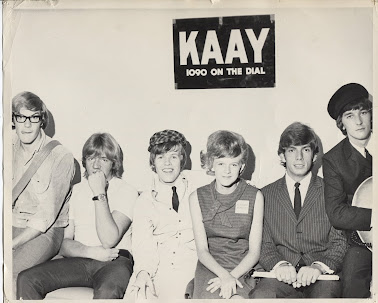 Per Barry: "I don't think I've done this one before, but if I have, it's been quite awhile - Herman's Hermits and a lucky KAAY listener! And based on the expressions I see, Peter Noone is pretty much the only one putting on a really good face here." 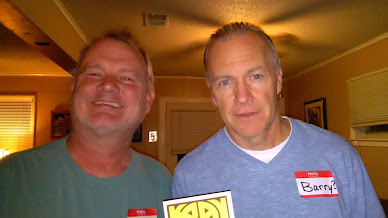 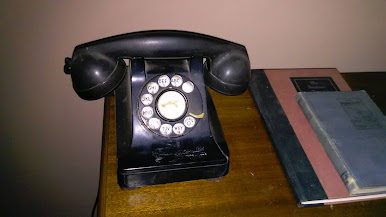 Thanks, Doug!  Barry and I are only a few days apart, I can't remember who's gt the lead, but I ain't fussing!

I am weeding through some e-mails that Doug has sent me, when I was in a bad period of my life.  Things are much better now, an I am able to play catch-up.  I apologize for the delay on some of these posts.

Folks, when I visited the transmitter in April 2012 with David B. Treadway and Jerry Sims, we could have carted away a truckload of stuff in the junk pile, if we knew we wouldn't get in trouble.  Good friend of this blog Doug Virden visited the transmitter site back in 2017 and grabbed a couple of items and shipped them to me.  At the time I received them, there was a lot going on in my life, so I didn't get to mention them and they went into storage.  Here's what Doug said in his e-mail to me:

"Let's not forget the reason I was able to visit the KAAY transmitter building, the reason being was to pick up a remnant from the old RCA transmitter for Bud.  I  ended up taking a meter and some tubes which I sent Bud a few weeks ago.  I  got to take me home a meter and some tubes too (see pictures below).  I will let Bud do the honors of posting what he received, here are pics of mine."

I need to be ashamed of myself...and they got here safe and sound.  Here are Doug's: 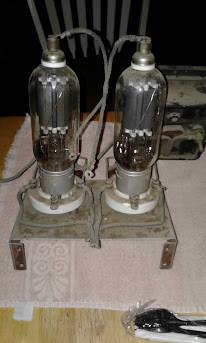 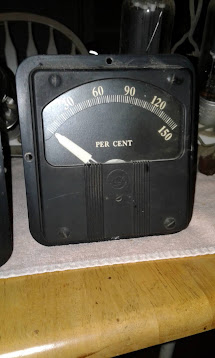 These pictures are of part of a pre-driver power deck (the tubes) and modulation meter (percent of modulation) that Doug has.

The pictures below are the articles Doug sent me, a kilovolt meter and more driver tubes: 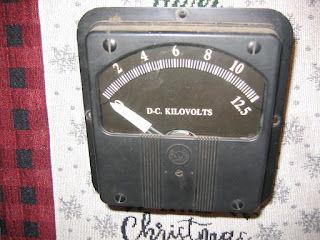 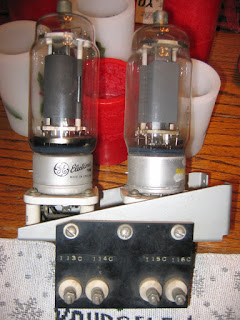 These tubes are sitting on a little different deck than Doug's tubes...

The tubes in my picture are "813" tubes, and are high-wattage tubes many of us Amateur Radio operators "(Hams") use in our high-wattage amplifiers.  Our amplifiers for our service are limited to 1,500 watts of power, so I think these had to have been driving the much larger tubes for full 50,000 watts potput.

The kilovolt meter is just that: it measures how many thousand volts are flowing to a particular part of the system.  It's no wonder safety switches abound in high-power transmitters, if you touch something in error, you're history!

Thanks, Doug, for sending these to me!  I apologize for taking so long in getting them posted...

Folks, some sad news on Tm Bigby from Doug Virden:

"One of the original DJ’s at KAAY has passed away.  Tom Bigby passed away Monday January 4th (2021, bs).
Not long after KAAY launched he was kicked out of the studio by government officials to bring the people of Cuba information concerning The Cuban Missile Crisis.

He later rejoined Mike McCormick at WLS in Chicago.  Are there any of the original DJ’s from KAAY who are still alive?" 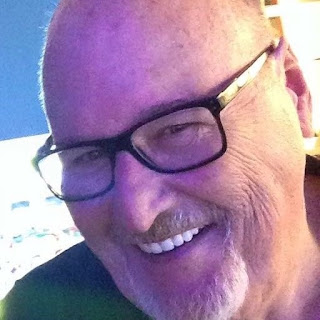 " ALL ACCESS hears from several sources that TOM BIGBY, the sports radio programming pioneer who developed stations like WIP/PHILADELPHIA into powerhouses, died MONDAY (1/4)(2021, bs) in TEXAS. He was 76.

BIGBY spent 15 years as PD at WIP, shepherding the station's caller-driven "guy talk" format into national prominence, and programmed KRLD-F (105.3 THE FAN) and WXYT-F (97.1 THE TICKET)/DETROIT before adding corporate duties as VP/Strategic Programming for CBS RADIO. He also programmed KRLD-A and KLUV/DALLAS, WIFI and WPHT-A/PHILADELPHIA, WNEW/NEW YORK, and KFI-A and KOST/LOS ANGELES, and served as OM at WYSP/PHILADELPHIA before retiring and launching a consultancy in 2011."

So many of The Greats are heading to Radio Heaven recently...rest in peace, Tom....

Thanks to Doug for this news.

Happy 2021 Everyone!
Here's a couple of new aircheck posts, courtesy of Russell Wells.  He obtained these and posted them on a KAAY Facebook group, and approved the re-post to this Blog.
The first is a composite aircheck of Wayne Moss doing middays on KAAY on various days in 1976, some of them from August 29 of that year.  Wayne is in his usual good form here.  The aircheck includes two promos of interest, celebrating Beaker Street's "8th anniversary on September 10".  That would indicate that Beaker Street began on about that date in 1968.   Other accounts, including one written by Clyde Clifford, have put the beginning of the show as late 1966.  So, was this promo in error on the anniversary year?
Here's the entire aircheck:
(or download here)
Here is one of the promos: (or download here)
---Greg Barman
Posted by   at 3:25 PM No comments: 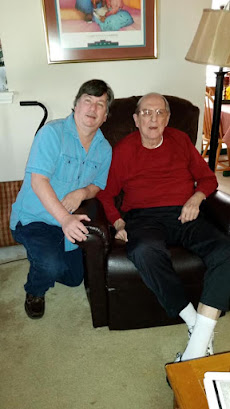 "This is a photo of Jim Hankins (Mike McCormick) 1st Program Director of KAAY. This photo is courtesy of Jeff Roteman and was taken in January 2016 a couple of years before he passed away."

Per Tom Bigby: " Worked for mike at kaay. And many years later at wls. Rip Mike. Hope Patty is well."

So, it's from 7th Street, probably late '60s, and...it's a black guy in front of the control board! Maybe just a visitor, but anyone have any idea when KAAY maybe hired their first African-American? And if so, maybe it's this guy? 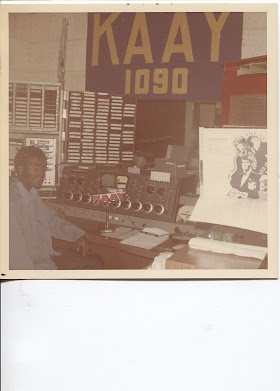 Posted by "Pea Gee"on Facebook, a story about Phil Rowe, a.k.a. "Phil North": 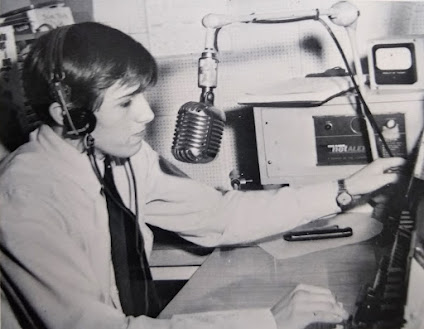 "By the time Phil Rowe was in the sixth grade at Greenwood School, he had developed a passion for radio and broadcasting. Phil would tape little "radio shows" and play them over the phone to his friends. In junior high he started hanging around real radio stations, sweeping the floors and reading the occasional weather report over the air.

In high school Phil was a full blown broadcaster. He was the night time DJ at Hot Springs' radio KZNG. On weekends he traveled to Little Rock where he became "Phil North" on powerhouse KAAY. Phil's voice could then be heard from the Canadian border all the way to Cuba."

Unsure of where this picture was from, but we'll have to trust "Pea Gee" on it!

So, anyone remember this guy? Not on air talent, but a salesman from the '60s and '70s by the name of Monroe Looney, and I think he sold for several other stations in addition to KAAY. 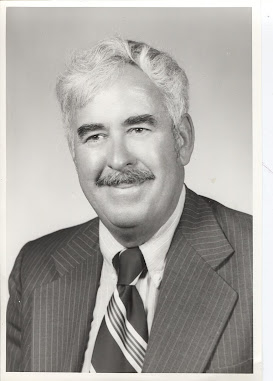 And a funny story about a saleswoman:

Barry Clarke McCorkindale
I've got a quick fun Lyndae story. After we were all brought under the same roof on Wellington Hills Road off of Chenal, they were having a sales meeting in the main conference room, probably in 2001 or 2002. I was coming out of the business office and through the sales area and saw Lyndae, and asked her, "Uh, you not going to the sales meeting in the conference room right now?" And Lyndae's response was, "Oh, Barry, I don't have time for that foolishness. I'm trying to actually work." Loved it!
Thanks, Barry!
Buyd S. (staceys4@hotmail.com)
Posted by   at 8:42 PM No comments:

"This is how I got the information that Mike passed away in January 2018."

From blog friend Doug Virden comes this vintage KAAY poster and in his words:

"It was announced today (e-mail dated 12/20/2020) that the Arkansas Razorbacks would take on the TCU Horned Frogs in the Texas Bowl on New Years Eve so the thing to do is post this vintage poster of a former Southwest Conference rival.

Nowadays a team's name and logo are patented so something like this can’t be done anymore." 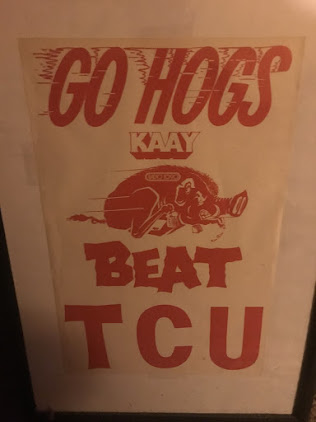 Toys For Tots, on KAAY 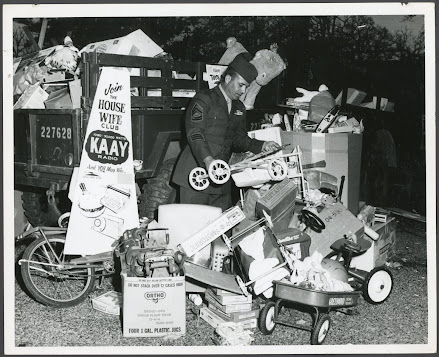 Thanks to Barry McCorkindale posting this on Facebook!  I had never seen a picture from those times.  I had mentioned years ago in a post here that I'd wanted to take vacation during Christmas, drive up to Little Rock from Mobile, AL and work with the Toys For Tots program.  Thaty's how much I loved KAAY.

Unfortunately, being of meager means for a teenager (I was working to put myself through school and college and taking care of cattle on our farm), I just couldn't take off.  But this is a great memorial picture, which brought back great memories.  Thanks, Barry Mac! 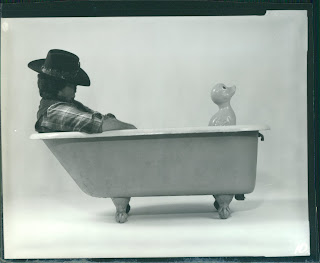 I just found this on Facebook on one of Barry Mac's posts...another bit of history!  Picture above and explanations follow:

Cliff McGaha
That's me in the bathtub. Had a lot of fun doing those ads with Ray. Ray was so strange. He would not let anybody see him doing Ram's voice. Even me. He would take my hat and cover his face.
Barry Clarke McCorkindale
YOU'RE the one! I'd posted a "Ray & Ram" picture from this time period of 1980 back a couple of years ago, but no one could definitely identify who "Ram" was. Did you work at the station?
Cliff McGaha
Barry Clarke McCorkindale
I wore several hats. I started as an engineering intern from UALR s RTV dept. I worked under Dave Montgomery. I became so close with Dave he was my Best Man when I got married in '85. I helped build and ran the Portable Party Machine. If you ever saw the T-shirts for the party machine I designed those too.
Cliff McGaha
I retired from the audio and video business but noe I have McGaha's Gizmo Studio. I build and sell Bluetooth Art pieces from old radios. If your interested you can see and hear them at Consign Design in Maumelle.
Barry Clarke McCorkindale
Never met Dave, but remember the name very, very well. And I know about Consign Design, as I work at Martinous, and we recommend to our customers who have rugs (NICE rugs) they're trying to sell to contact them. Sounds like I need to get out there and check out what you got!
Cliff McGaha
Barry Clarke McCorkindale
I got to work with the whole crew from Rockford. C.David Hamilton, Joe James, Dan Campbell and Jack Randall. They were a crazy bunch. Talk about being dipped into a bunch of DJs. Dave and I took them out as hosts to make extra money on The Party Machine. We travelled all over Arkansas and even up into Missouri. KAAY was the only station they could get late at night in some of those places. I even did a dance on the Hogtrain going from Little Rock to New Orleans for the Sugar Bowl against Alabama. The party machine was built using Cart Machines so we were the only dance system that could handle the bumpy ride in a mail car behind the Locomotive.
Barry Clarke McCorkindale
Still remember Jack Randall's tag line he used, I think, every day - "...with the fury of a thousand jungle beasts..."
Thanks to Barry Mac on this Thanksgiving 2020!
Bud S. (staceys4@hotmail.com)
Posted by   at 7:42 AM No comments:

A "Beemobile" For KAAY? 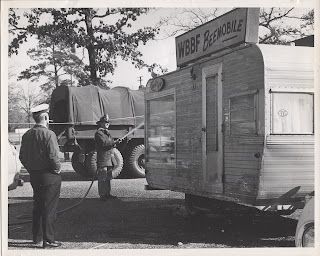 From Facebook, posted by Barry McCorkindale and commented on by Dale "Clyde Clifford" Seidenschwarz:
"
One of the LIN chain at the time. WBBF didn't want it. Pat Walsh somehow snapped it up.
I did a bunch of remotes in that thing. We did a lot of Toy Hills in it.
It went down in it's own funeral pyre on the way back from a remote in Conway.  I was in the Marine Reserve unit and my best friend Wayne Moss did a couple Toys for Tots events glad we got to work together."
Barry: "I KNEW Dale would have some insight into this, thanks!"
Thanks, guys!  Bud S. (staceys4@hotmail.com)
Posted by   at 6:51 AM No comments:

Just look back at our Posts here for A Warehouse, which has been advertised on Beaker Street...here's a flashback for you: