Once again, history is uncovered!  Jonnie King sent in a picture of himself...well, let me allow him to describe it:

Hope you are okay and can get some rest occasionally ! I found this photo and thought you might like to Post it when you have time.

The attached photo is myself (on the left), and 2 members of a then-new St. Louis group called "The Murge"...headed by my old St. Louis friend, Steve Cummings (Steve Cummings & The Classmen with Gayle McCormick).

(NOTE: The apartment I lived in had just been built around 1968 when I moved in May 2, 1969. It was a nice/clean/new one-bedroom apartment, completely furnished, air-conditioned, dish washer, garbage disposal, panelled walls. Water, Electricity & Gas were also included in the rent. What was the rent ? $135.00 per month !!)

The name of the Apartments were "The Jo-Mar Apartments". The manager at the time was Jerry Boyd, and his wife Sandy. Great friends...and, Jerry was also from St. Louis, like myself. And the $135.00 rent was not raised in all of the time I was there !!! 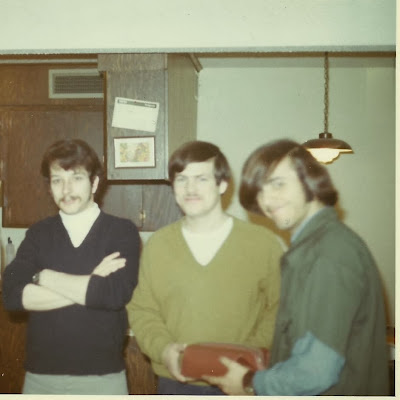 Here is another aircheck from the Gary Pfeifer collection -- Tom Robbins sitting in for Mike McCormick on May 16, 1968. It runs from 11:09am to 11:39am. It's mostly untelescoped, but some music and the full COMEX newscast by Ron Owens was not recorded.

I don't know anything about Tom Robbins, if that is his real name or that of a LIN Board member.  If anybody knows more about him, feel free to comment.

In June, this aircheck was re-posted from the old blog.  Actually it was the first hour of a THREE-hour telescoped aircheck of Beaker Street from the night of June 1-2, 1972.  I don't think the last 2 hours of the show have ever been posted.  So here they are, starting at Midnight June 2 and running thru the beginning of Beaker Theater at 2:00am.

This was DX reception of KAAY at my home in Evanston IL, just north of Chicago.  The signal varied but as you'll hear it often boomed in as strong as a local station.  Simply amazing.

This is the first of several contributions from Gary Pfeifer, an aircheck collector and KAAY fan.  He has submitted a batch of airchecks that you'll be seeing over several weeks, mostly new material for this blog along with a few airchecks that were previously posted but are now available with slightly better audio quality.

Gary's collection includes a bunch of Sonny Martin & George Jennings airchecks.  Here is an untelescoped one from Monday January 31, 1972, from about 6:41am to 7:15am.

This feature on KAAY is no longer accessible to free users of the Arkansas Business website, so I’m reposting it in document form.

The 20 Arkansas Icons feature was part of the 20th Anniversary edition of the Arkansas Business magazine, and since the magazine started in 1984 this probably appeared in 2004. The Icons are defined as "recognized as representative of the state even by non-Arkansans - people, institutions and phenomena that are uniquely Arkansas." So KAAY is among icons such as Bill Clinton, Billy Bob Thornton, Central High School, Wal-Mart, and the Arkansas Razorbacks.

I have to say it is a shame that KAAY is barely a fraction of the Icon it once was, which makes it all the more important to preserve the legacy. 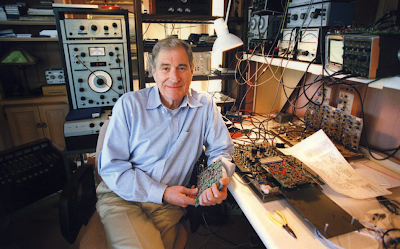 Via e-mail from Dave Montgomery:

This man touched the entire world with his work....

And for those of you who prefer a 'scoped version (I personally don't... I LIKE the unscoped versions), here is that version, again compliments of Greg Barman:

Dear reader and visitor, you know I RARELY toot my own horn...but I was honored when Ali Welky of the Butler Center in Little Rock sent me this notice (edited for brevity):

The Encyclopedia of Arkansas History & Culture is proud to announce the release of our first ever venture into print: the Encyclopedia of Arkansas Music. The book—published by Butler Center Books—is composed of more than 150 entries from the EOA website on all subjects musical. It also includes an introduction covering centuries of music in Arkansas, overviews of musical genres, a musical map of Arkansas, and a plethora of marvelous color and black and white photos.

What’s even more exciting is that you’re a part of it. Your entry on KAAY is included in the book, p. 120!

We would be honored if you could join us to celebrate the book’s launch in Little Rock on Sept. 19 at 5:30 p.m. in the Main Library’s Darragh Center."

"Even if you can’t make it to the event, the book can still be yours!

It is for sale at bookstores around Arkansas (including River Market Books & Gifts, WordsWorth Books, and Barnes & Noble); from Butler Center Books’ distributer, the UA Press (http://www.uapress.com/titles/butler/welky.html); and from other online retailers such as Amazon (http://www.amazon.com/Encyclopedia-Arkansas-Music-Ali-Welky/dp/1935106600/ref=sr_1_3?s=books&ie=UTF8&qid=1377535400&sr=1-3&keywords=arkansas+music) and Barnes & Noble (http://www.barnesandnoble.com/w/encyclopedia-of-arkansas-music-ali-welky/1115985360?ean=9781935106609).

Thank you for joining us in preserving and celebrating Arkansas’s musical history and culture.

Unfortunately, I will be unable to attend for several reasons, but I intend on obtaining the book for my birthday next month! 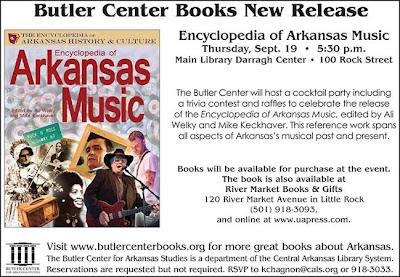 ...be sure to thank every first-responder, fireman. law enforcement and military person you encounter today...and make the effort to call at least ONE of the same today....

Here is Part 2 of the aircheck leading into Beaker Street at 11pm; again, Clyde Clifford has taken over for Phil North while the latter is away for a few days.

Beaker Street begins with a live version of "Johnny Be Good".  Can anyone recognize who the singer is?

Clyde is a professional, handling both "prime time" and Beaker Street... a very candid example and fun to listen to.


A telescoped version of this aircheck is coming up.
Thanks again to Dave S. and Greg Barman for their dedication to the blog!

From time to time we receive comments, which we happily attach to the relevant posts.

Sometimes it's hard for readers to see when new comments are posted.  So, here are a couple of comments that arrived in the past week, and they are interesting enough that they deserve a posting of their own:


I recall my friends and I sometimes driving around to find a spot to catch the bounce so we could listen to your show. For us in the Twin Cities, Minnesota, there were certain areas where your station would come in pretty good without the signal dropping fully and some areas where is would fade out completely at times. But it didn't always stay that way as nights with weather disturbances would move things around. Most of us would pile in 1 or 2 cars and drive to the closest hot spot was previously and see how it was. If the signal would fade out too often or for long periods of time, it was on to the next spot or explore for another place to hear those tunes and your commentary/insights on the music. That bit of adventure sometimes made the journey to listen all the more interesting. Needless to say, we all enjoyed the time spent with you and getting down with the music and the psychedelic sounds.


Speaking of the transmitter... HELP !!!!! I can't find anyone to communicate with (like maybe Dale/Clyde) about a burning Beaker Street question. WHAT was the intro montage of songs Dale would play at the START of each Beaker Street in 1968? Specifically, part of the montage was a male singer/group singing "Candy, my vibration".... or something. Almost like Deep Purple... but it wasn't them. Does ANYONE on the planet know what that particular song in the intro snip was from? I can't find it anywhere... can't find a reference to it... yet I KNOW I didn't dream it... esp since I listened to Beaker Street about every night it was on in the 60s.
on VIDEO: A Visit To The Transmitter Site
Anonymous on 8/23/13

Thanks to Greg Barman, our "resident audio guru" for finding this tape, transferring it to digital and getting it in.  I don't think we ever had these versions, (part 2 to follow), but I do remember Clyde Clifford taking over for Phil North at one time.  Here's Greg's comments:

"This is an untelescoped aircheck of Clyde Clifford on KAAY from Saturday night, April 15, 1972.  But he's not doing Beaker Street, instead he's doing Top 40, subbing for Phil North.  Apparently, Phil was called away unexpectedly so Clyde came in a few hours before his regular 11PM Beaker Street show and played the hits.  The faster-paced Top 40 format really isn't Clyde's forte, the results are interesting, but he got the job done, including two 5-minute newscasts.

"I got this aircheck from a collector in Iowa about 10 years ago and I don't know anything about who originally recorded it.  It's local reception, an untelescoped recording starting around 9:30PM with a few breaks or blips here and there.  Note the 2nd song after the 10PM ID and the singover jingle over the intro to Ocean's 'Put Your hand In The Hand.' "

Many thanks to Dave S. and Greg Barman for continually digging in "the pile"!

I'd just heard from Greg Barman, our "resident" audio technician, about something he found while doing research:


Sonny Rhodes, a journalism professor at the University of Arkansas at Little Rock, is tackling a book project on KAAY-AM, 1090, a Little Rock radio station that began broadcasting in 1962.

"I think it's a fascinating piece of Arkansas history. There's not been a lot documented about radio history, especially in Arkansas," Rhodes said last week.

Fans and former employees of the old KAAY celebrated the 50th anniversary of its launch Sept. 14 in Little Rock.

"It had an interesting format in that it was sort of ‘all things to all people,'" Rhodes said. The station would broadcast reports on livestock prices for farmers, top 40 music, religious programming and "Beaker Street," a three-hour night program that "was really one of the forerunners of underground music programming," he said.

Early on, around the time of the Cuban missile crisis, KAAY also used its broadcast range to point American propaganda toward Cuba.

KAAY was the top-rated radio station in Arkansas through the 1970s and was heard in other countries because the 50,000-watt station's signal reached so far at night, Rhodes said.

"You could hear it all the way from Canada to Argentina," Rhodes said. "The sun interferes with AM signals, so at nighttime nothing interferes and the signals travel a lot farther."

KAAY is still on the air, but was sold and converted to all-Christian broadcasting in 1985.

Robinson wrote his doctoral dissertation on KAAY, and the book is a result of that project.

Rhodes is currently researching the book, plans to conduct interviews with the famous former KAAY radio personalities who are still alive and is adapting Robinson's academic paper to appeal to an audience outside of academia. Rhodes hopes to have the book finished by May, he said.

Rhodes and Robinson have not yet found a publisher."

I'd also like to clarify the statement about the sun affecting radio waves: during the day, the sun causes the 'F layer' of the atmosphere to divide into what is called the 'F1' and 'F2' layers and are more porous to radio waves.  At night, both layers recombine and become more dense to radio waves, causing signals to 'skip' longer distances.  Radio propagation is a fascinating science and is worthy of basic study, of you're interested in radio and/or communications.

Thanks to Greg Barman for this catch!  We'll be waiting for the book to come out....