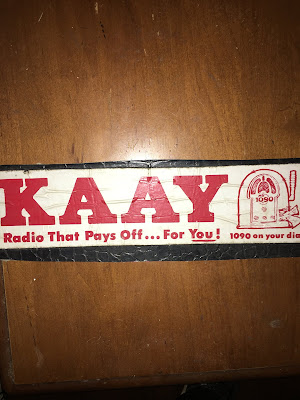 (I have to admit to being tardy putting this up for Doug; I have been, unfortunately, very busy...)

Beaker Street Returns to the Airwaves Next Month

If you read the comments in the previous post in this blog, you'll see some remarks about "having Beaker Street back".  Well, one of the posters pointed out that this might indeed be the case --- there is an article in the Arkansas Times, dated January 7, stating that Clyde is planning to resume his Beaker Street broadcasts next month!

I'll quote just a bit from the article; you can find the whole narrative at https://arktimes.com/entertainment/2020/01/07/beaker-street-is-back:

“Beaker Street,” Clyde Clifford’s pioneering late-night radio show, is back on the air....  with Clifford’s (real name: Dale Seidenschwarz) retirement from a decades-long day job in the rearview mirror (barely), the beloved rock radio bulletin is slated for a revival on Arkansas Rocks, a coalition of veteran radio talent that, like Clifford, skews less toward stuff like “Hotel California” and more toward the likes of “Traveller in Time.” Stay tuned for more on Clifford’s return to the airwaves, scheduled for February 2020.


All we have right now is the gentleman’s agreement between all of us — because we’re all good friends — that “Yep, I’m back. I wanna do it. It’s too much fun not to.” We also need to — and this is so cool, because so many people are into vinyl now, and you know, a lot of radio stations don’t have turntables.  But he said, “Look, if there’s any way you could install a couple of turntables, because there’s a lot of stuff I want to play that’s on vinyl that I wouldn’t be able to play without a turntable.” So we’re going to get those installed, too.

So, there are some details to be ironed out, but there is also some potential that we will once again hear Clyde on the airwaves (or the stream, which you can get at https://arkansasrocks.com/) .
Let's all stay tuned.

P.S. Thanks to the poster of the comment who alerted me to the Arkansas Times article!