Giving thanks, the KAAY way:


A. J. Lindsey thought one of the voices was that of John K. Anderson; he knew the other was George J. Jennings.  Can anyone substantiate this, please?  here's two links he had up on his blog, but the link within the link may not work:

Thanks be to God for all we have...and, speaking for all here at The Mighty 1090 KAAY Blog, may you all have a blessed Thanksgiving!

...And Then, Beaker Street Changed A Little...

Somewhere after the "Dreamscape" airchecks we've presented to you in 1970 and somewhere in 1971 (and maybe a little later?), there were some changes to Beaker Street...

One was the intro using the Moog synthesizer version of "House Of The Rising Sun"...the other was that the background music was changed to "Cannabis Sativa" from the "Head" album...both very interesting tunes!  Greg B. and I had been discussing bringing these back for your enjoyment...and I was able to find the Moog "House Of The Rising Sun" and download it from the web.

There are some interesting historical links about the Moog analog synthesizer on the web.  Dr. Robert A. Moog began in the 1950s selling theramin machines in kit form.  He later built and sold complex synthesizers under "R. A. Moog Co.", then "Moog Music" and later "Moog Electronics".  The first commercially-sold Moog synthesizer prototype was commissioned by the Alwin Nikolais Dance Theater of NY in 1964.

Jumping forward, on the DECCA label, Claude Denjean utilized the Moog to lay down tracks for numerous pop songs of the then era...the one we're concerned with, since it has a history with Beaker Street is "House of The Rising Sun" 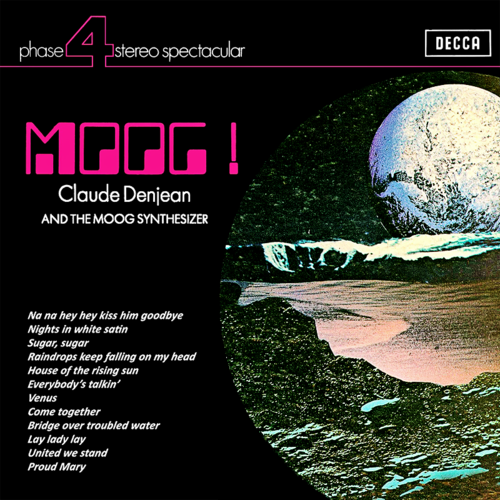 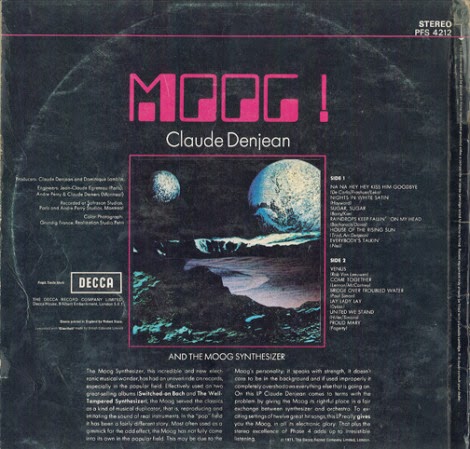 I cannot remember the link where I found the music...and things change on the web almost daily, sometimes.  Nonetheless, I'd love to find this album and get it for my very own!

Now, for the moment you've been waiting for:  the song itself!  Hit it, Greg! 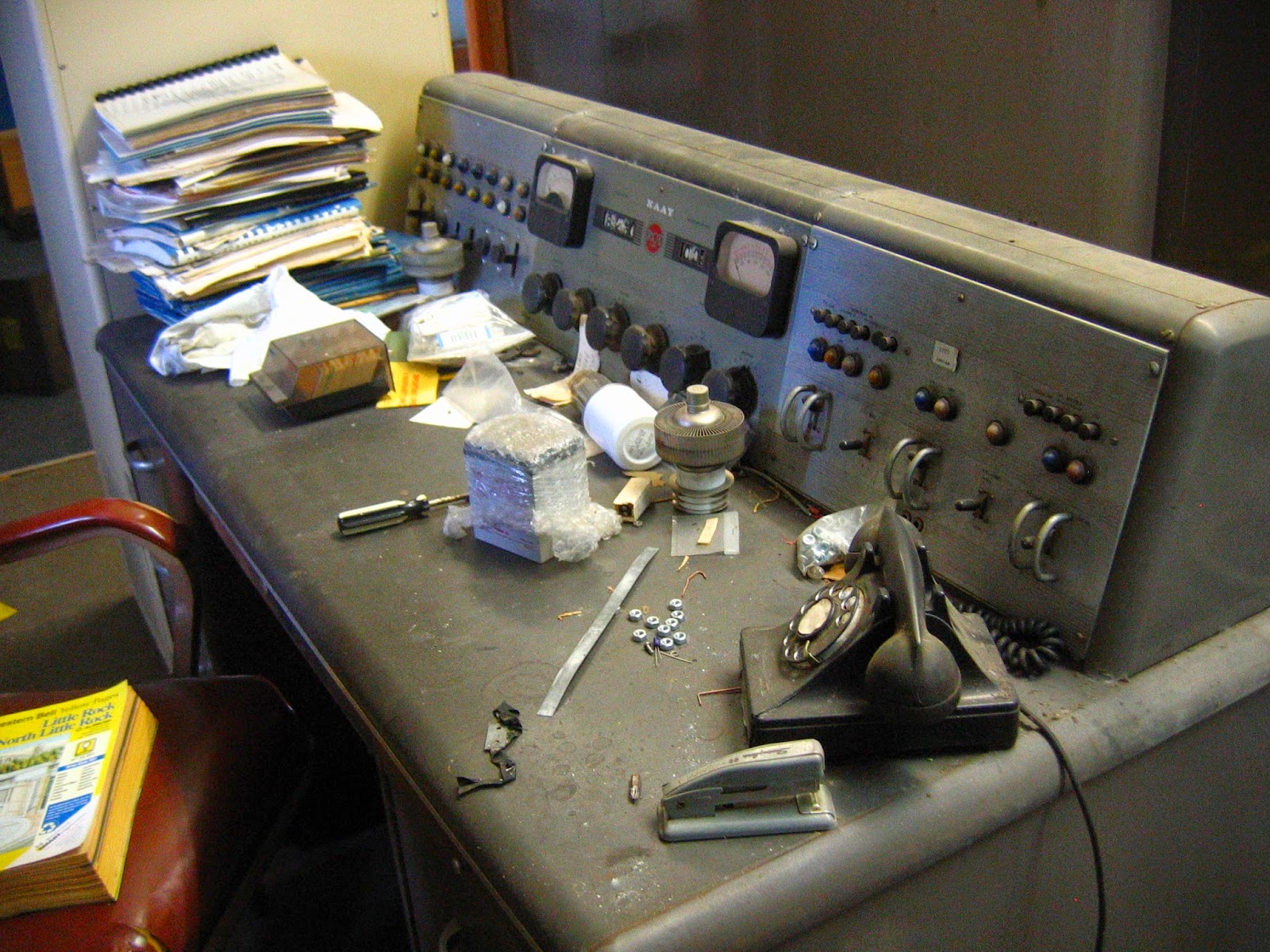 There's been some messages and inquiries about "the phone" on the desk where Clyde Clifford held sway over "Big Momma" as David B. Treadway calls the big 50,000-watt RCA transmitter out in Wrightsville, AR...and here's the phone on the desk, in the picture I took when I was THERE in April 2011....

Doug Virden noted, "Here is the story I got from Barry about the phone @ the transmitter building. It was still hooked up and working until around the mid to late 90's. Management realized they were paying a 20 something dollar a month lease to have a phone hooked up out there so management shut it off. This was before most everyone had cell phones. The reason the phone wasn't updated @ some point over the years probably because Felix McDonald wouldn't change it.

I believe that phone was the original one put in when KTHS moved to LR in the early 50's. That was the phone style in the 40's and through the 50's. I believe when 1090 changed to KAAY those phones were already phased out."

Thanks Doug, and thanks for those who left comments on Facebook regarding "the phone"! 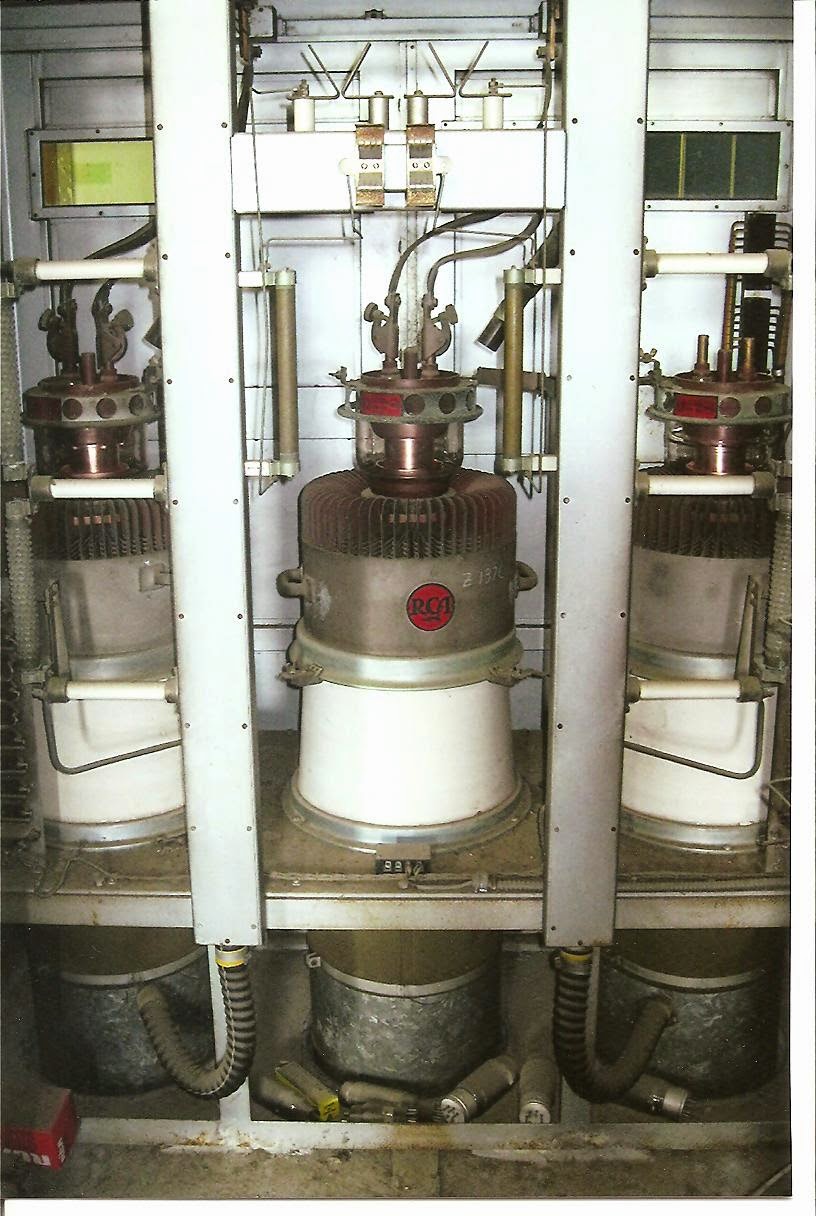 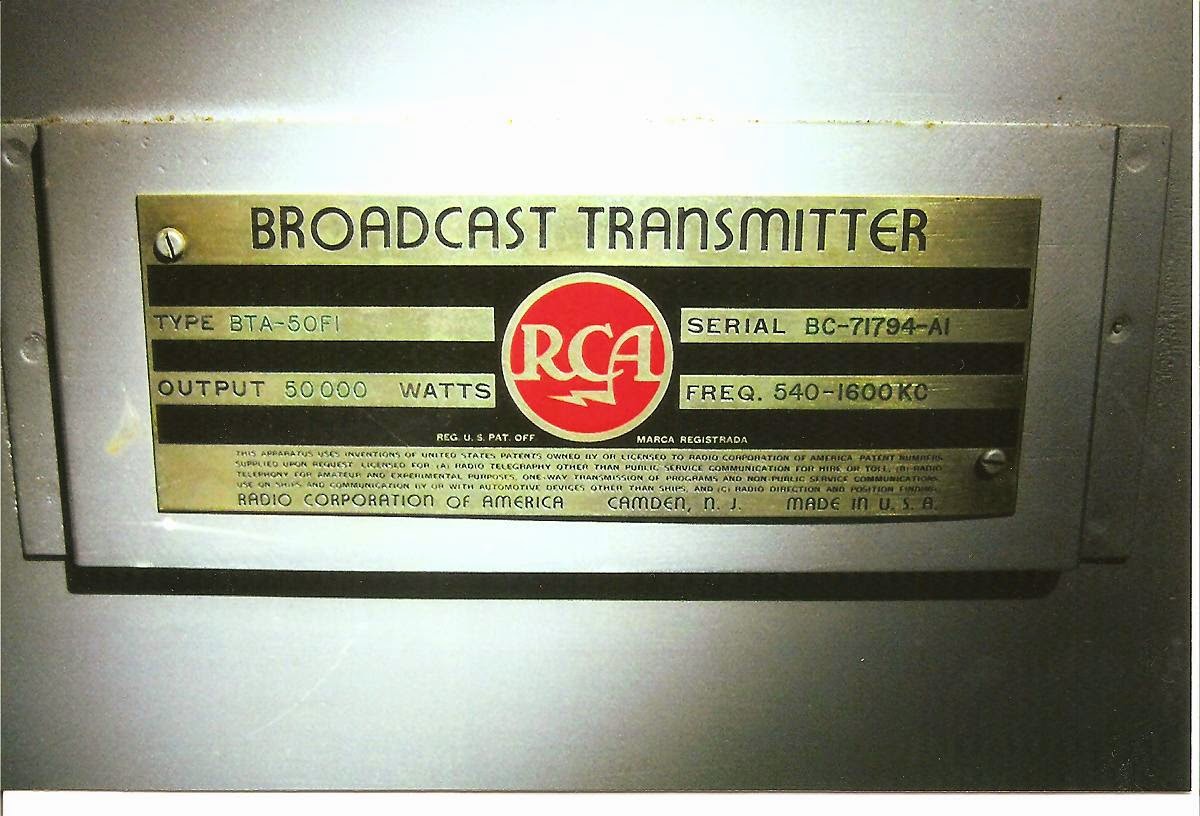 From this legendary transmitter emanated some of the weirdest sounds ever imagined, behind a soft-spoken, slow-talking but purposeful voice, the opposite of the fast-talking deejays of the day...that of the legendary "Clyde Clifford".  This is the last of the series of the early shows that used the "dream sequence" music behind "Clyde's" voice.  If you notice, the audio is so clear, you can hear the LP "pop" on "Deep Purple's" album on the song "River Deep, Mountain High"....there is some tape degradation, but it is only somewhat noticeable.

KAAY's signal was SO powerful, it normally blanked out virtually any atmospheric noise; therefore, the listener could hear almost every nuance of the broadcast.  When I had the in-line antenna amplifier on my car radio, all four speakers blasted "Beaker Street's" audio out- it was almost like I was listening to a studio-quality copy!  Also, where I lived near Mobile, AL, I was in the center of the southeastern path of the station's figure-eight pattern.  There was no escaping it!!!!

Again, rescued from the broken players of A. J. Lindsey's blog by Dave S., we bring you one more of what I consider the "early Beaker Street" version.  Later, we will post some later versions, beginning in 1971, when "Clyde" utilized the 17-minute "Cannabis Sativa" from the "Head" album....

OK, looking over my shoulder, Greg is huddled down, with his hair tied back and Dave has his copy of The Little Barn's catalog...I guess we're all ready!  From July 3, 1970:

Hey, let me go get my big silver peace ring from Little Barn...hit it, Greg!

"The Phone" At The Transmitter Site 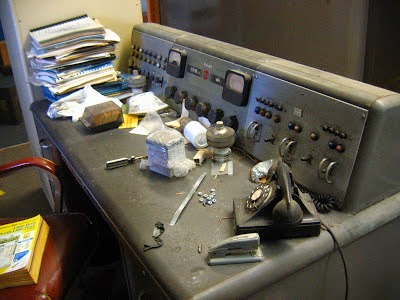 There were some messages floating around about "the phone" out at the KAAY transmitter site...here's some information from Doug Virden:

Here is the story I got from Barry about the phone @ the transmitter building. It was still hooked up and working until around the mid to late 90's. Management realized they were paying a 20 something dollar a month lease to have a phone hooked up out there so management shut it off. This was before most everyone had cell phones. The reason the phone wasn't updated @ some point over the years probably because Felix McDonald wouldn't change it.

I believe that phone was the original one put in when KTHS moved to LR in the early 50's. That was the phone style in the 40's and through the 50's. I believe when 1090 changed to KAAY those phones were already phased out."

I snapped this photo while on my trip to Little Rock back in 2011 and it was posted here back then, as well.  I also have a phone like this in my possession, given to me by a dear friend.  When he gave it to me, it had been wired for present systems- and it still worked!

Thank you, Doug, for your comments! 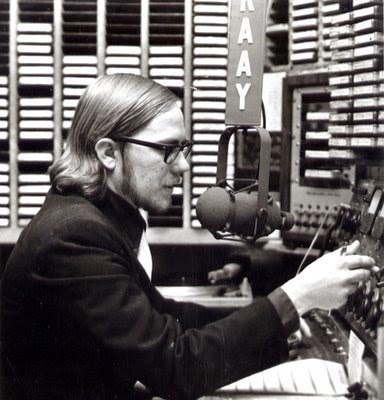 This is a picture of Dale Seidenschwarz, a.k.a. "Clyde Clifford", in the studio of KAAY, not at the transmitter...when I was at the transmitter in 2011, this is what David B. Treadway, Jerry Sims and I found (but we didn't DARE touch anything): 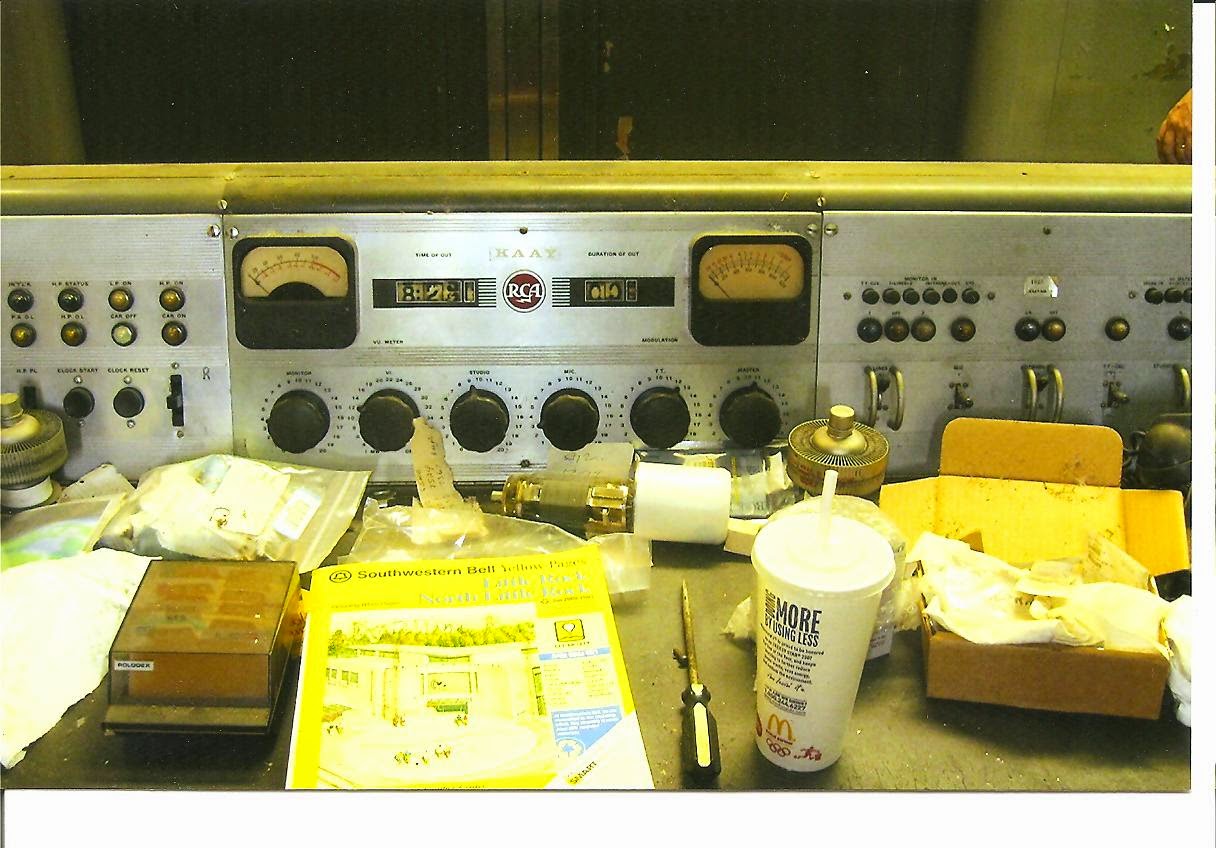 I wish I'd had the presence of mind to clear it all off and had taken a better picture...but it was from this position that "Clyde" mixed and managed "Beaker Street"

We're celebrating the 48th anniversary of "Beaker Street" this month!  Again, we're bringing you another chunk of audio from the basic time period which still used the "dream sequence" music from the movie, "Charade"...enjoy!

Uh, oh, Dave S. has let his hair down and Greg B.'s glasses have slid down his nose...all in anticipation of this audio Dave rescued from A.J.'s blog before the players went kerplunk!

Hold on folks, there's more to some! 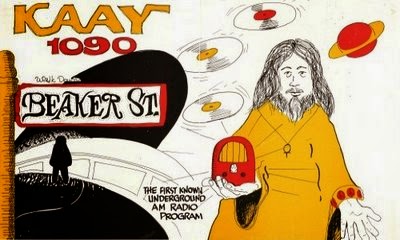 ...and the following continues!  Wow, who thought that a program, on a trial basis to fill up airspace, would become SO popular!  We don't have the exact date (I don't think anyone does), but the best recollection of all concerned was November 1966 when it all began.  One story has the idea being batted around at a party- and there are several...but, supposedly, upper-level management didn't think it would work.  It was wildly successful....

...so we thought we'd bring over some audio from the archives Dave S. saved from A. J. Lindsey's blog before the players died after A. J. passed away.  The audio hasn't been heard since, that we know of (unless one had the foresight to download it for themselves).

The versions you are about to hear (in several posts) are of when "Clyde Clifford" (Dale Seidenschwarz) utilized some background music from "the dream sequence" of the movie, "Charade".  I have downloaded and listened to the soundtrack from the movie and nowhere could I find that particular audio- nor has anyone else that I know of.  This "dream sequence" audio was played in the background to "hide" the fan noise of the 50,000-watt RCA transmitter only feet from "Clyde's" operating/control desk, well before he used Head's "Cannabis Sativa" in the early 1970s (and beyond).

I was there in 2011...and it was amazing to me, the genius of "Clyde", to be able to mask the fans only ten or so feet away.  The background music- both versions- were part of the allure of the show.  So, dear visitor, don your beads, get on your favorite sandals and tie-die T-shirt and let's go back a few years!  The versions we have are from 1970, but should be representative of those early days (daze?)...and if anyone has any audio from 1966 to 1970, we'd be glad to post it here, for everyone to enjoy!

I see Greg B. has his shades on and Dave S. has his hair pulled back in a ponytail already....