"From its earliest days, the future of KTHS was tied to both WFAA in Dallas and WBAP in Fort Worth. The outcome of this strange relationship unexpectedly worked to the benefit of KTHS, WFAA, and WBAP.

WFAA and WBAP came on the air within months of each other in 1922. WFAA found it sharing time on 1040 kHz with KRLD, owned by competitor Dallas Times-Herald.

Fort Worth and Dallas were distant Cities in the 1920s and the News and the Star-Telegram were not competitors. It is reported that Mr. Dealey and Mr. Carter held each other in high regard, so they decided to resolve the situation.

After negotiation, WFAA and WBAP came to an agreement with KTHS for WFAA to share time with WBAP on 800 kHz and for KTHS to move to 1040 and share time with KRLD. This change was approved by the Federal Radio Commission and became effective on May 1, 1929.

The shift to 800 kHz (later 820 kHz) was a good move for WFAA-WBAP, giving one or the other station access to the Dallas-Fort Worth market. It was also proved to be a good move for KTHS, allowing a power increase to 10,000 watts and paving the way for its move to 1090 kHz. KRLD found a full-time home on 1080 kHz and KTHS started sharing time with WBAL, a station that KAAY continues to protect at night.

Because WBAP could use 800 kHz for only half of the broadcast day, Mr. Carter bought KGKO-570 in Wichita Falls, Texas, and moved the station to Fort Worth as an alternate outlet for WBAP. Because it seemed silly to leave KGKO's facilities idle when WBAP was operating on 800, WFAA asked to use 570 and KGKO's call letters were formally changed to WFAA-WBAP-570. As an aside, a station in Benton, Arkansas, (now deleted) acquired the KGKO call letters and used them on 850 kHz for many years.

The WFAA-WBAP time share continued until May 1, 1970, when WBAP bought 820 kHz and gave WFAA sole possession of 570 kHz. WBAP became a National powerhouse while WFAA drifted along until leaving radio in 1983.

I doubt that KTHS had a great deal of choice. In the late 1920s, the new Federal Radio Commission was busily reallocating the broadcast band and little stations like KTHS were assigned to poor positions on the Broadcast Band or regulated out of existence. That is what reportedly happened to KFMQ-Fayetteville, one of the earliest radio stations in Arkansas. THe FRC assigned KFMQ to a frequency that was shared with a Fort Smith station and KFMQ either sold or just gave up.

Although both the Dallas News and the Fort Worth Star-Telegram had plenty of political influence, it appears that KTHS had powerful Arkansas Senator Joe T. Robinson on its side. The FRC file of the Joe T. Robinson Papers in Fayetteville probably makes for very interesting reading.

It has been said that the future is often determined by the past, and the dance of WFAA, WBAP, and KTHS might be a good example."

Thank you, Hollis!  Sometimes, the pointless frequency-shuffling done by the Federal Radio Commission (precursor to the Federal Communications Commission) probably made more sense to them than the radio stations....

VIDEO: A Visit To The Transmitter Site

Again, I apologize for not getting this on sooner...as Jerry Sims and I left the McDonalds' home, we had to drive back past the KAAY transmitter site.  Jerry agreed to let me video the grounds, especially since the gate was still open and the tech was still trying to get a transmitter up and running (the newer 50 kw was down and the tech was trying, unsuccessfully, to get a back-up 5 kw running).  So, I popped in another set of batteries and jumped to the task:

You can see the decrepit state of the building even then...back in the Summer and Fall 2011 postings, there may be one or two photos where one can make out a small tree growing on top of the transmitter building.

Thanks to the late Great Jerry Sims for driving me around that day and to another Great, David B. Treadway (and son) for also spending a lot of time with me that day, both at the transmitter site and back in town at KHTV.

....Richie Havens opened Woodstock in 1969.  Richie passed away, at the age of 72 years young, from a heart attack in April.  His ashes were spread over the grounds of the historical concert, which featured many, many entertainers.  Some pictures of the "ceremony" can be seen here:

You know what they say: If you remember Woodstock, you really weren't there....

I must apologize for not getting this on sooner..."life" has its way of getting priorities reshuffled.  Nonetheless, when I was in Little Rock in April of 2011 (see the series in the Summer and Fall 2011 postings), Jerry Sims, David B. Treadway and I visited Felix and his wife, just yards from the transmitter.  David B. had to get his son back to town and left before I thought to take this video.  It is a very short video, because I wasn't watching my battery level...

...however, Jerry Sims was discussing how he know some of the McDonald family and his business associations with them through radio & TV.  It was a very enjoyable hour or so...I wish I could have gotten some other, candid conversation, especially when they were talking KAAY history.  Makes me all the more thoughtful to keep a pocketful of spare batteries!

Here is the link, for your viewing pleasure:

As you can see, it was a very nice, relaxed atmosphere in their spacious sun room...but the acoustics were not too good.  You may have to turn up the volume a bit to hear what Jerry's talking about.

As mentioned in A. J. Lindsey's words below- a great way to remember George Jennings:

"A Great Way to Remember George!

Relive one of his newcasts. This newscast comes from January 1964. The newscasts were still at :15 and :45, later changed to the top of the hour.

Thanks to Mike McKinney a/k/a Jack Lee for several airchecks. This cut is a George J. Jennings newscast from Jan. 1964. I do the commercial in the middle for Holly Ham. This is a great example of a George newscast complete with Jimmy Fiddler at the end. Is anyone doing exciting radio news today?  Hearing this makes me want to shuffle through the 45s and find the fastest, hottest hit, cue it up, and be ready to blow the monitor out with more muuuuusic!!! (See earlier discussion of Jimmy Fiddler and how we got "free" Ampexes.) Even in 1964 "Hollywood" news was big. The news department was never excited about Fiddler, but I'm sure he added to the adult audience."

Did you catch A. J.'s Holly Ham commercial?

You can also search A. J.'s blog, just like you do here, for Jimmy Fiddler....

Thanks again to Dave S. for all his hard work on the audio of this blog!


For those of you who didn't see the Monitoring Times article that Bud wrote on KAAY (with the help of other folks on here) in the February 2010 issue, here is a re-posting. 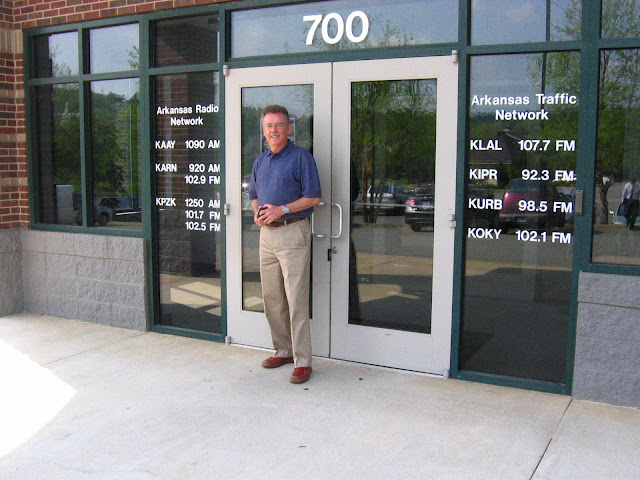 Just two years ago today, our dear friend Jerry Sims ("Sonny Martin", KAAY, 1963-68) passed on into eternity while practicing/playing on the softball field; temperatures were extremely high and dangerous.  I suspect this had a direct factor in his demise....

I also have suffered heat-related health effects, known otherwise as "heat stroke".  It was a scary experience the first time and I thought my time was "up"; the second time it happened, I recognized the symptoms and was able to react quickly.

As a public service announcement and in memory of Jerry, PLEASE watch out for heat-related problems such as heat stroke and heat exhaustion/prostration.  They ARE deadly; when I was a Paramedic, I witnessed others suffer and die because of extreme heat.

Please, if you must exercise or work outside during the summer, do it in the early morning, or at night; stay hydrated and cool as possible in all instances, even if you have to douse yourself with a water hose!  Life is precious and we want to keep you around!