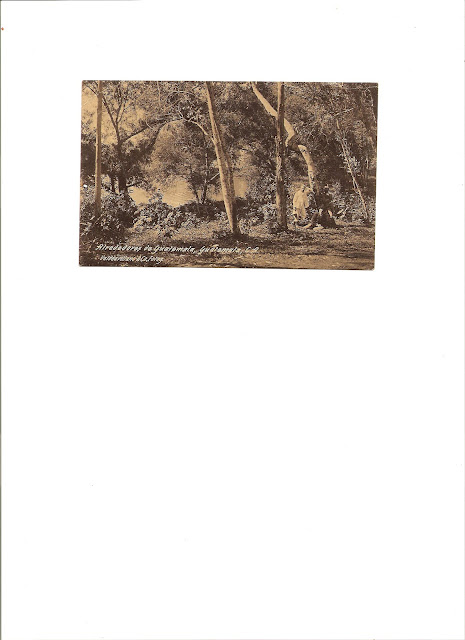 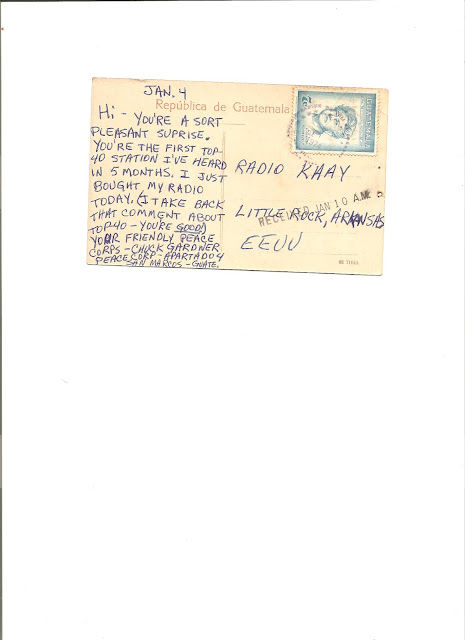 What a surprise!  A Peace Corps volunteer hearing a BIG piece of home!  I can't make out the actual year this was reported and recieved- the post mark is faded- but it is in the early 1970's as the other mail is that Wayne Moss has donated for this blog.

It just goes to show you, KAAY punched through the ether, entertaining people far, far away!

It was very kind of you to publish that stuff from Cuba, it’s been an instant time machine for me. I was a teenager by that time (1973), and all my friends and me were always awaiting till midnight for the Beaker Street. We were in the north western part of Cuba, close to the Gulf of Mexico and it always amazed us how in the world this AM signal could reach us from Little Rock. Now I live here in the US and take the opportunity to thank personally Clyde Clifford and the original KAAY staff for making possible even for the Cuban listener of forbidden music a program like Beaker Street.

Compliments of Russell Wells, here is a short clip of Ron Casteel and David B. Treadway on KAAY, June 23, 1983. Somewhat 'scoped, still enjoyable...and, I think, this is the only audio recording we have of Ron Casteel:

Kudos to Dave S. for his work in bringing this aural treasure to you! 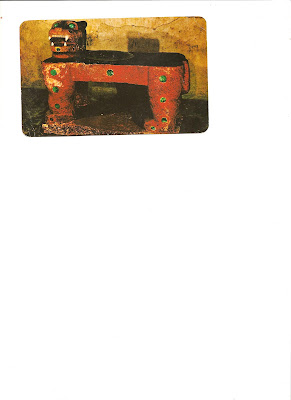 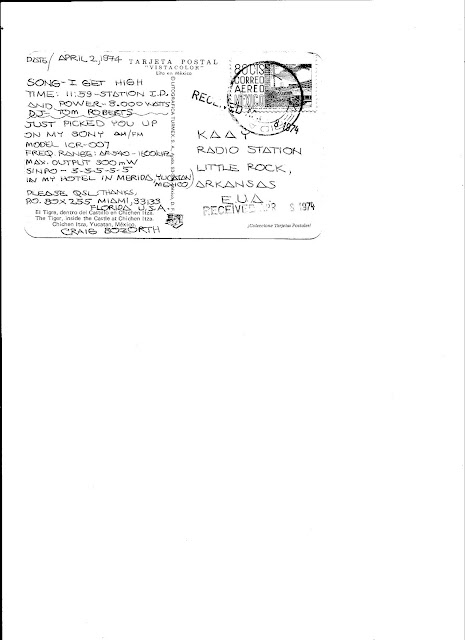 Here is a postcard mailed from Yucatan, Mexico from a listener from Miami, FL; apparently, he heard KAAY while on vacation!  The front of the card shows an interesting carved lion seat.

Please note that this is a true "DXer"- he included the information about the radio he was using and the signal strength codes.  He was listening to Tom Roberts- the time he notes is apparently during Beaker Street.

I wonder if he ever got a QSL card?  Thanks to Wayne Moss for this interesting and beautiful card!

April 2012 was notable in my part of Arkansas for how (as Ian Anderson put it in "Aqualung") the flowers bloomed like madness in the spring. I cannot remember ever seeing such lush growth of the honeysuckle, or having the fragrance of it be so nearly overpowering--in the best sense of that word.

It was unusual to the point where I wondered what it could MEAN. The smell would dang near follow you indoors! I was not about to complain over such a wondrous manifestation of the Creator's Hand, but I guess I have just enough Choctaw blood from my great-grandmother to where I wondered if it was a Sign.

Then came April 16th, with the news that Levon Helm was suffering mightily from a recurrence of cancer and wasn't expected to live much longer. Sure enough, he died on the 19th, taking a piece of my soul with him. It was especially grievous, coming so near to the loss of Earl Scruggs on March 28th.

I got to thinking that maybe the honeysuckle had known that Levon was dying--even before we humans got the word--and had decided to give him a gift on his way out of this world. Well, the blooms and the scent continued their pleasant onslaught undiminished through the night of April 26th.

On the morning of Friday, April 27th, the fragrance was GONE just as suddenly as if it had never been there. The blooms were still everywhere--on every possible fence and tree trunk--but their perfume had simply disappeared. The honeysuckle has not smelled since that day.

That was the day they buried Levon Helm. And people can call this a coincidence as long as they want to. 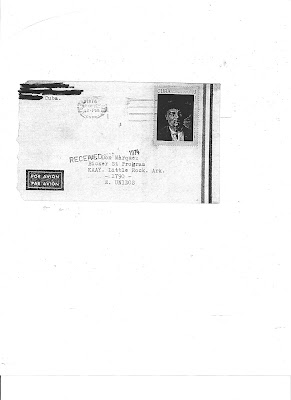 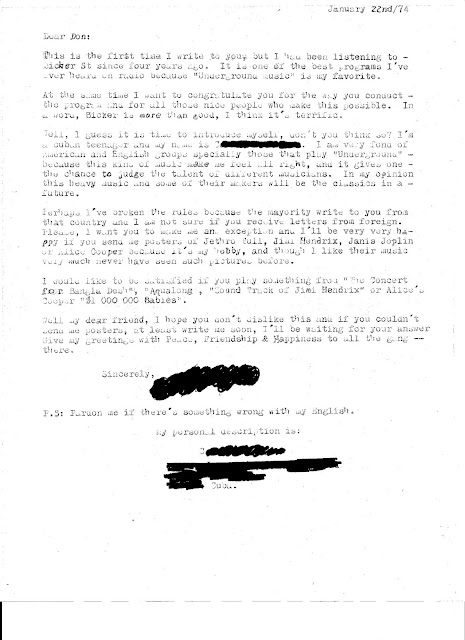 Here is a letter from a listener in Cuba who heard Don Marcus ("Don Marquez") while he was running Beaker Street!  This is the only letter Wayne Moss sent me which was addressed specifically to someone at KAAY.  Apparently, Don made an impact on this fellow!  I just had to include a shot of the envelope, since it was addressed to "Don Marquez"....

Hey Bud, I just received a copy of Aitken's book "Continuous Wave" and gathered a few more clues about the possible purpose of the tower that is shown in the picture.

Aitken says that Marconi pioneered the use of a vertical antenna to replace the horizontal antenna that was generally in use at the time.In 1900, the "raw" spark system was the only system in use. This was about 10 years before anyone knew how to generate a continuous (i.e.,sine) wave and even longer before anyone could modulate the signal with a voice. The Navy didn't get into the wireless business until the late 1900s and none of the original Navy stations were located on the Gulf Coast. However, the United Fruit Company was a heavy user of spark equipment and because Mobile is a port, I'm guessing that this was a Marconi spark station that was used by United Fruit Company (and perhaps others).

According to the book, "In the Caribbean and Central America the
United Fruit Company, through its subsidiary, Tropical Radio, operated
an extensive network of land-based stations and relied on radio to
control the movement of its famous 'Great White Fleet'."

Tropical Fruit invented and patented the crystal detector and was
later merged into RCA.

Because Marconi sold its stations as complete packages of equipment
and coupled with the use of a vertical antenna, it seems likely that
this was a Marconi-supplied station. 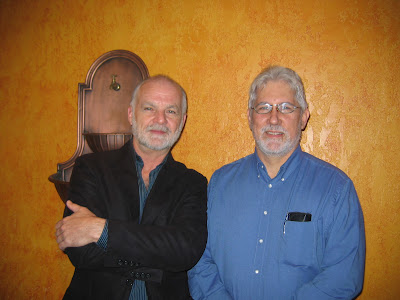 Catt Sirten grew up in Nashville, TN, so didn't listen to KAAY, as he was out of the main lobes of transmission, but he was aware of the Mighty 1090.  However, I have listened to Catt for many, many years on various radio stations around Mobile, AL.  His programs, Sunday Jazz Brunch (8AM-2PM Central Time) and Radio Avalon (weeknights, 10PM-12 Midnight Central Time) are reminiscent of Clyde Clifford's Beaker Street- in a jazzy sort of way.  Catt programs some of the most eclectic jazz around, from classic, to worldbeat, to fusion, to trance and everything in between, with some nice big band mixed in!

Catt told me that he is one of two people who are privileged to have radio shows of this sort (the other guy, I forget his name, is in California; Catt says his show is much bigger, but I can't see how- Catt's is pretty awesome!!! bs).  Catt is now working for WZEW, where these programs originate.  Other stations he's worked at (not in any particular order) are WERC, Birmingham, AL; WFBQ, Indianapolis, IN; WPFM, Panama City, FL; WMXC, Mobile, AL (who is airing their own Sunday jazz show since Catt left); WHMD, Hammond, LA; WTKX, Pensacola, FL; WCGQ, Columbus, GA; WAAY, Huntsville, AL; WHIL, Mobile, AL; WMSL, Decatur, AL; and the World Space Studios, Phoenix, AZ.

(Don Payne was also at WXUS, hired by Stuart McRae...bs)

I have been able to visit with Catt numerous times when he was on remote at locations here in and around Mobile; the picture above is of he and I at one of my favorite restaurants, Pintoli's Italian Cafe, just minutes from my home here in Satsuma, AL!

Catt does a remote once a month at Pintoli's and is well-received by the local clientele- in fact, many people travel to Pintoli's for their new brunch menu, and enjoy jazz while they partake of the cafe's geniune Italian cuisine.  Catt has graciously taken time in-between sets to talk with me, to share history and just to generally gab about many things in general.  After listening to him for so many years, I feel like he's family!  He really likes to hear from listeners- it spurs him on to find the most unique, tasty music to share!  To say he gets excited that someone listens is an understatement!

So, here's to another Great of radio, who's paths has crossed with people we know; it seems to me the radio business is a small, close-knit society, but that's my opinion.  There are a few lucky souls who get that gig, doing what they love- Catt Sirten is one of those blessed people and we're blessed to enjoy his programming.

For your listening pleasure, see the link in the right-hand sidebar, or click here:

Click on the "about radio avalon" tab for the podcasts and enjoy!

Thanks to Catt Sirten for being a friend of this blog!

Dear reader and visitor, we take/took it for granted that we could hear radio stations (and enjoy other media) without fear of reprisal.  The letters Wayne Moss has so graciously shared with us and posted here reflect the zeal others outside the United States had for listening to such programming- especially that of KAAY and Beaker Street.

You've seen the previous Habana Club Fan Letter, then KAAY's response letter...and here's the Club's "thank you" letter.  I tried to scan it in with the correct colors, but something was "lost in the translation"...the stamp was supposed to be brown!  Nonetheless, here is the letter, edited again of course, of the Club president who was apparently overjoyed at KAAY's responding to his letter (actually, there were two identical letters mailed at different times- only one was posted beforehand): 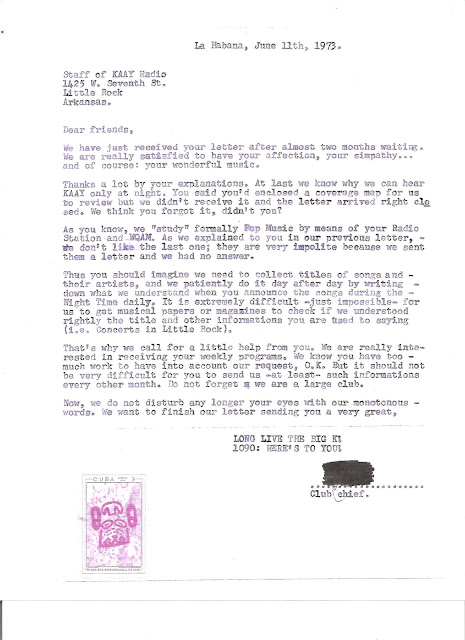 Should we here in the most free country in the world actually realize the privileges we have- and that we should have as much zeal for those freedoms we take so lightly!  More letters from Cuban listeners will be posted, as we have space and time...these letters are wonderful history and a testamant that KAAY put a monstrously BIG K signal 'way ouside our borders!

By the way, do any of you out there remember "onion paper"?  And Air Mail envelopes?  Very thin, very light, as postage between countries could be very costly...and these wonderful Cuban listeners were spending hard-earned wages to write to and follow our beloved KAAY!  Many of these letters sent to me by Wayne are of this type...so, stand by, don't touch that dial, more are to come!

From Doug Virden, re: the preparations for the upcoming KAAY reunion/anniversary:

"Have set a date for the 50th celebration, it will be Fri. Sept. 7th with the place still to be determined. It will be former employees of KAAY and listeners with RSVP."

So stay tuned here; when Doug gives me the location, I'll inform everyone. 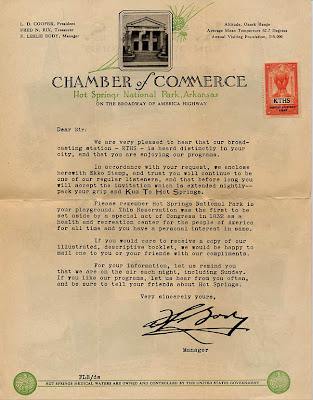 Ethel of Fayetteville recently inquired about EKKO stamps, as pictured above on this beautiful KTHS verification letter.

Radio stations used to take the time to write to their listeners, sending such great letters written on elaborate stationary and affixing their EKKO stamps upon them.  EKKO stamps then, as they are today, were highly-sought items and are collectable items today

Radio was a hobby, both to listen to and to operate, until other mediums came along, such as television and the Internet.  Suffice it to say, a part of the hobby was to collect these reception stamps, such as these below: 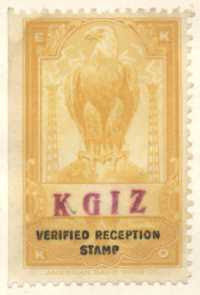 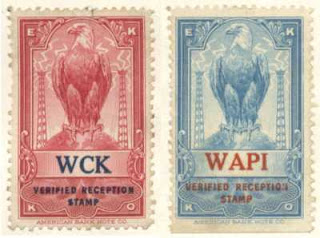 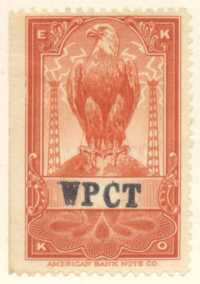 These wonderful letters and stamps evolved into "QSL cards"; to my knowledge, KAAY only sent out typewritten letters and QSL cards.  However, it is said that the EKKO Company went out of business, perhaps before World War 2, well before KTHS became KAAY.  For more information on these interesting reception stamps, see the links below:

Thanks, Ethel, for reminding me of this wonderful historical part of radio!