This hour, from 12 Noon to 1:00 PM, opens with Mitch Michaels (Nick Markel) at the news desk.  I think it is Mitch who announces Marvin Vines, KAAY's Farm Service Director, and the Farm Market and News segment of the day.

Marvin was killed in a farm accident in May of 1978, when a tractor overturned on him.  Many, many folks from governors to the general public attended his funeral.  Andy Vines, his grandson commented in A.J.'s blog...Andy, are you still out there?  For a bit of history from A.J. Lindsey's blog, see this link:

Some radio experts said the varied format KAAY employed would never work.  They were proven wrong.  Marvin Vines' program was an important one and was well received.  I grew up on a farm and, even though I wasn't in the business end (we sustained it for our own use and survival), I understand how important farm news can/could be.

Marvin is followed by Wayne Moss, who airs more great music.  Wayne sounds as great today as he did back then!  Mitch Michaels continues with the news.

(or stream/download here from the archive page) 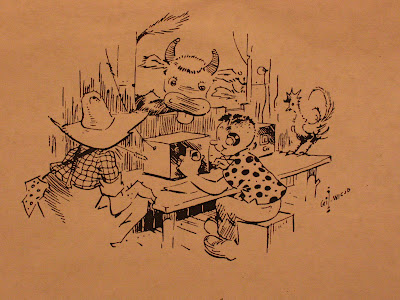 Looks like some folks enjoying radio there on the farm in the above picture!  (This was gleaned from an October 1958 issue of QST, a Ham radio production...but I couldn't resist!  The magazine was issued the same month and year I was born!  Bud)

Again, thanks to Russell Wells for contributing these audio files !