Russell Wells had originally donated this 1972 'scoped aircheck to A. J. Lindsey for his blog...we're bringing it back.

I'd LOVE to find all this music and meld it back into the 'scoped airchecks....


(or download here)
Thanks to Russell Wells, friend of this blog! 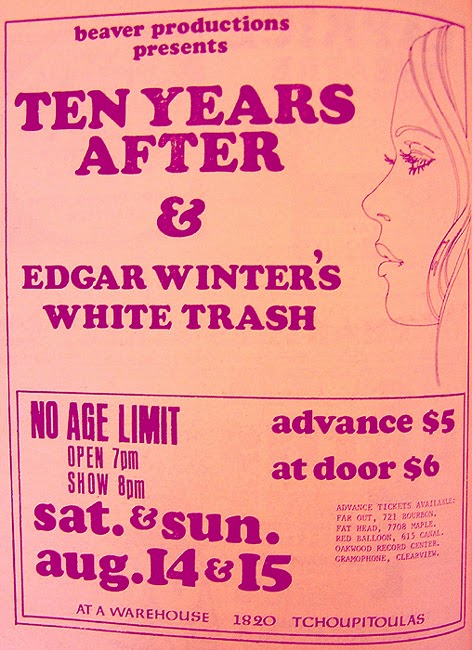 Back a few posts, (aircheck listed as August 14, 1971)  Clyde Clifford was running an ad for the above groups appearing at A Warehouse in New Orleans...the problem is, the ad was mentioned August 13th and 14th!  Nonetheless, here is a poster of the event, featuring Ten Years After and Edgar Winter's White Trash... enjoy!

Thanks to Bobby Wahl again for allowing us to bring these goodies to you!

For a plea from Kenneth Hawkins:


Kenneth HawkinsFebruary 16, 2015 at 8:46 AM
Does anyone out there have any Beaker Street shows on tape or disc they can share with me? I have a whole bunch of B.S. shows on MP3 from 1970 to the very last show of 2011. I would particularly like some of those shows from the 60s if anyone has them? Let me know what you all have. THANKS!
KENNETH: get in touch with me A.S.A.P., lets see what you have... my e-mail address is: staceys4@hotmail.com
Bud
Posted by   at 12:42 PM 2 comments:

It's Summer 1972, and here is Beaker Street on the skywave as received in Evanston, Illinois.  It brings back a lot of memories for me.

I grew up in Evanston (a northern suburb of Chicago), was an active DX-er, and I was fascinated by this powerful, exotic station from Arkansas that boomed in every night on 1090.   The signal was sometimes almost as strong as our local big city rockers, WLS and WCFL.  But Beaker Street sure didn’t sound like anything on the air on AM or FM in Chicago!  The underground rock music with the southern blues, folk and country influences, Clyde Clifford’s laidback style, the “Head” music bed under his raps – it was all such a strange, spooky, interesting mix.  I can’t count the number of nights I stayed up late to listen, keeping the volume low so as to not wake up anyone else in the house.  As a young man who was fascinated with radio and so eager to work in the business, Beaker Street and KAAY were radio magic to me.

This is a full 3-hour show I taped the night of June 1-2, 1972, 11pm-2am, telescoping the aircheck along the way (sorry, there is no untelescoped version).  The signal fades up and down, but as you’ll hear it’s pretty good skip reception most of the time.  The aircheck ends with the intro to Beaker Theater and Clyde’s dry, funny description of what was to come.

This show has been posted previously in two parts, but this is first time the entire show is posted in one single file.  Bud Stacey says this aircheck may well be the best and most representative of the original Beaker Street, and I agree.  The music is a rich mix of artists that includes:

The commercials are great, too.  It amazes me how someone could to go to A Warehouse in New Orleans and hear such tremendous music for just $4!

Listen to this show in a dark room or on a dark road at night to best capture the mood.   Thanks Clyde, for all the entertainment and music discovery you provided for us young people growing up in the Midwest.

Another Great Ad From Beaker Street

Something just occurred to me today...when I was listening to the January 1, 1972 aircheck, I thought about the ad where The Allman Brothers, Vince Vance & The Valients and REO Speedwagon played an encore concert that night, since so many people weren't able to make the concert New Year's Eve (12/31/71).  I thought of our friend Bobby Wahl and The Warehouse tribute site, wondering if there wasn't some more memorabilia there... lo and behold, there was a poster of the concert! 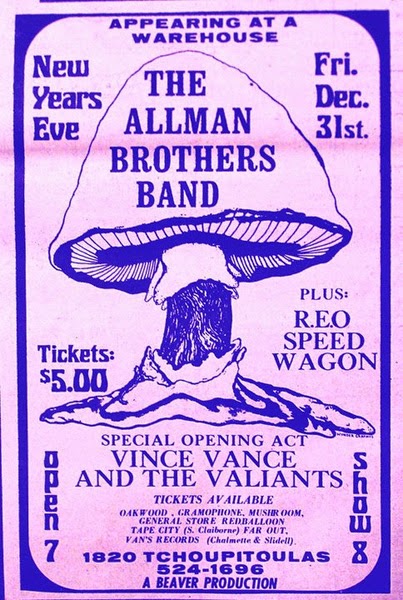 Bobby is constantly improving the site, so you MUST go there and check it out, if you haven't recently!  http://www.blackstrat.net/  Clyde Clifford ran these ads (and many more) well outside KAAY's local area, because the station's signal covered so much ground- it was like a worldwide shortwave station!  So many people flocked to The Warehouse, I believe, because of KAAY's/Clyde's airing the ads.

By gosh, here's another one: 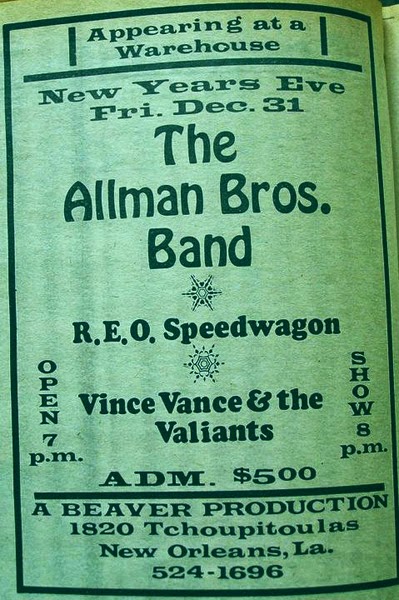 The ad for the encore concert ran many times in the early A.M. hours of Beaker Street on this particular aircheck...remember hearing them in the post a few back?

From time to time, I'll sprinkle a bit of history here and there, hopefully for your enjoyment, to augment the experience of the airchecks!

Alas, I never made it to The Warehouse; I worked all the time I wasn't in school and college.  There was little time for play.  I was able to make concerts in Mobile, AL, Pensacola, FL and Gulfport, MS, because I could drive back home in a reasonable time and not lose too much sleep.  I regret that I never made it to New Orleans.

THANKS SO MUCH to Bobby Wahl, the master of The Warehouse tribute website!  Give it a visit and leave Bobby a note telling him you saw this here and how nice his site is looking- it just keeps getting better and better!

This is a re-post of one of the few interviews that Clyde Clifford has given about KAAY and Beaker Street.

In 1995, Clyde Clifford did this phone interview with Jim Snowbarger, a self-described radio nut, electrical engineer, KAAY fan and internet radio producer/host in Marshalltown, Iowa.  Jim sent me a copy of the interview several years ago and gave his okay to pass it along to this blog.

The interview lasts about 29 minutes and Clyde talks about:  The beginnings of Beaker Street;  how the spooky background music bed came about; whether the KAAY transmitter site was haunted; the transmitter studio equipment; the last Beaker Street show on KAAY in 1985; his Beaker Street shows on FM in 1995; his day job at UALR; and why he's still unflappably happy.

Here is another Beaker Street that Dave S. was able to glean from A.J.'s blog before the players broke...after Jethro Tull's "My God", notice the more familiar "Cannabis Sativa" background music?

The Dr. Pepper commercial harkens back to better times, in my opinion.  Music was MUSIC, not the synthesized versions we've gotten used to today.  I love the nuances of multiple voices and actual instruments!


(or download here)
I am grateful to Dave S. for his rescue efforts, and to Greg for helping repost everything here!

Do you like us bringing back these memories?  Please leave us some comments!