George Jennings, Managing Editor of the KAAY News Department, again heads up this 30-minute news magazine.  Good ad about the Salvation Army after the introduction....

The first interviews were about the controversy of mixed drinks and whether or not bars could serve such.  My, it seems there was such  a to-do about what was considered a high-priority ruling by the Attorney General.

More problems existed over this issue...and many interpretations and opinions!

Here are various commercials, no bloopers, great finished products for air on KAAY!  Well, maybe a blooper or two...

-Moses Record Shop, a great place to shop in the day!

-Ray Moody's "My Father" program at 6PM, concerning a young lady almost losing her life during an abortion.

Greg B. and I are going down to The Fig Leaf to get some funky threads...thanks, Greg!

Here are various political commercials for Wilbur Mills.  This tape sounds like it had survived quite well.

Can someone name those deejays in the commercials?  I think the Mighty Wayne Moss was in one of them.

One of the most fond memories I had growing up was listening to Casey Kasem's "American Top 40".  It was a syndicated show, aired every Saturday, and some Sundays, over radio stations worldwide.  Yes, NOT just stateside...Casey's show played on Armed Forces Radio and TV Services and variations thereof, for the troops overseas.  Back then, we didn't have the satellite links as we do today- the only way the show was heard was when the tapes were shipped to the particular radio stations in the theater of operations, or aired by shortwave on the Armed Forces Radio networks. 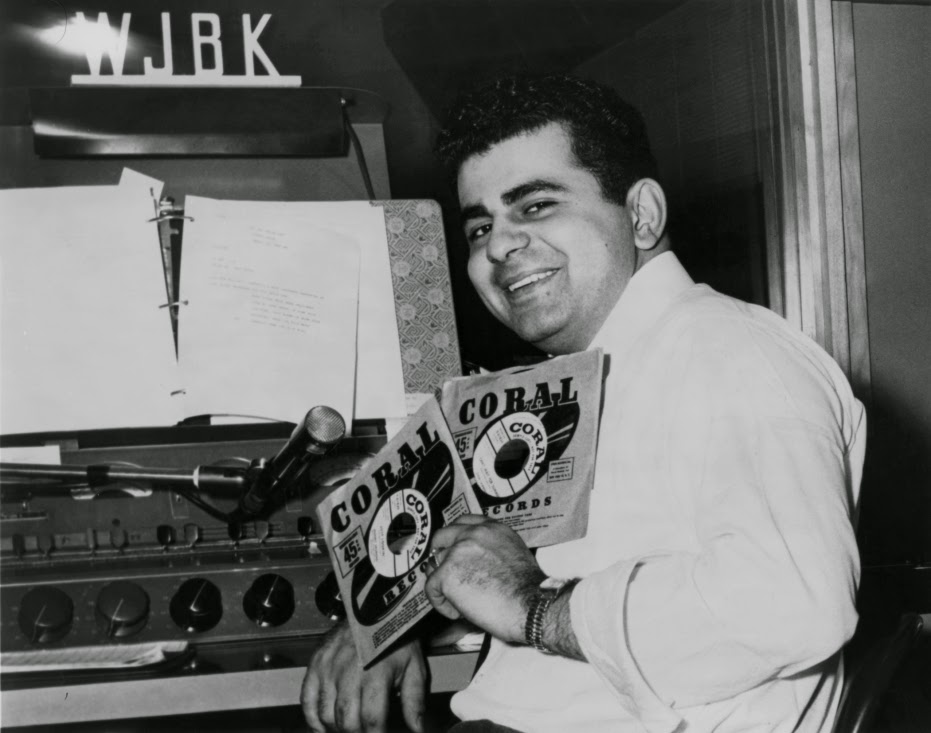 During my troubled youth, American Top 40, and Casey's smooth delivery thereof, was of comfort to me...as well as music in general and my dedication to KAAY, et. al.  I always searched for the unusual and I guess listening to this show both via regular stateside AM radio AND by shortwave on AFRTS sated my cravings.  Funny, how I could listen to this, and other shows, on my grandfather's old 1953 Zenith Transoceanic (of which I possess today!).

And, as a dedication to Casey Kasem, I've gotten permission from my friend Thom Whetston, of the AFRTS Archive blog, to post the American Top 40 Roundup for 1977...the year I graduated from high school.  Boy, these songs bring back some bittersweet memories:


There had been a rumor that this show was aired on KAAY, either before or after Beaker Street- but I don't get a response from the person who said it, nor can I find anyone who can confirm this.  As per David. B. Treadway. KAAY did not air syndicated material...

Casey Kasem went on to what some of us call "radio heaven" on June 5, 2014- but we can all remember what he said at the end of each and every show:

"Keep your feet on the ground and keep reaching for the stars!"

Thanks to Thom Whetston for this material, and the permission to post thereof.

Thank you, Casey, for soothing this savage beast...see you later....

...until more is unearthed!  Maybe "Tony Marlar" will let us have more audio via YouTube!?!?  Thank you, "Tony"!

This is Ray's return to Little Rock radio on KLAZ(FM) in April 1983, after a two year hiatus from KAAY/KLPQ.

Once again, thanks to Greg Barman for his great help in archiving and linking to these audio gems!

(Edited for accuracy...I had the wrong war bs)

Today is a sad day for me- but, in away, I am joyous.  Just after dawn's early light, we lost a friend, a warrior and a brother, Clifford Shirah at age 86 years young.   Cliff the warrior served in the Armed Forces in Korea (25th Infantry Division, U. S. Army, wounded in battle)...Cliff, my friend and brother, showed many what love and sharing was all about ...

I am sad that Cliff is gone- but I am joyous that Cliff ran his race and ran it well, now receiving his reward in heaven.  I know I'll see Cliff again, as certain as I can be....

Cliff has nothing to do with KAAY- but he has eveything to do with fighting for this country's freedom.   Cliff had no problem telling anyone he loved them and that he prayed for them, this gentle warrior- and I am growing bolder, as Cliff has led by example.  I have realized that I have come to the point in life where I have more yesterdays that I do tomorrows-  and, as some of you have personally witnessed, I do not hide my encouragment or good feelings for your well-being.  With that said, do not hesitate thanking those who secured your freedom- any day, anywhere, anytime.

Thank you, Cliff, for being all these to me, and others around you.  I'll see you again one day...rest well,  gentle warrior....

The Last Of The "Steve Scott" Pics- And One Of My Own!

I believe this is the last shot I have of Steve at the concert...this one, another night shot...I'll bet he was really having fun...I wonder how his boss Wayne Moss thought of Steve's performance?  Maybe it got him a raise!

Again, look at that grin!  You know, it looks like people at that concert were pretty well behaved...at the stage's edge, but not crushing or belligerent.  Steve must've done a good job of keeping them in line!

OK, fast forward to "today"...I'd posted a picture of Steve a good while back, the first time I met him.  This is one I took at one of my Amateur Radio swapfests ("The Satsuma 'Tail-Gator'").  With him is his best friend "Toby" whom he rescued from the streets.  Looks like the little feller is well-taken care of! 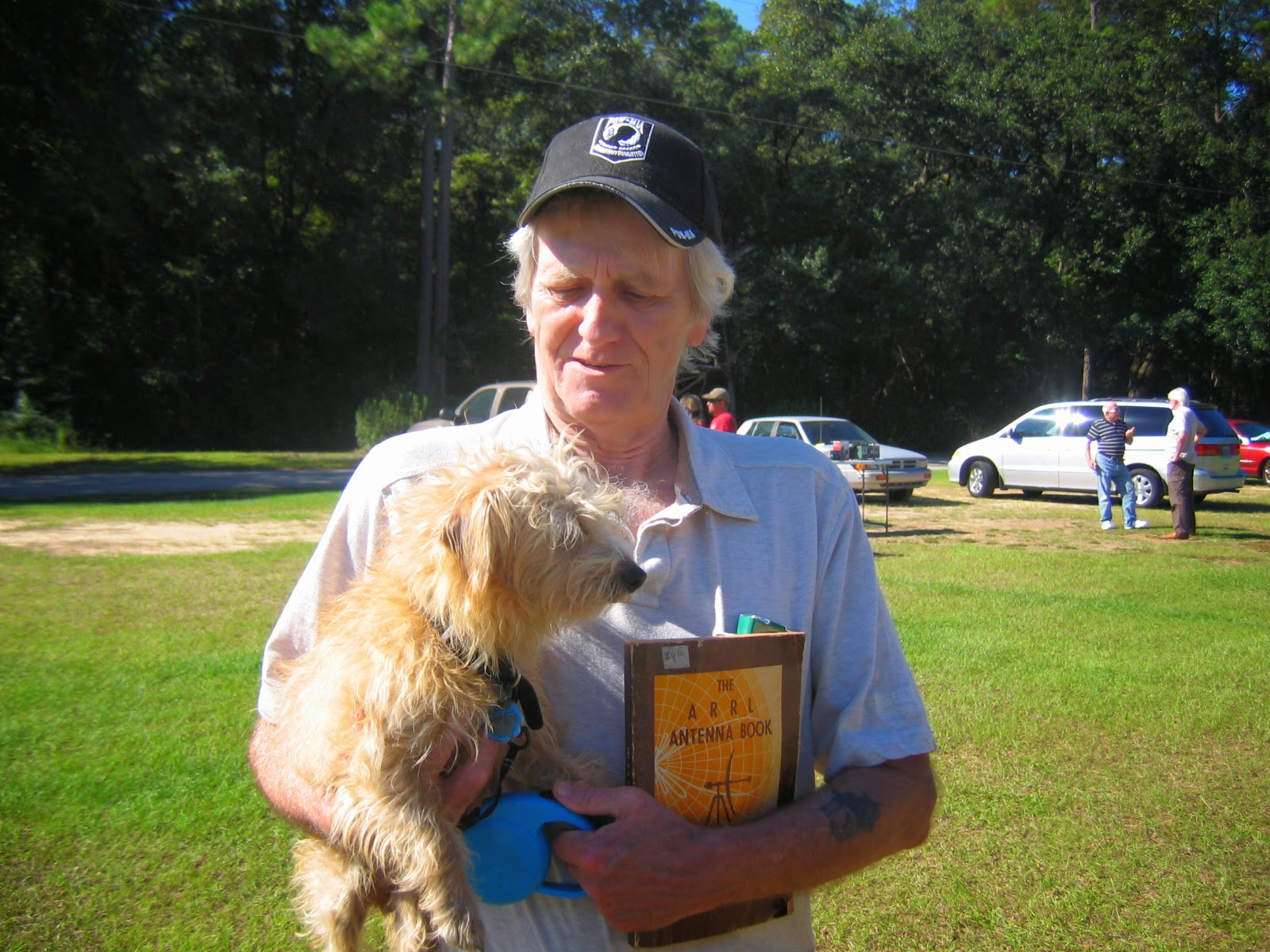 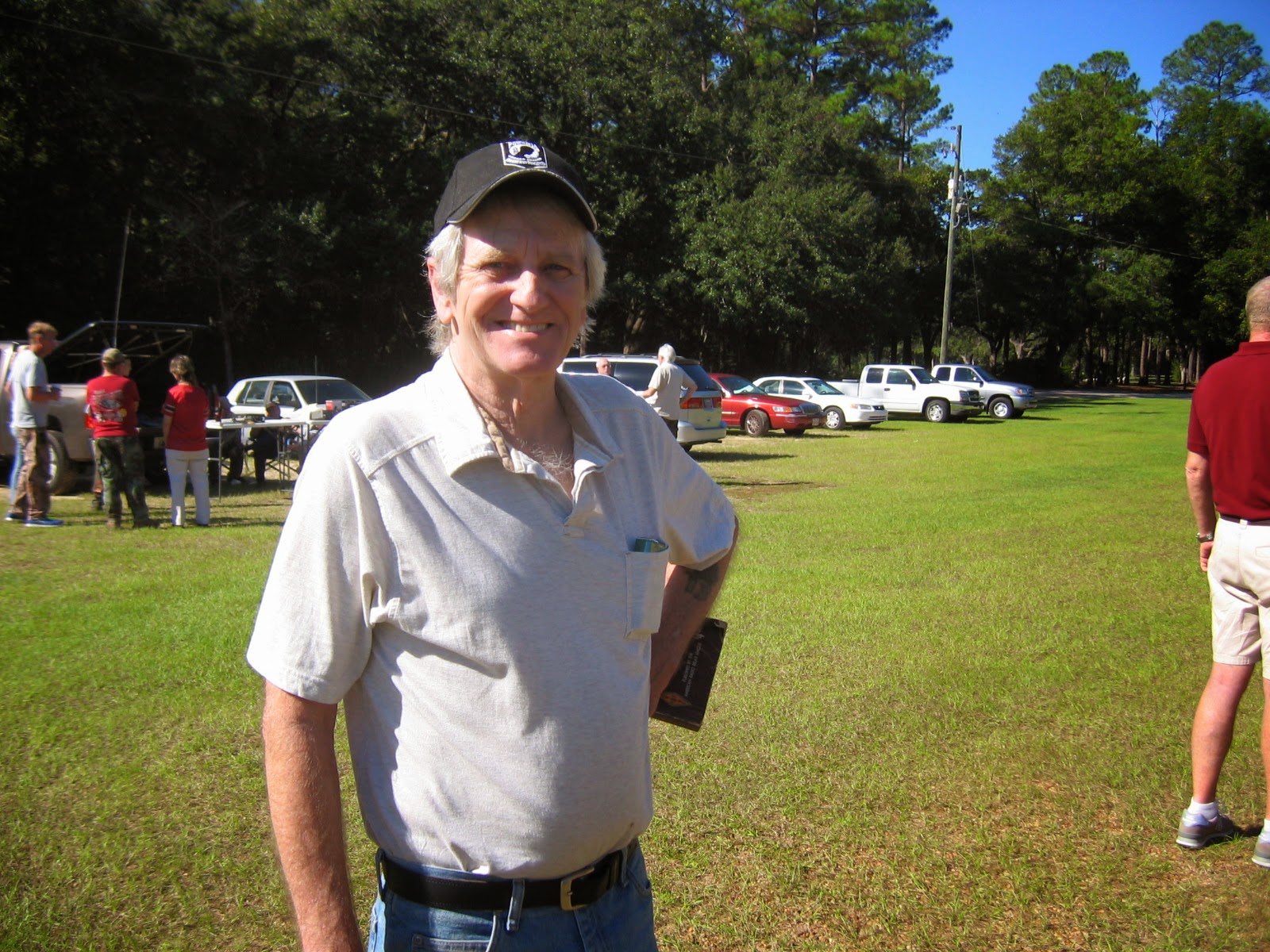 As you can see, it was late in the day and most of the "Tail-Gator" participants had left, but a good time was had by all.  The best time of MY day was when Steve showed up with these pictures and allowed me to snap the last two!  The book you see him holding is on a subject I love- antennas!  The ARRL (Amateur Radio Relay League) Antenna Book is a staple of "Hams" everywhere... the best improvement one can do to ANY station is in the antenna system.  That's precisely why KAAY's signal was so powerful- and flung Steve's and others' voices halfway 'round the world!

Thanks to Steve Morris, "Steve Scott", for sharing his pictures from early in his career with KAAY!  Please let him know you enjoyed them by leaving a comment or two on these posts!