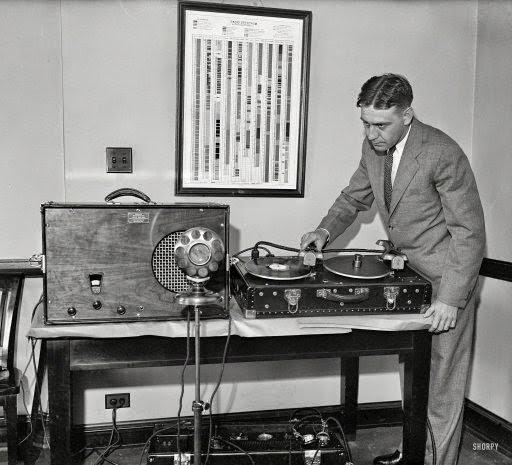 Washington, D.C., 1931. "Man with portable radio receiver and phonograph." Who seems to be using the amplifier to play a record into a microphone. Note handy "Radio Spectrum" chart. Harris & Ewing glass negative.

Music from The Tower Building Part 2

As Dave T. has observed, KAAY used equalized phone lines from the 7th
Street studios to Wrightsville. It takes a lot of careful telephone
company engineering to make a low-fidelity telephone line carry a
broadcast-quality audio signal. Although I don't know for sure, I
suspect that the original KAAY telephone company program lines were
step-equalized between the 7th Street studios and the Franklin
exchange office, then equalized from the Franklin office to the office
serving Wrightsville (I forget the name of the exchange), and then
equalized from that office to the Wrightsville transmitter. Careful
telephone company engineering and sturdy Western Electric equipment
gave KAAY a very nice audio signal.

Over the years, much of this telephone company engineering expertise
has been lost. The telephone company has found ways to stack many
different telephone calls on a single pair of wires, meaning that a
dedicated broadcast audio circuit on a dedicated pair of wires was
wasteful and expensive. The telephone company responded by breaking
the broadcast audio signal into separate pieces, sometimes routing
these pieces over different paths, and reassembling them at the end.
This produces some weird audio effects. Even worse, we could hear
Tower Building elevator noise on both KAAY and KLPQ, something that
should not happen on a properly balanced circuit.

Although the STL transmitters at the Tower Building (one for KAAY to
Wrightsville and two for KLPQ to Shinall Mountain) worked OK, it was
very difficult to operate 3 STL receivers and three STL transmitters
in the same band in close proximity to each other. To make matters
worse. my predecessor had installed all of this equipment in the same
rack and had installed braided coaxial cable to the receivers that
leaked like a sieve. After replacing these coaxial cables and
constructing a shielded room in the former KMMK studio room to house
the STL receivers and grounding everything to the steel frame of The
Tower Building, I finally got the system to work reasonably well.
However, The Tower Building was the common point for all audio and
transmitter control signals for both KAAY and KLPQ and was a constant
source of trouble. I recall one afternoon when Tom Rusk inadvertently
unplugged an extension cord and put both stations off the air during
afternoon drive time.

As best I can tell, The Tower Building site is no longer in use. The
FCC files for KKPT do not list an auxiliary transmitter at The Tower
Building. The KKPT STL system now reaches Shinall Mountain through a
relay at the former KLRA transmitter site at Galloway, east of North
Little Rock, and KAAY now uses an STL from its West Little Rock
studios to Wrightsville. It appears that the original KMMK studio and
transmitter site have now been lost to history.

(Sorry, I forgot to add the picture of the Tower Building Hollis sent me...here it is...Bud) 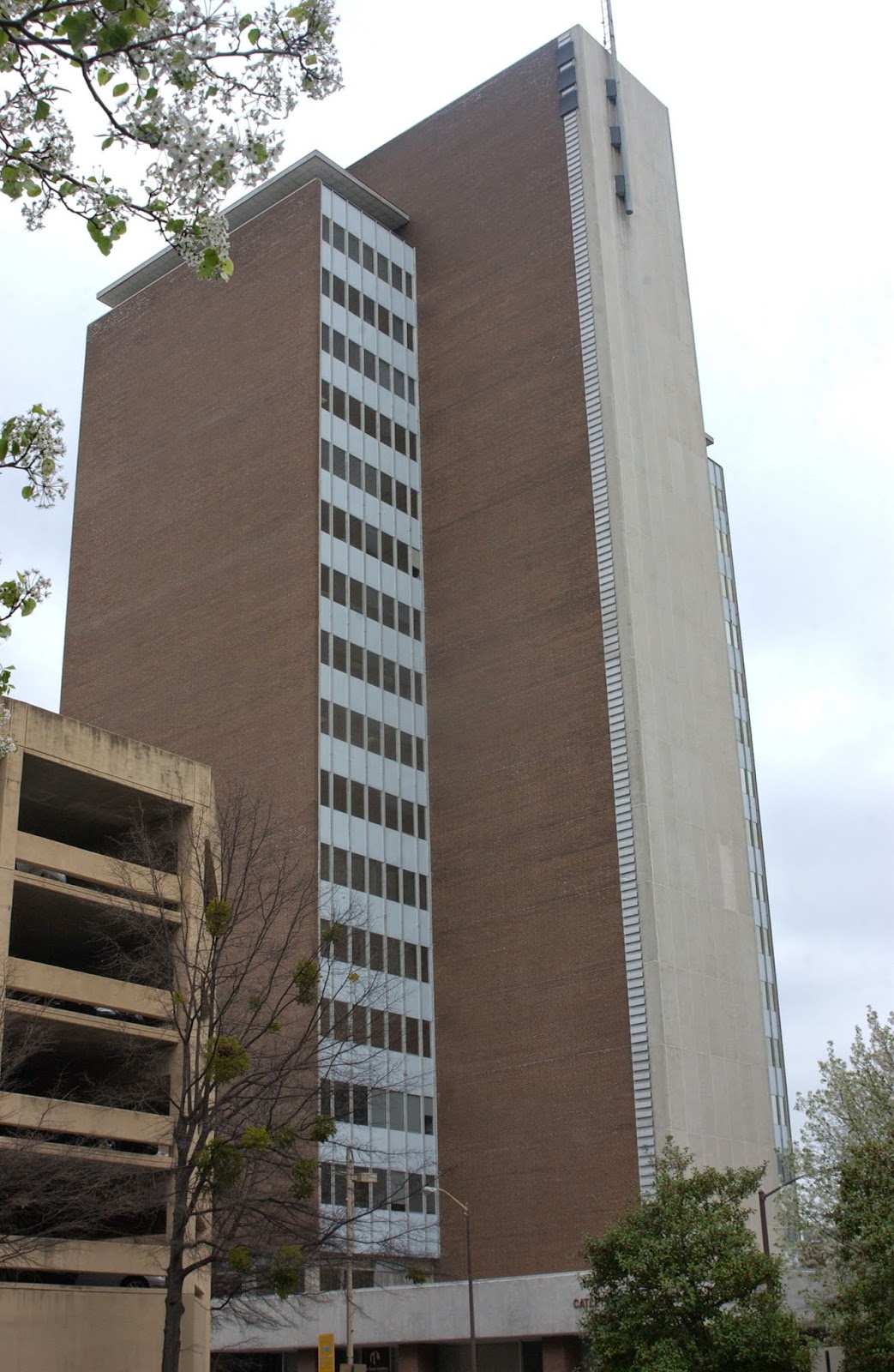 Music From The Tower Building Part 1

KMMK began broadcasting on October 26, 1961, from The Tower Building
at 4th & Center Streets, which was then the tallest building in
Arkansas. The Tower Building was built by future Governor Winthrop
Rockefeller, who maintained offices on the 18th floor until he was
elected Governor in 1966. KMMK was located on the 17th floor and its
antenna was mounted on a mast on the south side of the building.

KMMK was founded by Oscar Alagood, a former KTHS sales manager who
later became a newscaster for KATV-7. KMMK advertised that it played
uninterrupted 33 1/3 LP albums. KMMK was monaural at first and
converted to stereo a few years later. At the top of the hour, the
station ID was "KMMK FM, Dial 94.1 in Little Rock." The half-hour ID
was "KMMK FM. Music from The Tower Building in Little Rock." KMMK
didn't run many commercials and its primary purpose was to carry Mr.
Alagood's MUZAK franchise on the SCA subchannel.

Before long, The Tower Building was no longer the tallest building in
downtown Little Rock, which severely limited KMMK's coverage in
several directions. In 1969, Mr. Alagood sold KMMK to Mr. J.C.
Stallings, owner of a successful AM-FM combo in Nacodoches, Texas, who
changed the call letters to KRAA (as in KRAAdio). Mr. Alagood soon
moved MUZAK to KARK-FM (later KKYK). In 1973, Bernie Mann, owner of
KALO-1250, bought KRAA, changed the call letters to KEZQ, and
installed a transmitter at Shinall Mountain, while keeping The Tower
Building transmitter as a backup. Both of these facilities were
inherited by KAAY when it bought KEZQ in 1976.

The Worthen Bank Building was a block south of The Tower Building and
a law firm on its upper floors wase directly in the aperture of the
KMMK antenna. When the KMMK site was in use, the law firms
dictaphones wouldn't work. The law firm complained to the FCC and was
told that they didn't have a case because KMMK was there first.
Because Tom Rusk was available to me on Wednesday afternoons, we often
used the auxiliary transmitter on those afternoons and thereby played
havoc at the law firm. I specifically deny doing this on purpose.

In Part 2, I will tell some of the story about the KAAY/KLPQ relay
from The Tower Building.

Again, Greg Barman links us to some important historical news...Frank Woods presides again, with an inspiring Marines commercial, then into an interview with Chief Frank Davis, for National Fire Prevention Week.  There's even a mention of a "modern day Bonnie and Clyde" duo!

How 'Bout Some Commercials?

I remember those tire sizes on the Pfeifer-Blass commercial...then "they" had to go make everything metric...I wish we were back on the American Standard of measurement!

Once again, Greg Barman links us to the historical past with Frank Woods and Focus On The Newsmakers!  In this segment, Jonnie King conducts an interview...you'll enjoy this one!  There is more excellent reporting, so sit by with your favorite cool beverage and hear what it was like on this weekly segment of Focus On The Newsmakers....

Focus On The Newsmakers, With Frank Woods

Before I get started on this one, I want to thank Greg Barman for his audio wizardry and enablement to bring these historical news gems to the blog....

This Focus On The Newsmaker segment was labelled 01/25/1970 and opens with Newsman Frank Woods.  There is a unique opening, with a flashback to 1962, back to the 70's, declaring they are "enter(ing) the new era...dominating the new decade" with ComEx News.

There is a lively interview with then-Governor Rockefeller on bussing and other issues; later in the news segment, Bill Edwards is found reporting.

With those tasty teasers, listen on and enjoy history, as it was!


We have quite a few more, so don't touch that dial!

Bob Steel And Others Fired From KARN

Former KAAY personality Bob Steel, along with Dave Elswick and Jack Heinritz, were all fired Thursday, April 3, 2014 from KARN FM/AM....

Bob says he's not bitter about it, as he owns a small public relations firm....

Read about it here:

I missed interviewing Bob by minutes, when I was in Little Rock two years ago this month...Jerry Sims and I missed him, as he had left the studios a few minutes before we arrived....here's Jerry, "Sonny Martin II", in front of the studios when we were there: 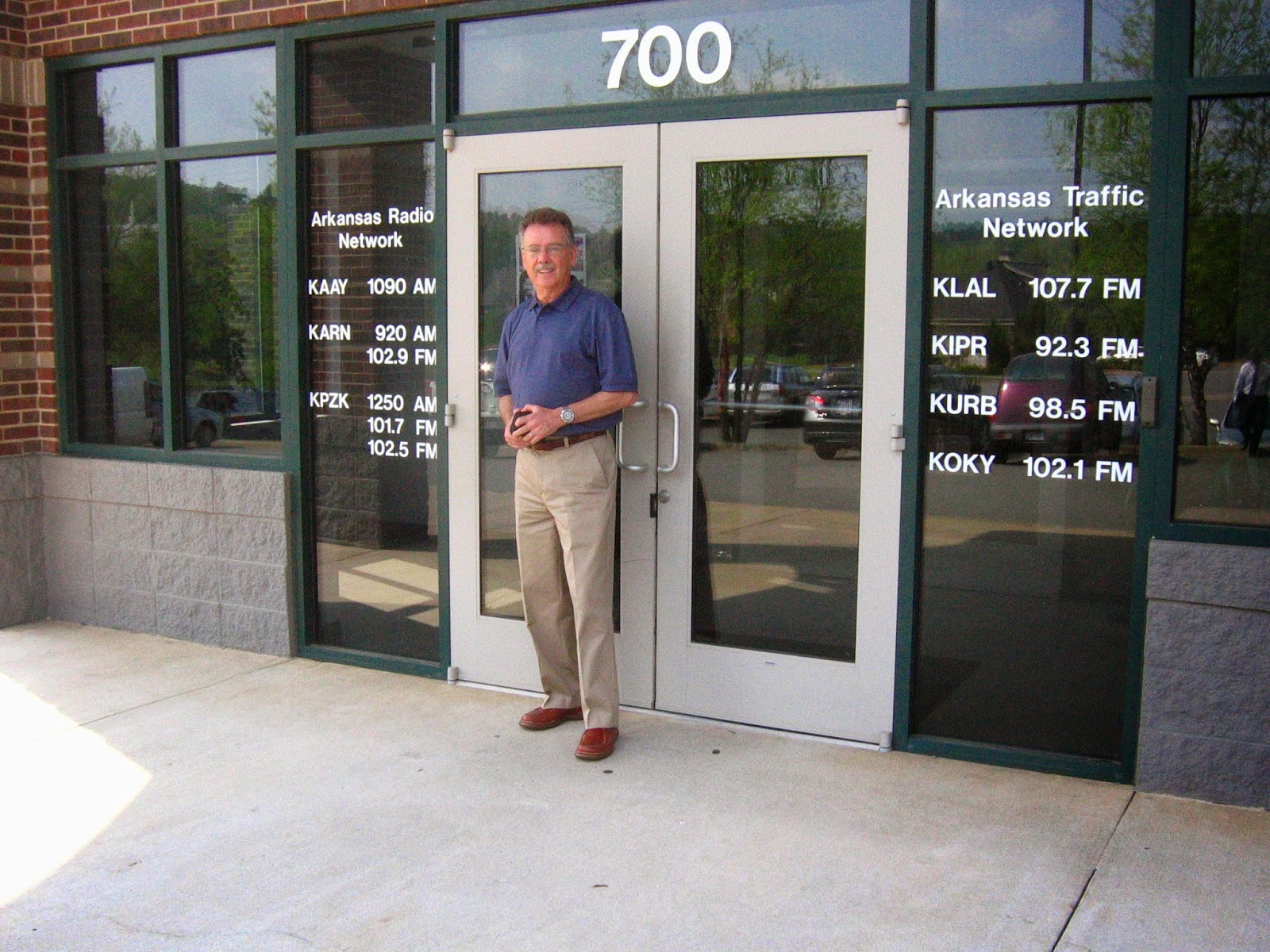 Dave Montgomery and Hollis Duncan both have great memories of Bob...Dave worked with him at the 7th Street Studio and mentioned that he is a "true broadcast professional and a first-class gentleman".

Maybe we can corner him soon, for some favorable comments about KAAY...?  If anyone has any personal contact information on Bob, please contact me ASAP at my e-mail address below:

I remember David B. Treadway in the latter days of (rock and roll) KAAY; as of late, mentioned last year, he's been playing the newer Country and Western on "US 97", KQUS, with Vicki Parker, on the morning shift, Monday through Friday.  Lately, he's been doubling over on KWUS' classic rock sister station, "The Rocket" on 101.9, KLXQ, from 2 PM Central Time, until....

(In fact, the whole staff you hear on KQUS doubles over on the various U S Stations affilliates during the day...it's called "saving money", using existing staff for live commentary during the broadcast day.)

Needless to say, it's great to hear David B.'s thunderous voice over rock and roll again!  Here is the link for those of you who cannot hear them directly in Hot Springs, AR:

"John W Frank When I think of KAAY, one program comes to mind...Beaker Street with Clyde Clifford. Clyde once told me the reason he likes to keep someone on the phone as long as possible was because of the location. You know he was broadcasting from the tower in Redfield, waaayyy out in the boonies at the time, and if someone was on the phone, he had a 2-way contact with the world. The Mighty 1090 was one of the few radio stations that broadcast 24/7, so smaller stations would leave their towers and that would 'bounce' the signal. If the weather was right, that would result in Clyde getting calls from all over the country. I was stationed in San Francisco in late '73, and I picked up the show a few times, when the weather was right. It was a real treat to hear to hear that 'on air' care package from home."

Thanks, John!  This is one of the rare times someone from the West Coast has mentioned hearing KAAY, especially with the two powerhouses on that end of the continent, KING and XERB (?).

...KAAY "went to be with God", as Clyde Clifford said.  Then was "The Last Day", some say "The Day The Music Died".  Yes, many of you have read here the mention of The Last Day with Barry McCorkindale and David B. Treadway and all our discussions about the demise of KAAY.

There were many reasons: FM coming on strong, bad management, etc.  For what it's worth, go to the search window in the upper left-hand corner and type in "The Last Day" and read all the commentary, stories, newspaper clippings, etc.

But, in spite of it all, we're keeping the great memories of KAAY, 1962 through 1985, right here on the Mighty 1090 KAAY blog!  Please visit often, leave comments and e-mail me with YOUR personal stories and memories and we'll post them here!

I remember when KAAY was new in '61-62. I was in high school. I also remember at 8 or 9PM, the music died and was replaced by Garner Ted Armstrong and Herbert W. Armstrong and their preaching from the World Wide Church of God. There was also a program from Stan's Record Revue that played for a bit in the evening. In the early morning hours (4am or so) there was a program featuring Polkas and another about Manna. Why can't I forget some of this stuff?