OK, did you have to take a break?  Are your sides sore yet?  Wiping tears of laughter away?  Side 3 is about to begin!

A. J. Lindsey commented that people other than on-air staff got involved with "Ear On Arkansas"; I'd done a short search, but didn't come up with any off-air names (they may be hidden elsewhere on his blog, or in the memories of others.

We have one more inner flap picture for you: the table of contents!  It also lists the KAAY staff at the time of the album's creation.  Some you may be familiar with, others not...but they were ALL important in running this top-notch station! 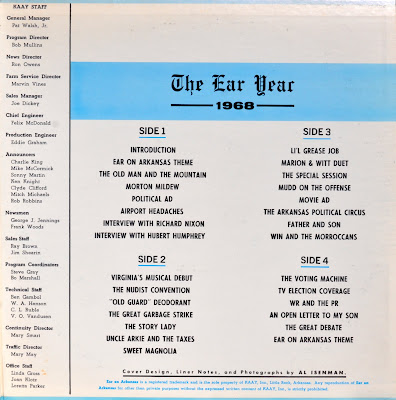 So, gather your breath- take a couple of deep ones- hold your ribs and let your imagination run with Side 3...roll it, Greg!:

(or download here)
Thanks again to Greg Barman for getting these tracks down for everyone to enjoy!  Don't touch that dial, Side 4 up next!

Barry Mac's Flashback Tracks is Now "On the Air"!

Our Blog's own Barry Mac, creator of "Tin Can Alley," has started a new weekly show, "Flashback Tracks"!  Here's what Barry had to say about it:

[It's] another weekly show that's more along the lines of Beaker Street, ...  currently airing on an Internet stream provided by Cumulus assistant engineer Daniel Appeloff, under the call letters of KDNQ.  ...  It will only occasionally feature some of the audio from the KAAY transmitter tapes, but I thought you might be interested anyway.

Well, we definitely are interested! The first edition of Flashback Tracks is right here:

(or download here)
You will also find Flashback Tracks posted every week in the right column of the Blog, next to Tin Can Alley.

Thanks, Barry, for all the entertainment!

Appetite whetted yet?  As mentioned before, "Ear On Arkansas" was a weekly feature; it had been on the air Sundays at 11:30 and 5:30 (I suppose AM and PM, respectively), as mentioned in the album.  I'd never been able to hear it directly, that I remember, as the skywave only started to come in at dusk into Mobile, AL.

Not only did they poke fun at political figures, but other things as well.  However, both sides of the political aisle have accused "Ear On Arkansas" of being downright communistic or far-right wacko- of course, coming from opposing camps.  Nonetheless, the players of "Ear On Arkansas" were equal-opportunity offenders!

To be sure, KAAY and its staff got the idea from CBS' Arkansas affiliates "Eye On Arkansas", which was somewhat of an expose` program.  "Ear On Arkansas" surely chafed quite a few rear ends, while providing howling entertainment for its listeners.  Here's one more picture, this time of the inner flap, outlining some of the escapades and history of "Ear On Arkansas": 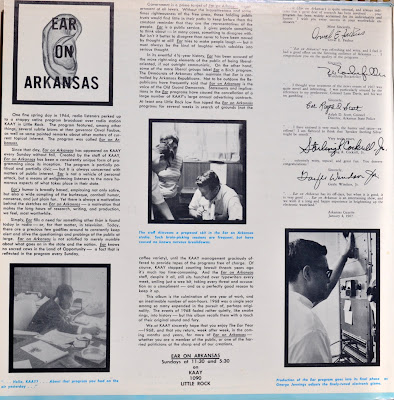 Once again, thanks to the audio efforts of Greg Barman, here is Side 2 of "Ear On Arkansas":

Many of you remember "Ear On Arkansas"...still others remember the "Ear On Arkansas" red album from 1967.  I have one that was given to me by one of The Greats, "Charlie King" (Charlie Scarbrough), that still has the plastic wrapper, albeit opened, and Jerry Sims' family has another  A. J. Lindsey's family has the only other one I know of.  I'm sure more exist.  For those who don't remember, here's are pictures of the red album from 1967: 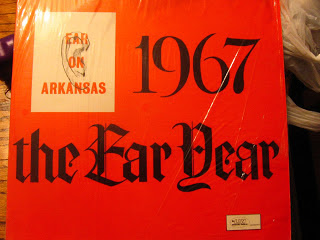 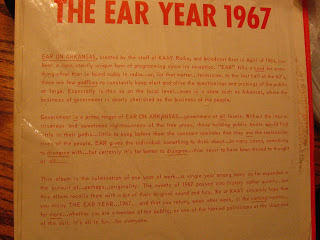 It was said that this weekly feature, since 1964, was some of the funniest satire, often poking fun at Arkansas political figures.  It was also mentioned by some of the greats that, when the comedy team got stumped, they often called Howard Watson (a "Ken Knight"), who was able to whip something up in as little as 15 minutes.

Tony Meyer, friend of the blog, sent me a rare treat awhile back- sadly, I'd put it on the back burner while other material had been coming in and my own life got in the way.  (I've been working two jobs for three years and have only had time for a little rest or leisure time.  But that's no excuse!)  At long last, we bring you the 1968 "Ear On Arkansas" "blue DOUBLE album"! 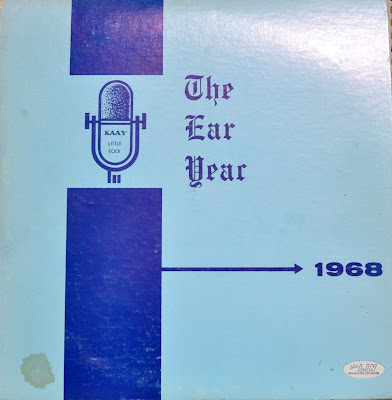 Thanks to Greg Barman and his audio prowess, here is Side 1!

After a long, valiant battle with Cancer, my dear friend, St. Louis' Gayle McCormick, one of the most iconic female singers to define the era of the 60's, passed away in St. Louis, on March 1, 2016.  With "A Group Called Smith", Gayle set the music world on its ear in August of 1969 with the release of their version of the Classic hit "Baby It's You".  She was 67.

In the last few years, Gayle was amazed & overwhelmed at resurgence of her popularity, and the new fans she had gathered through the advent of her being featured, not only on the Internationally-known Tribute Page that I set-up for her  but, the great number of You Tube presentations featuring her with Smith, her solo career, and, with the great local-connection recordings with Steve Cummings & The Klassmen...ALL now available to be read about, seen, and, heard World Wide through the Internet. PLUS, those who remember her from the early years, have also reunited with her music, her beauty, and, the one-of-a-kind voice that they never forgot.

Her talent is known in all 50 States, and the more-than 138 Countries that come to my Site alone. And, her talent, her spirit, and, the remarkable voice she possessed will live on forever throughout the Universe...wherever music is heard.

SPECIAL NOTE: IF YOU HAVE NOT READ the Tribute to Gayle  please take the time to do so.  Within its words, images, and, photos, you will learn the history of this truly remarkable singer-entertainer...and why she has always had an impact on the World of Music from the very first time she ever stepped onto a stage...to the minute you're reading these words right now.
http://www.jonnieking.net/gpage28.html
(Dear reader and visitor, friends of the blog, I apologize for not getting this posted sooner; life continues to get in my way.  I also apologize to Jonnie King for not getting this posted in a timely manner.)

Also, a mention of Gayle from Karen Adams, friend of Jonnie:


"Thanks.  What a beautiful tribute to Gayle.  When I saw the photo of her standing in the walkway to The Bat Cave I knew exactly where it was taken!  What wonderful memories...Johnny Rabbit and the Bat Cave.  I remember Johnny Rabbit at my house many times and Gayle's beautiful voice.


Thank you for letting me know that Gayle passed away.....way too young.
Karen"
https://www.youtube.com/watch?v=-NCg6H5DOLc
Bud S. (staceys4@hotmail.com)
Posted by   at 3:00 AM 3 comments:

I NEVER knew this existed until a couple of months ago !  Kim Simpson chronicled our Early 70's Radio histories in a book that was published, he was aware of our KSLQ and added this page to his Blog...a copy of the book is supposed to be on the way to me soon. Thought you might enjoy this...

Here's the Link to the Page he added on the Net:  http://www.early70sradio.com/2014/09/listen-to-jonnie-king-on-kslq.html

Thanks for sharing, Jonnie!