Here is more retro-fun from Barry Mac's Radio Yesterday service.  This one aired on KAAY during the weekend of June 19, 2005.

On this show -- Eddie plays some blues, a visit with the Candyman, what the Byrds want to do, checking out the coal mine, a sermon from the Staples, the one-hit wonder of the week, and a movie ad flashback: 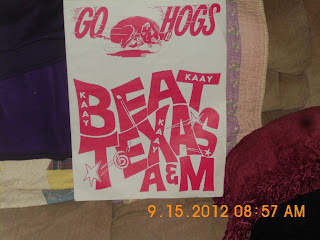 "KAAY used to give out posters each week during the Razorback football season.  Of course this was done before all the patents and trademarks took place.  For the Arkansas Razorbacks this was done about 25 years ago.  This has happened with most college and professional teams over the years.  For example with the Razorbacks the logo or name can't be used without written permission from the University of Arkansas.  Now IMG Media owns the rights a majority of Division I college teams.  It includes merchandise and games broadcast over the airwaves.  Its similar to what Iheart and Cumulus is to radio."

Thank you, Doug!  I'll have to dig out my posters and re-post them, as well, for football season!

Any others out there?  Please contact me at my e-mail address below!

After listening to A.J. Lindsey and others regarding KAAY's appearance in 1962, he said they were scared stiff at how KAAY sounded, with the new "hip" music and slick deejays.  Here was his comments about a giveaway KAAY started in 1962:

"Continuing the contests memories. KAAY signed on September (Labor Day weekend as I remember.) 1962. I was Program Director at KXLR. With KAAY, a total of four stations in the market were top 40. We had heard on the street, that KAAY was going to give away a car. So, we got our crack sales department to go out and trade out a car to give away. KAAY's contest was to give away a car a day for a month and ended the promotion with a car an hour for 24 hours. Mike McCormick (PD at the time) always thought big even for 1962. The run of the mill contests, the news tip, etc. were usually small dollars."

Thanks again to A.J. and the Lindsey family for allowing us to carry on his work here.

The Mighty Jonnie King, after spending about 3-1/2 years in Little Rock, got "the call" about this time in September 1972 to go to WDRQ in Detroit Michigan, at that time, the 5th largest market in the country.  What was Little Rock's loss was Detroit's gain.

For old time's sake, let's go back and listen to Jonnie in the summer of 1972:

Thanks to Jonnie for ALL the great memories!  Here is the link to his great website:

Thank you Jonnie!  You are a wonderful friend!

Going Retro: What Else Happened In September?

KAAY, that's what!!!  Back on Labor Day, 1962!!!!  A. J. Lindsey entered this post on his blog, which included the link, "Take Me Back To The Sixties"...pay heed to what many of us experienced- I certainly wish we could go back to simpler times:

Boy, how we as a country and a people have degraded and decayed....

As this day dawned, I remembered the awful events that happened today, fourteen years ago.  We were at work and someone ran down the stairs from our break room at work to tell us of the planes hitting the Twin Towers...then the Pentagon...then the crash in Pennsylvania.  We didn't get much work done that day.  I went back to A.J. Lindsey's blog and found Paul Harner's comments, a portion of which are reproduced here:

"As far as September 11 goes, I haven't forgotten. I don't think anyone alive and awake would ever forget that, regardless of their political stripes. I also despise that damn "Have You Forgotten" record that was released afterword. I was doing data entry work at Harrah's Casino that week. It was my last week of working there. I was stuck in traffic that morning, for no real reason. I called the Missouri Department of Transportation (MODOT), just to find out why the road was unnecessarily jammed. There wasn't any real reason for it. The woman said "it could be worse, I just heard that two planes flew into the World Trade Center." I thought she was joking. Nope. As I made the rounds, all the monitors switched to CNN, showing what happened. Twenty minutes later, the Pentagon was hit, and I watched that. From that point on, there wasn't a whole lot of work to get done. Three hours later, a large number of people show up. Passengers from flights to Las Vegas diverted to Lambert Airport as all the planes were grounded. These passengers had no place to stay and were looking for hotel rooms.

As the afternoon progressed, there was talk about price gouging and long lines at area gas stations. When I left work, I sat in a long line, but thankfully the price at the station was unchanged.

There were hardly any patrons at the casino that week. That Friday, my town hosted their annual Italian Fest. It was my last day of working at Harrah's, and I decided to take a long and more scenic drive home. There are marinas along the Mississippi river, and there are several scenic routes that take you to them, exiting from Missouri 94 from St. Charles to West Alton, MO. After the drive, I went to the Italian Fest. It was probably the first time anyone went out and did anything besides watch television that week.

What makes me sad about events like September 11 is the realization that our country will spend decades of lives, resources and treasure into a war that will not end. I had hoped that the Cold War's end would have opened up new opportunities to do something different with said lives, resources and treasure. Now I don't think that's likely. I also don't care for the marketing of fear these days, and the concept of "The New Normal." Bulls**t. The Germans and Japanese occupied land and were truly a threat to the world, as were the Soviets later. The people responsible for September 11 aren't remotely as smart or brilliant as that, and probably could be disrupted and de-fanged if the will was there, and in a much shorter time than decades.

It seems to me that MANY have forgotten those tragic events...and that people are so willing to look the other way at how terrorism has progressed.  WE HAVE BECOME COMPLACENT AGAIN, as if it won't happen again.  Well, don't bet your last pair of boots, it very well COULD, and possibly sooner rather than later....

Sorry for the non-KAAY/radio post, but I thought it was appropriate...thanks to Paul Harner for his comments to A.J. back on 10/4/07.  You can see the entire post here:

David B. Treadway or Dave Montgomery mentioned how Felix McDonald kept the field outside the transmitter in Wrightsville manicured and clean...and these pictures show it: 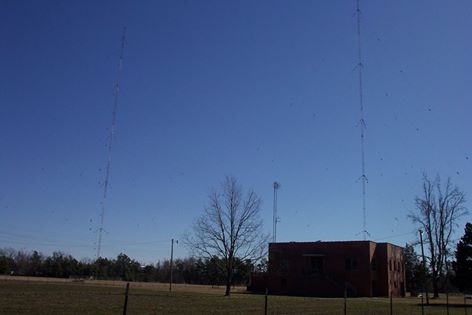 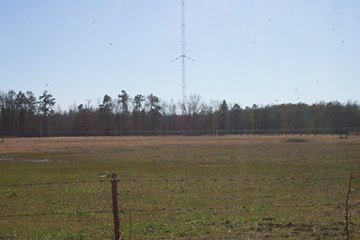 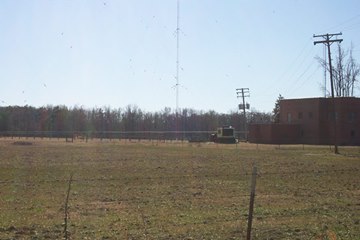 ...unlike the horrible, unkempt condition David B. Treadway, Jerry Sims and I experienced a few years ago: 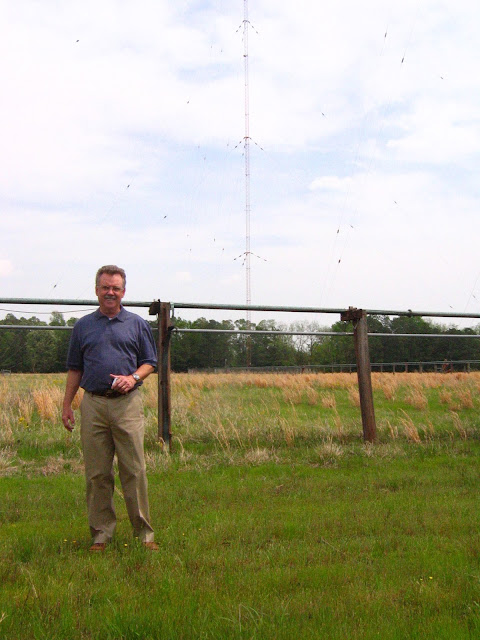 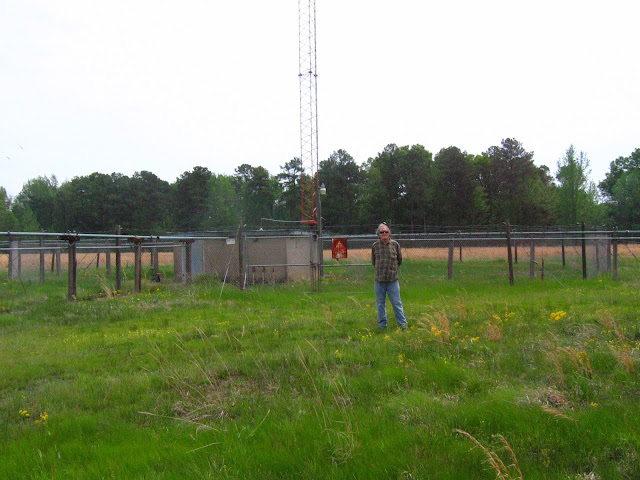 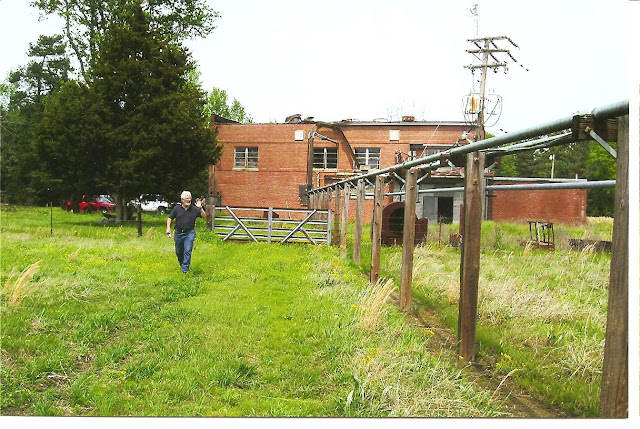 And these weren't the worst areas....

There's more to come!  Thanks to Lance Sanders for the "neat" photos!

Thanks to Doug Virden, who posted this on the Mighty 1090- KAAY Facebook page, another great piece of history!  In his words:
Look at this superstar in the makin'. That's our very own Bob Robbins (circa: early 1970s) hosting a radio show on The Mighty 1090, (or the Friendly Giant) KAAY.
Thanks, Doug!  Bud S. (staceys4@hotmail.com)