WHILE I WAS On-The-Air on JUKE BOX 96 Radio in St. Louis on New Year's Eve, 1993, I received a surprise phone call from my old friend the Legendary WOLFMAN JACK !

I had no idea that The Wolfman was going to do this...it took me completely by surprise.  I can't really tell you how grateful I was for his kind gesture, and if I sound excited on this recording it's because I truly was !

This piece of Audio History had been locked-up in my Audio Archives for all these years, but I wanted to share it with all of you so that you could once again hear his voice, and so that I could fittingly pay Tribute to this wonderful, truly professional, R&R Radio Icon:  My Friend, WOLFMAN JACK.

ALSO, I've added some of my personal thoughts & remembrances of this Radio Legend & Hall Of Famer on this same Page.  PLUS, if you listen closely, you can "CLAP FOR THE WOLFMAN" with the Guess Who !!

This is an after-Xmas treat from Pat O'Brien of KQUS-FM/US97 in Hot Springs, Arkansas.  Here are several sets of Holiday (is that David B. Treadway?) on KAAY, captured on a cassette tape over several nights in mid-1976, it's all DX reception in Missouri.   Thank you, Pat!

Thank you David Treadway for your thoughts on Uncle Lar.  I was also very saddened upon the news of Larry Lujack's death.  I grew up in the Chicago area, in the suburb of Evanston, and Lujack was a big influence on me too as I became fascinated  with radio and was so determined to work in the biz.  Remembering all the things he did on the air just makes me smile.

I love how Lujack made people laugh.  Sometimes it was a funny observation.  Sometimes it was his sarcasm, which seemed to fit Chicagoans' mood just right.  At a time when jocks were cheery, or pleasant "guests in the home", or felt they had to sound slick and Big because they made it to a top 3 market, Lujack was so different.  He spoke his mind -- if a song was bad he said so, if a Hollywood star or sports celebrity was an idiot he said so, if a complaining listener was a prude he said so, and he loved to expose the foibles of his bosses too.  He was grumpy a lot, but a funny grump. His putdowns had a smile behind them (usually).  To top it all off,  he enjoyed poking fun at the radio business and other stations and jocks around town.  Chicago was a very competitive, tough, territorial radio town and it was an unwritten wrong to mention someone else's call letters.  Lujack didn't care.  He did it anyway.

So the term "shock jock" was applied to him, but I don't really think it fit.  He was never profane. And now that he's dead, all kinds of stories are being repreated as to how kind, supportive and down-to-earth he was to people off the air.  Actually, those stories have floated around for years.

I'd like to share with you a short sample of his famous "Klunk Letter of the Day" feature.  This is from WCFL in early June 1973.

RIP Larry, and thanks for the laughs and inspiration. 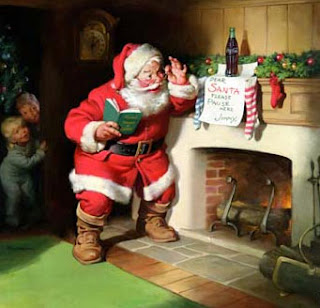 THAT'S RIGHT !  MY 2013 ANNUAL LIST OF CHRISTMAS AND HOLIDAY CLASSIC MOVIES IS HERE...WITH MANY BRAND NEW ADDS THAT YOU'LL WANT TO SEE FOR SURE

GREAT MOVIES, DVD's, and, Videos for your Holiday viewing are just a click-away:
Simply Click-On Here and it will take you to the this year's list of my favorite's for the Season !!

The email subject line read "Lujack. Gone." Ten letters, two words, in a dispatch from Radioink.com. I didn't need to read it, but I did anyway--looking for a loophole. The great Larry Lujack, of legend and fable at WLS in Chicago, died on December 18 at his home in New Mexico, following a battle with esophageal cancer.

He called himself Superjock, and nobody argued the point. That's how good he was. With or without his partner Tommy Edwards (a.k.a. Little Snot-Nosed Tommy to Lujack's Uncle Lar in "Animal Stories"), Larry Lujack owned morning radio in Chicago from roughly 1968 until 1985.  That's simplifying things--owing to his afternoon stint at crosstown WCFL--but in the throwaway culture of Radio, Lujack lasted a lifetime.

He didn't come roaring into Little Rock the way John Records Landecker did on the nighttime skywave. There was not a chance of hearing him in the daytime, but all of us at KAAY sure knew who he was! In later years, some of us would study his methods, looking for anything we could steal--but it didn't work. And that was because there was no persona or facade about him. Every time he opened the mic (or had it opened for him, because WLS was a union shop with board operators), he was simply being himself. What you got was The World According To Lujack. If he had to read some promotional announcement or station liner, it would be done his way. In a business built on smoke and mirrors, he was as real as you could be.

High ratings, big bucks and a truckload of awards and honors left him remarkably unimpressed. I think it was December of 1970 when I was able to pick up an afternoon broadcast on WLS. Newsman Lyle Dean was interviewing Lujack at his home about winning Billboard magazine's DJ Of The Year award and Lujack dismissed him: "It's okay, I guess, but you'll have to excuse me 'cause I'm doing something important right now." He was shoveling the snow out of his driveway!

It turns out that Larry Lujack's secret was no secret at all. Just goon the air and be yourself. Tell the people what's happening in your own words. Talk to 'em just like you'd do without a mic. It took me years to learn this--and I'm not surprised that people like Sonny Martin and Bob Robbins and Wayne Moss and Jonnie King and Clyde Clifford knew it all along!

So rock on, Uncle Lar. While you ride that great Skywave out through the Universe, we'll all be looking for some little piece of your legacy that we can adopt as our own. And we're sure we'll not see the likes of you again!


David B. Treadway
Doc Holiday VII
The Last PD
Posted by   at 8:20 AM No comments:

I think that's a fitting description of this final aircheck from the Wayne Moss Collection #2.  The date is Friday, September 24, 1971, one day before Arkansas plays Tulsa in Fayetteville.  "Beat Tulsa" is the theme of the day, Wayne Moss is pumping up the audience for the game and throws in a few Hog calls.  If it's not loud enough, then "I can't hear you!"

Something that's also notable on this aircheck is the countdown of the top 6 songs, just after the top of the hour ID.

Mitch Michaels provides the news.  The aircheck is telescoped, from 1:32pm to 2:28pm with one missing set of Wayne and the newscast is chopped a bit.  It sounds like the station was not tuned in on-center from :35 to around 2:40, then it's ok after that.

Thanks again to Wayne for digging up this series of airchecks and providing them to the Blog for sharing.

Bob Robbins began his Little Rock radio career at KAAY when his friend Wayne Moss hired him to do the early afternoon shift starting May 8, 1972.   You may have already heard part of this show, as one hour of it was posted on this blog about a year ago.  But I don't think anybody here at the Blog realized it was Bob's first day at the Big K.  Now, we know, and we have the entire show from the Wayne Moss Collection #2.

Every jock is a little bit anxious on their first day at a new station, sooo Wayne had some fun with his friend.  As the story goes, Wayne stood in the control room to help Bob out with the start of his first show.  Shortly before Bob cracked open his mic for the first time, Wayne reminded his old friend something along the lines of  “Bob, don't forget you are now on a 50,000 watt station with listeners in several states and probably there's a lot people rolling tapes on your first day!”  NO pressure!