TO ALL MY KAAY FRIENDS:
WHILE I WAS On-The-Air on JUKE BOX 96 Radio in St. Louis on New Year's Eve, 1993, I received a surprise phone call from my old friend the Legendary WOLFMAN JACK !

I had no idea that The Wolfman was going to do this...it took me completely by surprise.  I can't really tell you how grateful I was for his kind gesture, and if I sound excited on this recording it's because I truly was !

This piece of Audio History had been locked-up in my Audio Archives for all these years, but I wanted to share it with all of you so that you could once again hear his voice, and so that I could fittingly pay Tribute to this wonderful, truly professional, R&R Radio Icon:  My Friend, WOLFMAN JACK.

ALSO, I've added some of my personal thoughts & remembrances of this Radio Legend & Hall Of Famer on this same Page.  PLUS, if you listen closely, you can "CLAP FOR THE WOLFMAN"  with the Guess Who !!

Benefit For Bill Johnston, Co-Founder Of A Warehouse 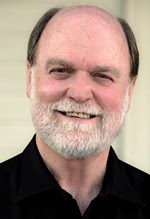 Bill Johnston, founding partner of A Warehouse, was diagnosed with throat cancer in January 2012.  There will be a benefit on his behalf on January 10, 2013, at The Joy Theater, 1200 Canal Street, New Orleans, LA; doors open at 6PM Central, with a silent auction, show begins at 7PM Central.  Tickets are $35 on Ticketmaster.com or by calling 1-800-745-3000.  If you cannot make the benefit, contributions can be sent to: Benefit for Bill Johnston, 2213 General Pershing Street, New Orleans, LA 70115.  For additional information, contact Louie Duet at louieduet@gmail.com

In a telephone conversation with Bob Wahl (http://www.blackstrat.net/), there were a few seats available.  Folks, this looks like a BLOWOUT!  Bob also told me that Bill was the guy who called the radio stations and booked and paid for the advertisements...remember all those great ads on Beaker Street?

There will be an all-star line-up and many fabulous items to be auctioned off by silent auction.

If anyone wishes, I can forward the e-mail Bob Wahl sent me, as there are many other details.

By the way, see this link for additional information regarding a memorial for A Warehouse: http://www.fox8live.com/story/20161644/effort-to-commemorate-the-warehouse-concert-venue-gears-up#.UM6bSHykhKc.email

Bill Johnston (along with Don Fox) brought a great thing to New Orleans with A Warehouse and many bands came there NOT for the money, but to play for the people and have a great time.  Let's see if we can help Bill in his fight against cancer.

Thank you, Bob Wahl, for all your efforts, and to Bill Johnston for A Warehouse, and for being friends of Mighty 1090 KAAY Blogspot!  And thank everyone for helping Bill Johnston....

MY KAAY CHRISTMAS IN ENGLAND ! 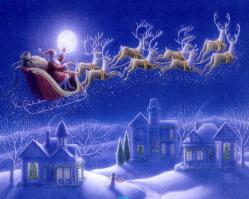 Since my Great-Grandparents on my Dad's side came from Ireland & England, and due to my acting for many years and having great insight into the works of Shakespeare, I've always wanted to travel to England & Ireland.  What better way to spend Christmas than in the land of  Dicken's "Christmas Carol" ?

Which brings me to 1969 and my working at KAAY:

I began at the Mighty 1090 on April 21st and, being single, occasionally found some nice girls to date.  But, in September of that year I saw a show at the Arkansas Art Center and was very impressed by one of the very attractive dancers in the show.

I found out from the program that the girl's name was Kerry, and sometime after the show got in contact with her and - since the feeling was mutual - we began dating in October...starting the beginning of a lengthy relationship.  But one of the things that really entranced me was that Kerry was from England !   She had actually grown up there, and later took up residence in Little Rock.

Since the Holidays were upon us, she asked me to spend Christmas with her and her family to which I agreed, but had to get the approval of the PD (Barry Wood) & Pat Walsh, GM.  They both gave their blessing, travel arrangements were made, and on Christmas Morning, 1969, Kerry & I headed for England to join her wonderful family for a most-unimaginable feast, and a day to remember...the first of many I would spend there.

How could we do it all in one day ?  Well, it was only about 26 miles from where we lived in Little Rock to England...England, Arkansas.  But it WAS England !

God Bless Us, Everyone, and especially Kerry...wherever you are.

MY 2012 LIST OF CHRISTMAS & HOLIDAY FILM CLASSICS IS READY !

SOME NEW ADDS TO THE "Extras" List this year...and ALL are worth a viewing between now and the end of the year !

Happy Holiday viewing to all of my Big K Friends...and thanks for all of your kind comments, and support of my Concept & Version of "The Breakfast Serial" since I began the Series in 1973 !

A very Merry Christmas & a Happy New Year to each and everyone!

Ready ?   Okay, Simply Click-On This Link  and it will take you right there!

Another in our series of Wayne Moss airchecks!  Herewith Greg Barman's comments:

"Sept. 3, 1973: Wayne Moss, 10:07-11:34am, in two parts, not continuous. Part 1 is mostly untelescoped; Part 2 is partially telescoped. Great quality; must have been a radio with a good high-end AM section. Beaker Street promos for O'Brian. Newsguy is Michael O'Sullivan."

Again, many thanks to Wayne Moss for his donation of fine historical audio; to Greg Barman for faithfully restoring and transferring said audio to digital; and to Dave S. for his computer know-how to bring this wonderful audio to the blog!

For you dedicated late-night Beaker Street listeners who remember those Warehouse commercials, all the way from New Orleans...and for those of you who actually got to attend concerts at A Warehouse...now, a tribute CD is available!  See the link below: 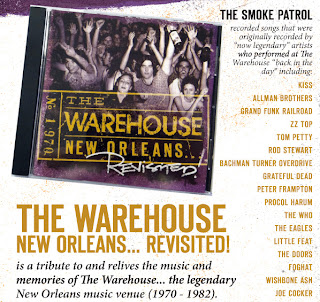 I plan on trying to get one for a buddy of mine, who attended Warehouse concerts, for Christmas.  You should, too!

And, in the meantime, please visit A Warehouse's website...there's always something going on!

Be sure to e-mail Bobby Wahl at his link on the website & tell him I sent you!  And how much you enjoy his website, as well....

FALL FUN ON THE MIGHTY 1090 / KAAY IN LITTLE ROCK !  Lots of neat stuff happening in that beautiful Fall of 1971: Razorback Football was super-hot, James Bond's "Diamonds Are Forever" was in theatre's everywhere,  "Columbo", and, "The Sonny & Cher Comedy Hour"  debuted on TV, William Peter Blatty's soon-to-be-classic volume "The Exorcist" was published, and Richard Nixon was the President of the United States.

This Page has plenty of pix & info on it, and you'll even get to see the Big K "Hogmobile" !  I remember this being a truly fun night On-The-Air for me...hope you enjoy this Aircheck as much as I did doing it !!   Wanna hear it right now ?   Okay, just Click-On Here,  listen & enjoy !!

ALL THE BEST TO YOU FOR THE SEASON !
Jonnie King
Posted by   at 7:18 PM No comments: 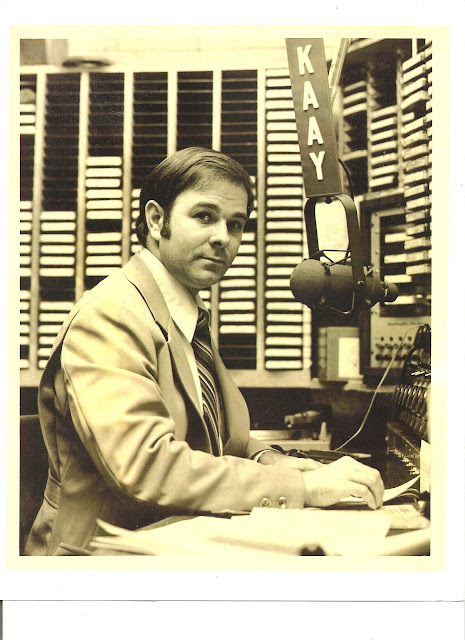 In my book: certainly The Man!  His name takes on mythical proportions.  And he will always and ever be one of the legendary people of KAAY!

Wayne sent along this studio picture to share with you, dear visitor.  And what a handsome picture it is!  You have seen studio pictures like this of other deejays from the past here on the blog.  This is the first- and only- one like it I have seen of Wayne Moss.

I must say folks that, when I call Wayne, that voice of his is still strong and authoritative; I revel in the fact that I can still talk to one of KAAY's living legends and listen to his voice, very much as it was back in the day.  It was a thrill for me to be able to call him on the phone and it still thrills me today to be able to talk with him (when my wife allows me to make long-distance calls)!

Wayne, please allow me to thank you, both on the behalf of the blog visitors and myself, for sharing all you do with us!  What wonderful, historical gifts you gave for us to enjoy!