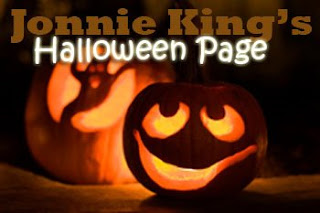 ONCE AGAIN IT'S THE FALL SEASON, my favorite time of the year ! And it brings with it that mysterious, haunting, Holiday: HALLOWEEN !
SO, FOR A SPECIAL GROUP OF HALLOWEEN SURPRISES, That I've Produced Just For You !
It's the "JONNIE KING HALLOWEEN SPECIAL" that includes: Movies, Music, Radio & TV... Complete With Ghosts, Goblins, and, Things That Go "BUMP" In the Night !

Don't look for a lot of "common" films that you may see almost every year on TV...there are a few of those, BUT most of my List covers some eclectic, esoteric, films that you might just have to try and find. Some of 'em are THAT RARE ! And, that's the good news because they'll be fresh viewing for you, your family, and your friends.

Ghosts, Goblins, Witches, Vampires, Werewolves, Mummies, and other assorted weird, strange creatures are waiting for you in my Special "HALLOWEEN FILM RARITIES FOR 2013". AND, once you've discovered the List for yourself, be sure you pass it on to your friends...but, make sure their heart can take it ! You see, through the years we've had reports of...well, that's a subject for another time.

BUT WAIT...THAT'S NOT ALL ! I'VE EXPANDED THE CONCEPT INTO: "THE ULTIMATE HALLOWEEN SPECIAL" ! It's a Complete Package that includes, not only Movies, but, Music, Radio & TV !

Over 200 Hours of work went into this Special Production, and I sincerely hope you'll enjoy it...

4. Music: My Custom Production of two Halloween Classics:
"Monster Mash" & "The Haunted House" with an Introduction by "Dracula" himself...BELA LUGOSI !

HERE'S THE LINK WHERE IT ALL BEGINS:
http://www.serial.thewwbc.net/gpage2.html

If you've ever seen the iconic "PLAN 9 FROM OUTER SPACE", or, Tim Burton's Oscar Winning "ED WOOD", you've seen "THE AMAZING CRISWELL" ! Cris Introduces and narrates "Plan 9" and has gained World-Wide popularity from it. BUT, he was much more than that:

He had his own TV Show in L.A. for years, his "Criswell Predicts" Column was in over 300 Newspapers & Magazines, and, his Radio Show of the same name was on over 85 Stations !

He was a super-showman appearing on the Jack Paar Show, The Tonight Show with Johnny Carson, The Merv Griffin Show, The Art Linkletter Show, weekly personal appearances througout the country, etc. He was a consumate Pro. He was also my friend, and for years, I've always dedicated my "Halloween Film Rarities" List to him.

Now, due to many questions about Criswell, and that dedication, I've created a Special Tribute page to him...and you'll find out how our lives connected with each others, and our friendship began.

I know you will enjoy the Info, the Rare Pix, my memories of Cris...and the "Old Hollywood" that he and I once lived in.

For "THE AMAZING CRISWELL" TRIBUTE...Simply Click-On This Link And You're There:
http://www.jonnieking.net/gpage29.html
AND, YES !   THERE IS A "CRISWELL/KAAY" CONNECTION THAT YOU WILL LOVE !!

Here are Martin & Jennings (or, variously, the "Jennings & Martin Program") on a Tuesday morning, October 10, 1972, getting outside the studio and doing a remote from 1st Federal Savings & Loan at the Park Plaza Mall in Little Rock.  They're helping people to register to vote, and to root for their favorite football teams.  Mitch Michaels handles the news back at the studio.  It's an untelescoped aircheck running from 7:17am to 8:02am.

Much thanks to Gary Pfeifer for this aircheck and the many others he has contributed lately.  You can check out the rest of his aircheck collection here.


(or download here)
Coming soon to this very Blog --  The Wayne Moss Collection #2!

This is another Martin & Jennings untelescoped aircheck from the year 1972, thanks to contributor Gary Pfeifer.  This is from Monday morning June 5, 1972 on a typical sunny morning.  It includes an episode of The Maltese Falcon on The Breakfast Serial.  The aircheck runs from 7:32am to 8:04am.

Here's another contribution from Gary Pfeifer, and it's Bob Robbins letting the good rock roll on a Sunday, July 9, 1972.  The aircheck runs from 3:17p to 4:07p, untelescoped with just a few breaks or missed sets here & there. The newscasts are from Michael O'Sullivan.

It's a Monday morning, April 17, 1972, and Texan George Jennings has decided to shake up Sonny Martin by challenging him to pose naked in a calendar foldout!  After all, the jocks at KLIF/Dallas posed nude in a big promotion there, so why couldn't Sonny? Don't Arkansans have the same nerve as Texans?  All the jokes fly in this brief untelescoped aircheck, from 7:09am to 7:39am. What will Sonny do?

Thanks again, Gary Pfeifer, for contributing this aircheck.

This is another contribution from the Gary Pfeifer aircheck collection, and as you'll hear from the voice at the beginning, this is originally from the collection of KAAY GM Pat Walsh.  Here is Phil North on a Tuesday night, February 22, 1972.  Untelescoped from 8:39p to 9:25p.

The sound quality isn't the best -- this aircheck was recorded on a cassette at very low volume, requiring a lot of noise filtering to pull the audio from out of the tape hiss.

From the Gary Pfeifer aircheck collection, here's Sonny Martin & George Jennings with a typical show from Tuesday, March 21, 1972.  7:11am to 7:56am, untelescoped.  On this show, Jennings has some fun calling the Starline dial-a-horoscope service in Birmingham, England.  And, an episode of The Breakfast Serial called The Invisible Ape.

This was an unusual morning on the Big K.  Sonny Martin was apparently "under the weather" on this particular day and George Jennings got behind the jock mic and hosted the morning show.  It's not easy to switch from being Mr. News Voice of Authority and sidekick, to being Mr. Morning Sunshine & Entertainment and oh by the way which button do I push to start the next song?  But he got the job done, and he got to play a record that he considered his kind of music.  While Jennings subbed for Martin, Doc Holiday pitched in for Jennings on the news.  Then Holiday took over the mic at 9:00am.

This untelescoped aircheck runs from 8:21am to 9:07am.  It's another great contribution from the Gary Pfeifer collection.