Doug Virden's VW, All Decked Out!

Here is my 1972 Volkswagen Super Beetle ready for football season.  It's a shame the Razorbacks aren't doing so hot right now. 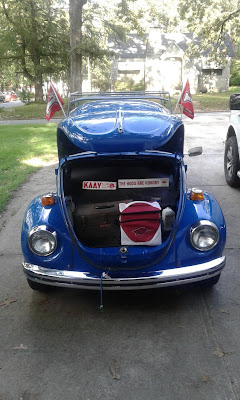 That's a sharp Bug, Doug!  My favorite color, too!

Thanks again to Richard Robinson for this bumper sticker!  I lament the fact that so many farmers are doing such a thankless task.  So many uninformed people think that meat and veggies come "from the c\grocery store" and have NO idea how to grow their own food, or where it comes from.

Having a farming background myself, I appreciate the farmers of America.  I have farmed beef, and later in life, had a huge garden...which lay fallow, after my hiatus awhile back while having to work two jobs.  But I still know how to grow my own food (and will get back into it this next season, since I am down to one job!) and appreciate those out there who work so hard to feed us.

"A Night To Remember"

(Hi, folks!  Here is an account of Professor Richard Robinson's experience at the latest KAAY get-together!)

On Friday, June 29th, I left my current home in Martin, Tennessee, headed for Little Rock, Arkansas. While Arkansas will always be my true home, my primary purpose for returning to "The Natural State" this time was to attend a special event. Dubbed a "Celebration of the Mighty 1090 KAAY," this promised to be a night to remember. My travel agent had booked me a room for one night at the Doubletree Hotel in downtown Little Rock. I arrived around 4:00 p.m. and checked in. The hotel, I’m happy to report, turned out to be an outstanding property, with an incredibly friendly staff and impeccable accommodations.

After unpacking and settling in, I texted one of my best friends, Sonny Rhodes, to let him know that I had made it safely to town. We had planned to have dinner together, prior to the event at 7:00 that evening. Sonny and I were in journalism school together at what is now The University of Central Arkansas, back in the 1970s. Both of us were influenced heavily by one of the most premier journalists ever to come out of Arkansas, J. Dean Duncan. Both of us had careers after getting our bachelor’s degrees, Sonny in print media and for me, it was radio and public relations work. Sonny earned his master’s degree in journalism from Ole Miss and I obtained a master’s in journalism from The University of Arkansas at Little Rock and later a Ph.D. in mass communication from Southern Illinois University Carbondale. After both of us enjoyed media careers, we turned to teaching. Sonny began teaching at The University of Arkansas at Little Rock in 2001 in the Journalism Departent, the same year I joined the Communications Department at The University of Tennessee at Martin. Currently, Sonny Rhodes is an associate professor of journalism at UALR and I’m a professor of communications at UT Martin. We have remained great friends all these years.

Sonny and his lovely wife Julie, picked me up at the hotel and we drove to the restaurant called "Sticky Fingerz Rock and Roll Chicken Shack" for dinner, before we crossed the street to the Central Arkansas Library System’s Ron Robinson Theater (no relation to me) on River Marked Avenue. The food and the beer were great and the company was even better. We had a wonderful dinner and visit.

Just before 7:00, we walked into the theater. Admission was free, although I would have gladly paid to be at the event. The theater is modern and clean. As an old theatre manager, I tend to notice these things! The moderator for the panel discussion was Tom Wood, a longtime radio fixture in Little Rock, although he never worked at KAAY. The panel included Dale Seidenschwarz, a/k/a Clyde Clifford of "Beaker Street" fame, David B. Treadway, the seventh Doc Holiday for KAAY, Matt White, a/k/a Sonny Martin, Barry McCorkindale, a/k/a Barry Mac and Bob Steel, a/k/a Michael O’Sullivan. Bob Robins was supposed to be on the panel, but we were told that he couldn’t make it, due to problems with arthritis. The audience was asked to keep him in their thoughts and prayers.

Frankly, I was a bit surprised by the size of the crowd. The theatre was essentially full, with an estimated 300 people in attendance and that isn’t a Chamber of Commerce estimate. The people that showed up were there because either they listened to KAAY or they had heard of KAAY. There were even some children present, who had obviously heard of "The Mighty 1090" from an early age.

For nearly three hours, the crown heard from these icons of broadcasting, each one delighting the audience with stories, jokes and wonderful recollections about their time working the "The Friendly Giant." When it was over, we didn’t want to go home and neither did the panel.

During the panel discussion, we were given a lot of information about our beloved KAAY. Did you know the name of the first song that was played on the station? It was "Baby Elephant Walk," aired continuously for 24 hours. The name of the background music/sound effects for "Beaker Street?" Originally, it was the dream sequence from the motion picture "Charade," by Henry Mancini Later, the selection was "Cannabis Sativa," by Head. Clyde Clifford talked about "Beaker Street," of course, but also his other duties at the station while he worked there. David B. Treadway, who has a most incredible memory, told several stories and added to many of the others. Matt White (Sonny Martin) discussed the experiences with morning radio on "The Friendly Giant." He informed us that while he was and is a morning person (he’s still doing mornings on another station in Searcy, Arkansas), Bob Robins was not. I think you could say that about a lot of early morning radio personalities. My motto has always been, "The early morning radio show you do for free; they pay you to get up early!"

Barry McCorkindale added his comments. Barry was one of the last employees to work at "The Big K" before it "Went to God," as Clyde Clifford is quoted as saying. Barry has spent many hours digitizing old tapes that were found at the transmitter building at Wrightsville. He has also been a big factor (along with Bud Stacey and others) at keeping this blog site and the memory of KAAY alive.

When it came time for Bob Steel to offer his insights, he did it in the form of several stories. Bob Steel is another dear friend of mine, whom I have known since we were in college together. Bob was another one of those many "Dean Duncan disciples" at UCA whose influence inspired us to go into the world of journalism and elsewhere.

For those who don’t know him, Bob is one of the best storytellers and funniest people I have ever known. He had the audience in stiches with his stories about George J. Jennings, Jerry Pitcock and more. It was rich. One story was about Jennings, who meant to use the work "tentacles" at the end of a newscast, prior to dishing it over to Steel, who was going to read another report live on the air. But, Jennings said "testicles," instead. Everyone on the panel that night had much to offer. The entire audience was enthralled, so say the least. The only thing missing were the audio clips of programming. The clips were ready, but there just wasn’t time to hear them! However, I don’t think that anyone felt slighted in the least. The final treat capped off the night perfectly. It was Barbara Rainey accompanied by Buck McArthur, who played and sang one of the great staple songs from the "Beaker Street" program, which is "Cindy’s Crying." Although it has been a few years, and many of us are much older now, their voices were in full form. For a few minutes, we were all young again, listening to "The Big K" and "Beaker Street." It was magical.

Based upon the crowd and the feedback, it’s been suggested that there be more of these programs about "The Mighty 1090." I know that I would certainly like to see that. KAAY is now nostalgia, fond memories for us; and we all love those memories! Because of people like Bud Stacey, who through sheer force of will, has maintained this blog site, and many others, who have kept this extraordinary station alive on social media, owe a great big thank you to all of the people who made the night possible. It was truly special. I certainly hope there will be more sessions. If so, I plan to attend them, if at all possible. This one was truly a night to remember.