Answers At Last (David B. Treadway)

I don't know if it was a privilege or a curse, getting to watch from the inside as KAAY moved from 1425 West Seventh Street to the new building at 2400 Cottondale Lane in 1976. A few things troubled me from the moment Dave Montgomery unscrewed the white key from the microphone switch and told me to make sure it got onto the RCA console in the new control room. Now I think I've got 'em figured out--and I'm afraid they are the definition of Tragedy. That move across town was the beginning of the end.

It only took a few days in that wonderful new facility to convince me that something was Not Right. There were some intangibles that had not made the move with us. That old KAAY Spirit never set foot in the new building. The magic just did not transfer when the people did. For years, I wondered where it went, and now I see that it already had been killed off. It was dead before we tore out the last turntable in the old studio.

There were a couple of craters in the Promised Land. Operations Manager Wayne Moss was gone, along with General Manager Pat Walsh. They had both been replaced shortly after LIN Broadcasting sold the station to Multimedia, and if the new guys had a clue at all, it didn't show. Yeah, that's my opinion, but you'd have no trouble finding other insiders who'd be a bunch more blunt.

Replacing Pat Walsh was a huge and fatal mistake. You're getting rid of the only GM in LIN Broadcasting's radio division who once billed a million dollars in one year with a stand-alone AM station? "There ain't but one set of ratings that matters a damn, and that's how much money did you make." Pat told me that when I was 26 and I have yet to meet anyone who can counter it.

The image of Pat Walsh as a hardboiled, obnoxious, money-mad ogre is a fair one--and I believe he cultivated it. But there was a lot more to Pat. His genius was in his belief that you hire the best possible person for the job, then just let them do it. Reward them when they succeed, chew their hindquarters like a starving alligator when they fail--but leave them alone as much as possible and let them work!

Wayne Moss thought like Pat. If you were good enough to be on the air at KAAY, you didn’t need somebody hovering over you. If you screwed up beyond a certain point, Wayne would be on you like two coats of paint (ask me how I know this), but he mostly laid out the path and trusted you to follow it.

The new Multimedia Program Director seemed to take pride in being the exact opposite of Wayne. It was like he never trusted his staff. It seemed as if he was waiting for us to mess up so he could pounce. Very quickly, the perception was that we couldn't be counted on to do our jobs properly, that we needed constant correction. It was a rude slap that long-timers deeply resented, and I think it was a main reason that Sonny Martin III soon bailed out for a new gig at KSSN across town. It wouldn't be too long until Bob Robbins followed him.

You can't be trusted to do your job. Somebody's got to watch you at every moment. There's the difference between KAAY's glory days and the shell it soon became. It's an attitude that's been stifling and crippling Radio from that day to this. It's such a simple thing that it's taken me nearly forty years to figure it out: complete control destroys the soul.

I don't blame New PD 1 for the way he ran things, nor do I blame the ten or twelve who followed him for their methods. Likewise, New GM 1 was just doing things the Multimedia way--as were the half dozen or so who came after him (all of this turnover in well under ten years). The blame rightly belongs to Multimedia Radio, which could not stay out of its own way long enough to let KAAY function.

I look back now and am reminded of the day in April 2011 when I touched the ruins of that glorious RCA BTA 50-F transmitter in Wrightsville. All they had to do was leave it alone… 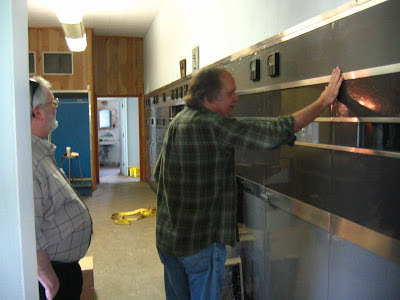 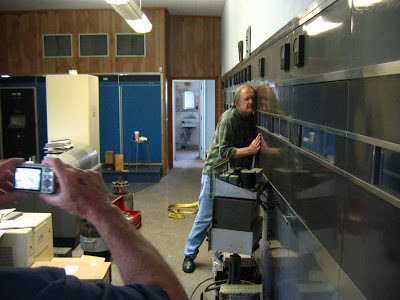 You've heard it, possibly during the Barry Mac shows, possibly on the Timeless Tracks post, but here it is all by itself!  The folks at KAAY constantly worked with new ideas and technology to bring catchy announcements, station i.d.'s, commercials and what-have-you to keep the listener glued to 1090!  This is one of the fun things they did:

Much of this stuff was done with NO synthesizers and all by analog means- NOT digitally!  These radio pioneers were 'way ahead of their time and other radio stations could only HOPE to get near their competitive and genius level! 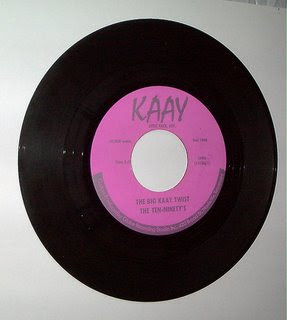 I could have sworn that there was another picture of this promotional 45 record, made for KAAY, but maybe my mind is going...or maybe my memory isn't as good as it used to be...anyway, borrowed from A. J. "Doc Holiday" Lindsey's archives, in his own immortal words:

"One of the early promotional 45 record give-a-ways at the Mighty Ten Ninety was "The Big KAAY Twist". Originally it was a jingle produced in Nashville. The full version on the record runs 1:30. As good as any of the twist records out at the time, the thousand or so pressings were quickly given away. This would be a great find if you could turn one up today. I have seen one go on Ebay for $30.00. You can have it free! Here it is:"

You've seen several Silver Dollar Surveys we've been able to bring you here, but we realized we had a jingle in the archive we could bring you!  Again, in A. J. "Doc Holiday" Lindsey's own words:

"Mike McCormick A/K/A, Jim Hankins, originated the original KAAY, Big Kay, Friendly Giant, Mighty 1090, jingles and "sound" of KAAY. This Jingle is a very early KAAY jingle that mentions the Silver Dollar Survey shown in earlier posts. It also mentions the friendly giant and the logo line K A A Y, Tune Ten Ninety. In later years the word "tune" was dropped, but for several years it served the purpose of establishing a logo that listeners could and would sing any time they saw the mobile unit on the streets. Click the link and enjoy a 1963 jingle."

And it sounds great, too, almost stereo-like!

I'd like to thank Dave S. for his keen eye and reminding me these were out there!  We hope to bring you more Retro as we find it!

KAAY Back On The Air

Doug Virden has reported that, as of the evening of February 6, 2013, KAAY has returned to the air...and that he wished the music from the 60's and 70's would have returned, as well.  Nonetheless, kudos to the technician(s) involved who got the station back on the air!

Here again, folks, is Buddy Karr!  From the A. J. Lindsey recovered archives, Dave S. brings you this audio tidbit.  I believe it to be of the same era of the previous post around 1963...roll it, Dave! 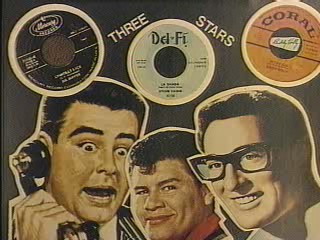 ...it was the day that the plane carrying Buddy Holly, Richie Valens, and, The Big Bopper, crashed in a field near Mason City, Iowa, killing all three singers, and the pilot.

DON McLEAN relived that incident in his instant-classic hit "American Pie". I was the Music Director at KAAY when it was released in the Fall of 1971, heard it way before I put it on the air...and it just blew me away !  He termed that day... "The Day The Music Died", and since then that's the way it's been known.

I've had this rare, historic, News Bulletin about the crash on that day, February 3, 1959, in my Archives for a long time, but I don't know where it was originally broadcast or who the announcer is. When I decided to add it to the WebSite, I added a little bit of music from Buddy Holly, and Richie Valens, PLUS, the voice of The Big Bopper with his legendary Intro to start things off...to give it a little more balance and give you a chance to hear their voices again.

This special, rare audio that your hearing is not very long...but it is very important. And, maybe next time when you hear Buddy Holly, Richie Valens, or, The Big Bopper on your radio you'll think about the musical legacy they left us, and remember that they left us way too soon.

Simply Click-On Here , listen to the audio, read my personal thoughts on this tragic occurence from 54 years ago, and, remember those 3 Legendary singers whose music will live on forever.

My best to all, and thanks to Bud & the Crew, plus all who take the time to visit us here at The Mighty 1090 / KAAY, forever, Blog.