Once again, headed up by George Jennings, we have the 30-minute news program of KAAY.  "Yup!" is the word regarding a Cub Scouts ad.

Following is an interview with Winthrop Rockerfeller regarding the finding of three bodies- or, the skeletons thereof- and the possibility of turning the issue over to the Department of Archeology!  Apparently, there were indentations on "the Cummings property" that led to the investigation...very interesting!

Folks, don't you think Greg Barman has done an exceptional job of restoring this audio?

Here are a couple of shots where Steve is enjoying from the crowd's perspective.. here he is with Bill Jackson ("Ken Knight")- look at that grin! 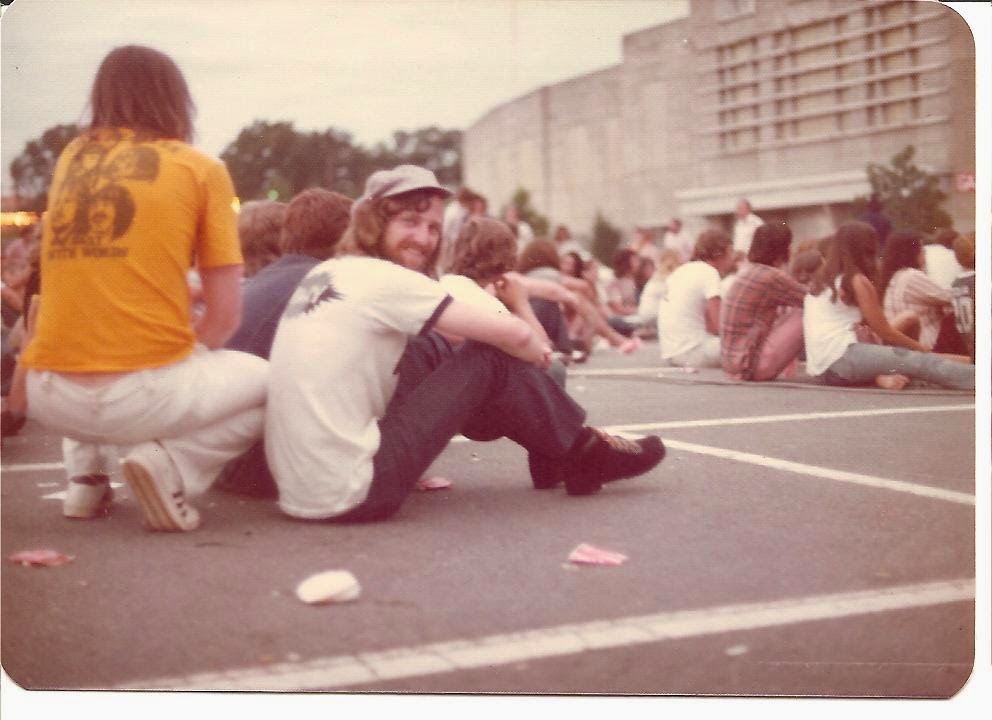 Naw, that can't be Bill's good side!  Not with THAT voice over the radio!  Whew, I'll bet that pavement got hard after a while... not only that, it would have destroyed Bill's white jeans to sit on it!

Here's Steve out in the crowd with a sweetie!  Man, the music must've been good, they're sure concentrating on the performance, it seems! 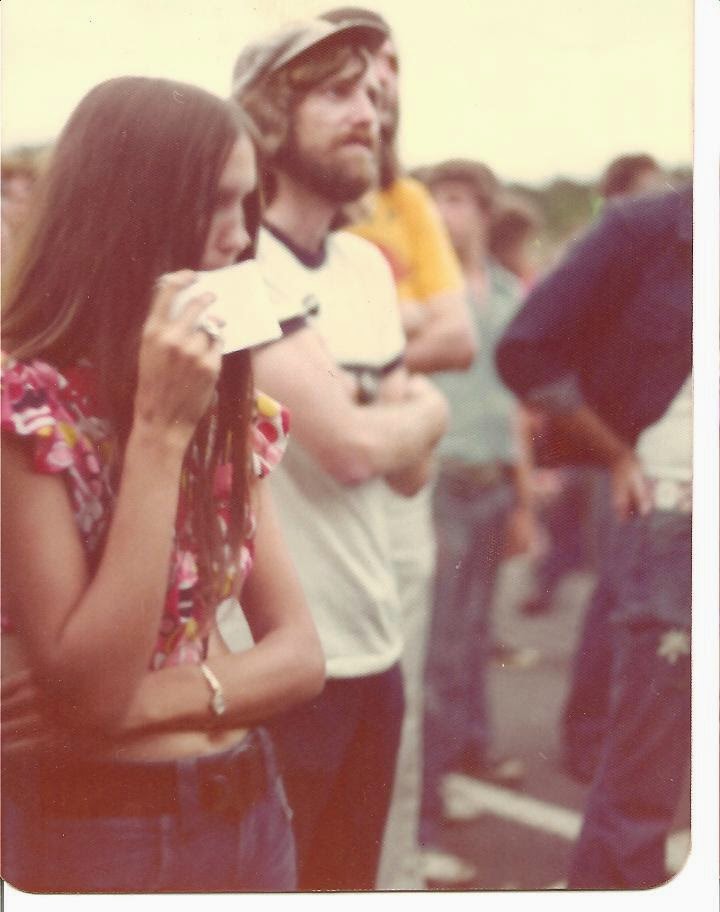 Both shots sporting the "River City" T-shirt!  Hey, Steve, I still have a couple concert T-shirts myself, but I can't fit into them....

Hold on, stand by for one more of Steve's pictures and one of mine!

The Ray And Ram Show #5 - Lester for President

OK, folks, wrap those ribs tight, here comes more comedy by Ray Lincoln!  I'll bet he had great fun- and either had the blessing of his Program Directors, or caused them a lot of stomach acid!


Or, listen/download from here:

Thanks to Mr. Greg Barman again for his audio wizardry!  By the way, Greg has been indispensable, coming to the team when he was needed the most.  Greg, would you do us the pleasure of introducing yourself sometime?

We have a couple more shots of Steve at the concert, featuring the local band "River City"...this one, the photographer may have been going for a special effect OR forgot to use the flash! 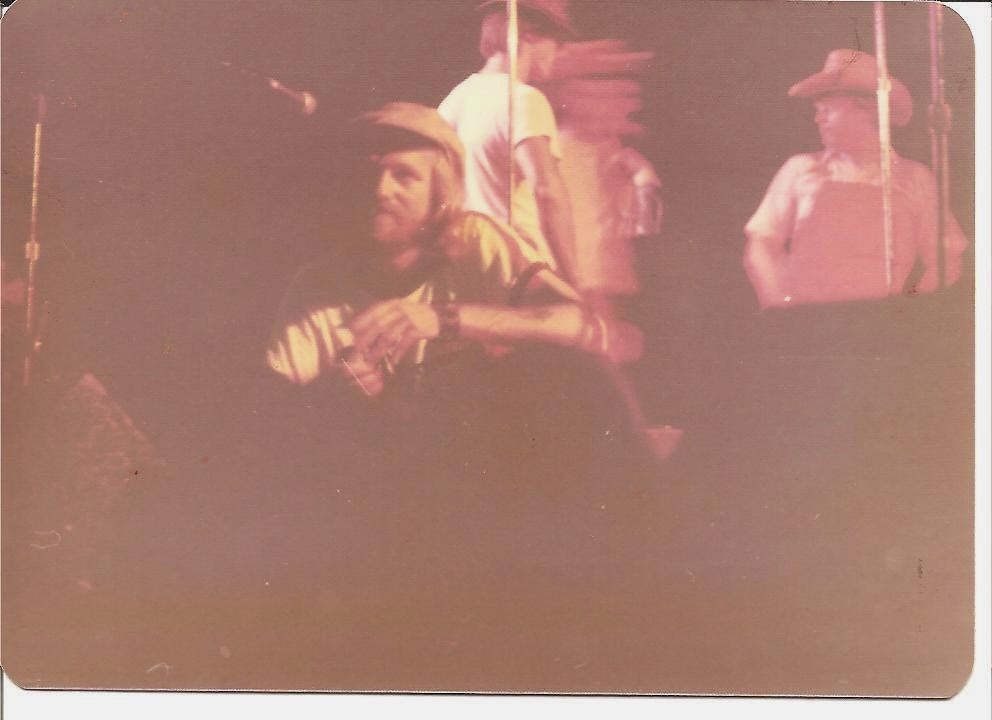 I forgot to ask Steve if those were band members up there behind him, or roadies getting things ready for the next act....

Here is a better picture.. I'll bet Steve had emceed much of the time, since he's looking a little tired: 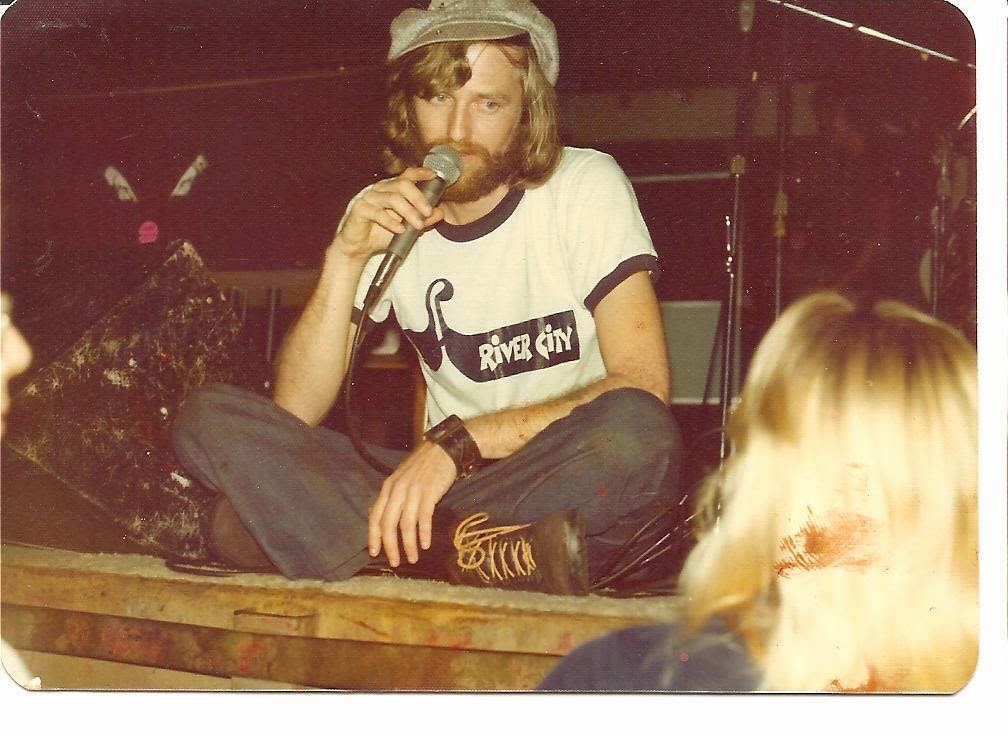 No matter how fun it looks, I know it's hard work keeping the crowd entertained in-between acts...hey, look at that sporty "River City" T-shirt!

By the way, thank you Steve, for sharing...hold on, folks, we're not through yet!!! 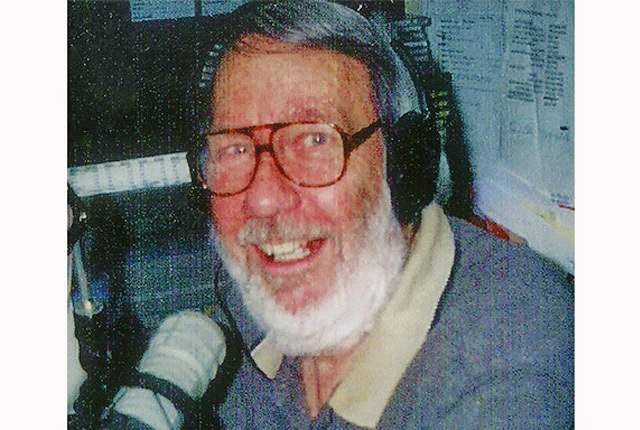 Howard has been mentioned many times on this blog; quick of wit and extremely talented, he was often called upon when material was needed, especially on "Ear On Arkansas" parodies.  It was mentioned that when someone called him, he could have a whole show penned and ready within thirty minutes!

(I have the red 1966 and the blue 1967 "Ear On Arkansas" albums now and will post pictures of the latter in the future.)

"Howard Watson used two other stage names during his career. He used the name Ken Knight on KAAY radio on a program called “The All Night Satellite.” Later he used the name Len Day at radio stations in central Arkansas, including Hot Springs Village.", as reported in the first link above.

When I was in Little Rock back in 2011, I hesitated contacting Howard's son Jeff, because I didn't want to inconvenience Howard; some said he was embarrassed by his speech after he had a stroke in 2004 and rarely received visitors.  I can't remember which, either Charlie Scarbrough or Jerry Sims drove me by Jeff's residence, where Howard lived, just to show me.  So close, yet so far....  I regret now not having called Jeff, as I missed possibly meeting one of The Greats of KAAY and Arkansas broadcasting history.

If ANYONE has any previously-unreleased audio of Howard, please contact me, as I would be honored to post it here, in his memory....

See you later, Howard....thank you, Doug Virden, for alerting me.

Here is another 30-minute news program, headed up by George Jennings, the Managing Editor of KAAY's News Department.

It opens with a Public Service Announcement (PSA), then rolls into a report on North Little Rock and Pulaski County schools...followed by an ad for the Navy, then into a press conference with Winthrop Rockefeller.  Listen carefully, a Democrat voted for a Republican back then!

"Steve Scott" In The Studio And Remote!

Hey, look at this face!  You could TELL Steve was having fun behind the microphone at KAAY!  This is another picture Steve Morris has shared for the blog: 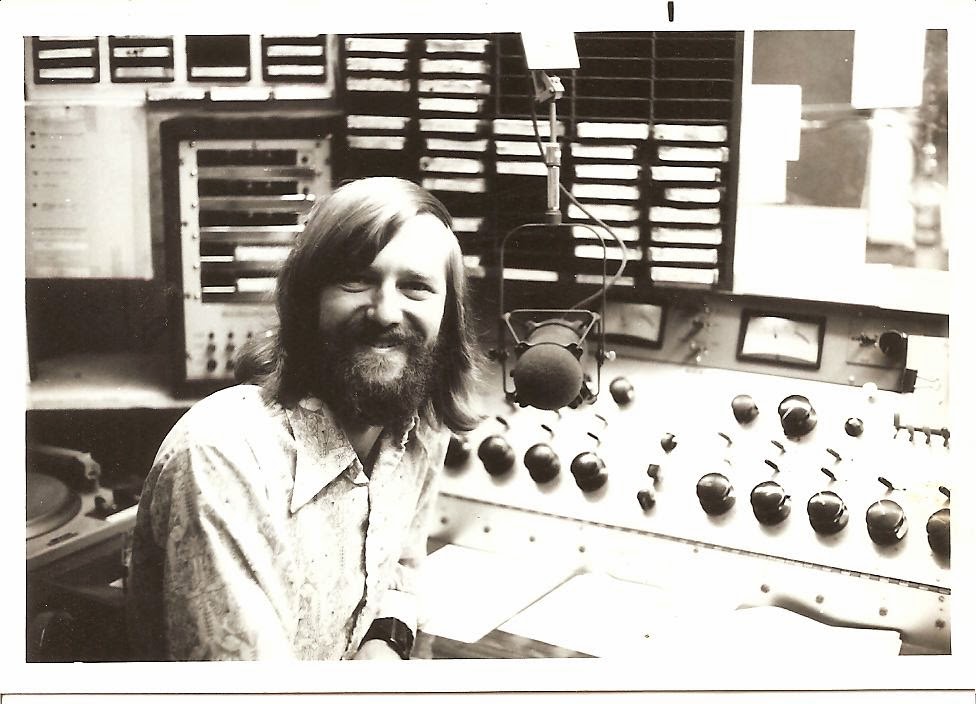 You've seen pretty much the same set-up in other deejays' pictures from KAAY...look at those knobs!  I wish I had a microphone like that for my Amateur Radio station...one of my old tube radios, a 1953-ish Johnson Viking II, would benefit from its audio!

Next is a shot of Steve outside the studio, with "Bob Robbins" in front of the famous blue "Funmobile"- look at those grins!  Don't you know it was a THRILL to know your voice was going out over a 50,000-watt blowtorch, almost all over the country (and part of the world)? 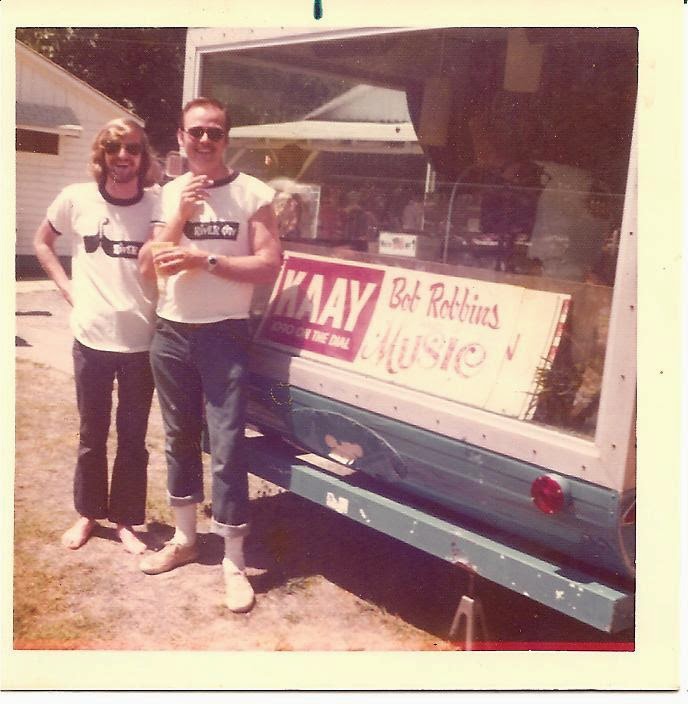 Looks like "Bob" went a little "retro" with his style, yeah?  Of course, KAAY played all kinds of music, from early to latter-day rock and some country, there could have been a theme to this remote!

But wait, there's more!  MUCH more!

I don't think these are the full-length shows, only portions of them...needless to say, these are golden bits of audio recently uncovered and posted by "Tony Marlar" on YouTube- so thanks to you, "Tony"!

Ah, yes, I love this stuff!  Finally, a face to put with the voice!  Steve Morris and I did the math, and found that I HAD to have heard him on the radio!  It was the right years, the right time (evenings), etc.!  So, without further ado, here comes more visual gems!!!

The following is a picture of "Steve Scott" (Steve Morris) on the right and "Sonny Martin" (Matt White) on the left, sporting KAAY T-shirts.  I forgot to ask Steve where this was, however.... 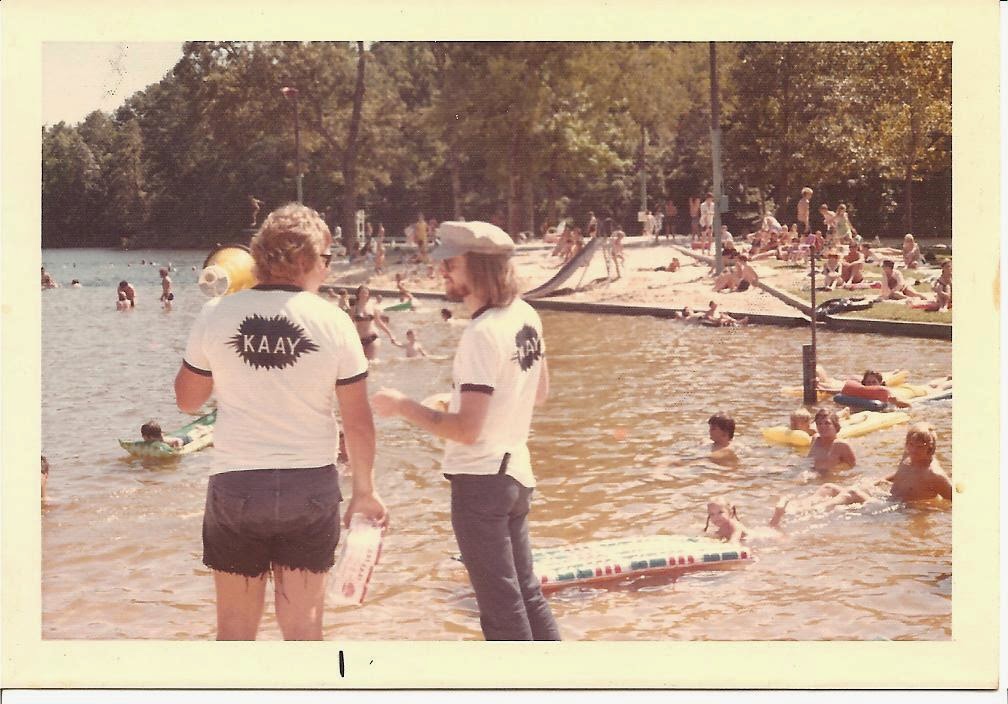 Looks like "Sonny" had the legs for the event pictured!  The next print is a "Duo Snap Shot" of Steve and "Bob Robbins" in the blue "Funmobile".  I suppose one could pass these out to fans and the latter could keep one in his wallet to swoon over while they listened to The Greats on KAAY! 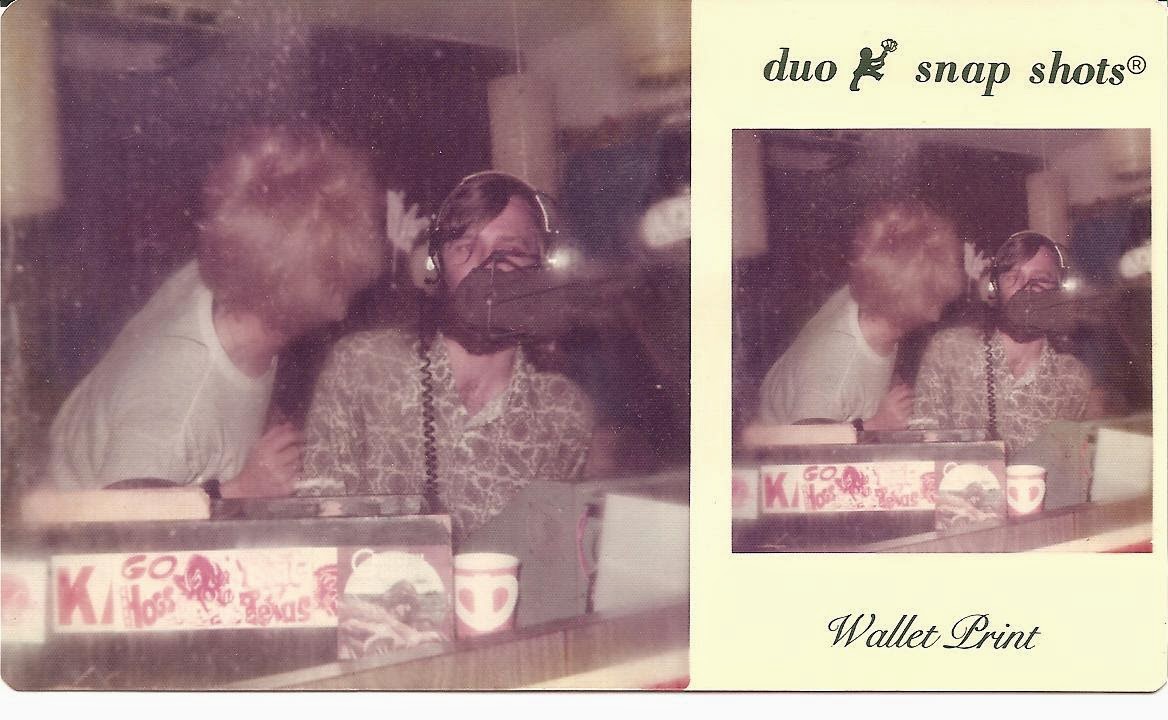 Feeling better now?  Good!  How about some more hilarity?

Here comes Ray Lincoln again with another show!  I must give credit to "Tony Marlar" who originally posted these shows on YouTube; unfortunately, he has not replied to my questions on the Mighty 1090 Facebook page, so I can't tell you any more....