"I have about 30+ hours of Beaker Street would anyone be interested in these? I have put a lot of time and money to converting these from cassette to cds. Also I have the original cassettes. Anyone interested? on Beaker Street Head Bed - updated re-post"

John Kassen, would you please contact me?  We have tried contacting you on Facebook, to no avail.

And if anyone knows John, please contact me, as well!

I apologize for not getting this on earlier in the month...what with my work/sleep schedule, I've been a zombie for a while.  Nonetheless, happy 58th "victory", Barry McCorkindale! 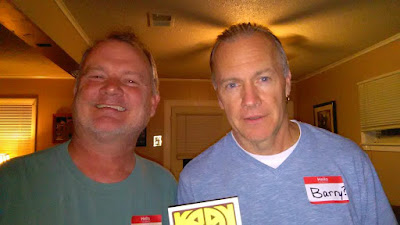 Barry is pictured here with blog friend Doug Virden, obviously at a function (party for Barry?).  Barry is just days older than I am.  Barry also contributes heavily to the blog with audio programs and is highly appreciated!  Dave S. loads the programs for us on the blog...thanks, Dave!

Again, in celebration, and thanks to Doug: Happy birthday, Barry Mac!

During the earlier days of this Blog there were many airchecks posted and stored on the Podmatic servers.  But gradually some of those audios are disappearing from Podmatic.  We plan to repost some of them so as not to lose them, and in some cases see if we can improve the quality.

Here is an untelescoped aircheck of Phil North, aka Eric Chase, posted in 2010.  The original posting puts the date as Wednesday April 14, 1971.  But based on the comments in the aircheck, it sounds to me like the date is more likely Saturday morning, April 17 1971.  It's a weekend morning show where Phil is subbing for Sonny Martin, and Holiday does the news.  The original aircheck was noticeably slow, and it is corrected here for speed/pitch and levels.

It's pretty funny when the intro to the news gets messed up, and Phil and Holiday try to talk their way out of it.

Jimmy Van Parr, 80, of Conway, died October 3, 2016. Born November 21, 1935 at Tuckerman, Arkansas, he was the son of Van Kermit and Jenny Belle Williamson Parr. He enjoyed farming in the Wheatley, Arkansas area before moving to Little Rock where he became a farm broadcaster for the Arkansas Radio Network and later owned and operated the Blue Plate Special Restaurant with his wife, May. He was a member of First Baptist Church of Little Rock.
Preceded in death by his parents and his first wife, May Phillip Puryear Parr, he is survived by his wife, Mary Flanagin-Parr; children, Jimmy Parr (Wendy) of Long Grove, Illinois, Lisa Anne and Mary Kay Parr, both of Germantown, Tennessee, and Bill Parr (Wentz) of Collegeville, Pennsylvania; sisters, Nancy Roylance of Spokane, Washington and Judy McGaugh of Chesterfield, Missouri; a brother, Kenneth Parr of Hurst, Texas; grandchildren, Cassie Farrier, Mark Farrier, Emily Parr, Ellen Parr, Michaela Parr and Chase Parr; and one great-grandson, Noah Farrier.
Funeral Services will be held at 10:00 a.m. Friday, October 7, 2016 in the chapel of Griffin Leggett Healey & Roth, 5800 W. 12th Street, Little Rock, 72204, (501) 661-9111 with Dr. Jonathan Curtis and Dr. John Wright officiating. Entombment will follow in Forest Hills Mausoleum. Visitation will be from 6:00 p.m. until 8:00 p.m. today (Thursday) at the funeral home. Memorials may be made to the American Cancer Society


Thank you, Doug.  May Jim rest in piece.  Does anyone have any audio of Jim, anywhere, at all?  It doesn't necessarily have to be from KAAY....

Beaker Street as heard from Cuba!

Much has been written here on the Blog about KAAY's influence in Cuba -- how strong its' nighttime signal was on the island, how the US Government used KAAY to broadcast to Cuba during the 1962 Cuban Missile Crisis, and how listeners in Cuba wrote fan letters to KAAY, especially for Beaker Street.

Recently we were contacted by someone who not only listened to Beaker Street in Cuba -- he even recorded some of it!  He found his old cassette tapes of Beaker Street and digitized them for us to share.

His name is Gueorgui Lazarov Stoychev, George for short.  He's from Bulgaria, lived in Cuba from 1966 to 1975 and again in the late 70's.  Here is his story:

"Every Cuban in ages from 16 to 30 was into WQAM (that's Miami) during the day, and KAAY during the night, especially for Beaker Street.  So was I.  The recording of the 3 files I sent you are mp3's and were done some time between 1970 and 1975 in Havana where I was living at the time. I edited them now, just for this purpose. At the time I didn't own a tape recorder or a radio cassette recorder, so I always had to borrow one from some friend that had one. Sometimes there was only a tape recorder and I had to use a mike to record from the radio. Cables? No such luxury.

The purpose was to tape all the music that I liked but there was no way to get in Cuba or in any of the communist countries, and by the way, was forbidden.  Cassettes were expensive like gold and scarce, so space in the cassettes for music was more important and not the DJ's comments or any commercial or radio station ID. Anyway, being the show very late at nite, it began at midnight Cuban time, sometimes I fell asleep while recording and some things got recorded and survived at the end of a tape.

Decades later, when I was digitizing the tapes whose music was nowhere to be found on any format, I discovered KAAY The Mighty 1090's Beaker Street's relics. Not much, but it's something new for anyone interested in preserving what was, if you ask me, the radio station and the radio show that made a mark and history in the industry never unbeaten by no one. People living in America or anywhere else outside the Iron Curtain took all that for granted, but for me and a whole bunch of Cuban friends, all those bands, songs, albums, were something like given by God. The DJs knew what they were talking about, knew about music, had and gave information, not like now when radio is ... there are no words to describe the kind of crap radio is now days.

So, that's basically, there are many other details, perhaps some other time, if I find something new, undiscovered.  Thank you for allowing me to share with all the KAAY and Beaker Street fans the few minutes I have with the hope that if there are some people out there, that have Beaker Street shows or/and daily programming, please share them complete with the music, not only the airchecks. Listening to complete shows is like traveling in a time machine to better times and better music.

Here are 3 airchecks George recorded in Cuba, around 1974 or '75, one with DJ John Roberts and two with Ken Knight:


(or download here)
After living in Cuba, George also spent time in Mexico where he worked in radio for a while and was involved in the music business:  http://www.metal-archives.com/artists/Gueorgui_Lazarov/127549

Thank you, George, for keeping the KAAY flame going and for bringing those old Beaker Street tapes back to life.