HAPPY ANNIVERSARY KAAY!  KTHS became KAAY 52 years ago on Labor Day, 1962.  This weird format could be heard "before the button was pushed":

Yes, it was the "Baby Elephant Walk" and deejays were reading the Little Rock phone book over the audio.  What a gimmick!

Dave Schmidt built an archive from A. J. Lindsey's KAAY blog; in commemoration, Dave, Greg Barman and myself will be sharing things here from that era....

Hey, how 'bout this flyer? 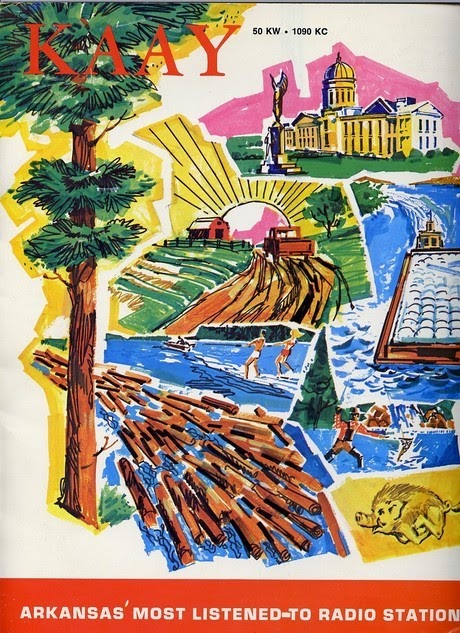 Please stay tuned for more, as we celebrate the 52nd anniversary of KAAY!

Here are more ads by Wayne Moss and other announcers (can someone identify them for us, please?)

We have a Moses Record Shop special by The Hollies, Sabric Fabricks, Wallach stores and J. C. Penny ads, among others...there are a couple of false starts & bloopers, which make it all the more interesting- roll it, Greg!

I think I'll go down to Wallach's and get one of those fine televisions, or maybe go to the night owl Penny store sales & get some new threads...Greg, you want to come along?

These may not be as glamorous or heady as some of the music we've posted, or that of the ever-popular Beaker Street, but it IS history, nonetheless.  I don't blame anyone if they don't want to sit & listen to political or other news, but some may find it interesting from a historical point- some may have worked with the particular people interviewed in these recordings or had something to do with campaigns or other events.  With that, we go into...

...George Jennings opening this news magazine dated 10/20/1968- the opening public service announcement or advertisement was for the Big Brothers of America.  The main focus was on the Arkansas Corrections Department, mainly at Cummings and shots being fired:

Some Treats To Come! (Or, Old Is New Again)

Dear reader and visitor, a milestone is about to be reached...one that we want to spring upon you within a couple of weeks!  We'll keep it a secret for now, so stay tuned and keep your eyes peeled!

I've thought it over and discussed it with the guys...and we believe it'll be a good thing.  Hopefully, you'll be as enthused about the upcoming posts as we are.  We have some ideas to bring you some things that are of importance that some of you may or may not have seen nor heard before...

...so, before I give it away (giggle!), we'll keep working on this project in earnest- and we hope you'll be pleased and not disappointed.

Get ready to have some fun!

OH BOY!  I'd tried to reach Bob Steel via several means- and had missed him by mere minutes when I was in Little Rock back in 2011- but it was through LinkedIn that I was able to get a message to him- and he replied almost immediately!  Bob is a consummate broadcaster and many, many people love his style.  We've posted about Bob a couple of times here on the blog...just type in "Bob Steel" in the upper left-hand corner in the search box.

Here we go!  Without further delay, is what Bob sent me for the blog:

"It was nice to hear from you.  I worked at KAAY in the News Department Monday through Fridays and on Saturday mornings I did “Solid Gold Weekend” until noon.  We all worked six to seven days a week but always at least six.  They gave me the name Michael O’Sullivan.  Michael O’Sullivan was actually the Chief Accounting Officer for the LIN Broadcasting System.  I thought that was kinda funny because I was never very good with math and I thought Bob Steel was a pretty good air name.  It’s my real name too!  Pat Walsh explained to me that he had purchased signs on the back of Yellow Cabs with caricatures of the jocks –and if any of them left, he didn’t have to change the signs.   “You're Michael O’Sullivan,” he said.

The Rolling Stones in Arkansas!

Courtesy of Doug Virden's post on Facebook, here is video of Keith Richard and Ron Wood getting arrested in Fordyce AR, July 1975.  From the Pryor Center for Arkansas Oral and Visual History.


Post by Pryor Center for Arkansas Oral and Visual History. 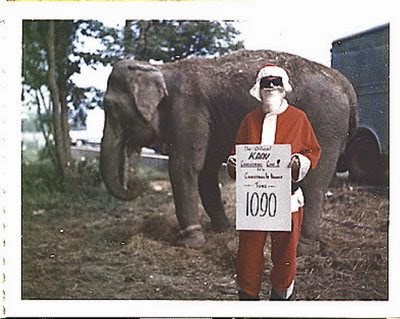 From A.J.'s blog, once again we have Jim Pitcock, a.k.a. "Ron Owens", as Santa during a "Christmas In August" promotion.  The following are A.J.'s words from his blog, with link:

"Contests and promotions were contributing factors to the success of KAAY. There were always several contests going at once. A variety of contests with different ways to enter, were key factors. In those days, many of the proof of listeners was from the mail that was received from across the country.

One contest I found a picture to support was the "Christmas in August" contest. I don't even remember the details, perhaps one of you can refresh my memory. I know it involved Jim Pitcock whose air name was Ron Owens (I think). We thought it was so funny to dress skinny Jim in a Santa suit with NO padding and drive him around in a convertible in the heat of an Arkansas August."

I don't know the reason for the title, "Never the 91 caller", only A.J. knew for sure...so, if there is anyone out there who remembers the details of this contest, please e-mail me, so I can add your comments here for everyone to enjoy! 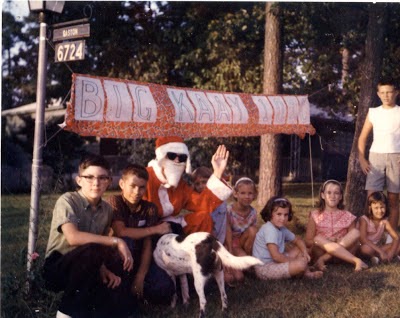 Some of you may remember this from A.J.'s blog- and, it being August, I thought it would be fun looking back and remembering!  In the words of A.J., with link added:

"This picture is from a Christmas in August promotion we ran at KAAY. The Santa in the dark sun glasses is Jim Pitcock with no fat padding. We thought this was such a great gag and had him ride around in a convertible with the top down. People were to put signs in their yard for Santa to see as he drove around. Prizes were awarded for the best signs. I forgot what the prizes were, but it was a great successful contest."

Jim Pitcock was a slim, lanky fellow, from the pictures we have of him.  He was "Ron Owens" during his tenure at KAAY, for those who are wondering.  I certainly hope his suit is cooler than my Santa suit- I'm comfortable only if it is in the mid-30s to lower 40s in mine!

THIS is something that brought in great reviews of the station- its unusual contests and promotions.  What with consolidation and ever-tight budgets, radio stations can only seem to make an appearance at a store opening and hand out a few T-shirts, etc. while blaring music piped in from the studio while on-site...certainly not the great quality stuff KAAY and other stations of yesteryear did.

Thanks to A.J. Lindsey for this fun picture- we could only hope we could have been there!  By the way, has anyone reading this post attended any of KAAY's Christmas In August promotions?