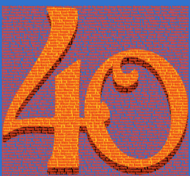 TO ALL MY KAAY FRIENDS...

Finally finished a month-long project The Complete History Of "The Breakfast Serial" for its 40th Anniversary (1973-2013)...my how time flies !

My friend, the late-George Jennings, began "The Breakfast Serial" as a Morning Feature that he used with Sonny Martin (Matt White) in 1969.

With George's blessings and help I took it into the Major Markets when I was at KSLQ-FM in St. Louis. That was in October of 1973.

I began National Syndication of the show in September of 1976, and in 2007 for my 40th Anniversary (and the Serial's 35th), I created a Website for it...and its now been heard in all 50 States and over 80 Countries ! (www.serial.thewwbc.net)

So, having been asked about it many, many times, I knew it was time to honor this special, long-running Morning Feature by filling everyone in on the "why" & "how" it all began.

It's long, it's detailed, it's truly "complete"...enjoy it as much as I have for the last 40 years ! http://www.jonnieking.net/gpage35.html

Wishing you all a wonderful, Happy Thanksgiving!

Tin Can Alley is on the airwaves!


Regular readers of this blog know that each week, Barry Mac prepares a fresh episode of his 70's oldies show, Tin Can Alley, for our enjoyment.   You can always find this week's episode in the right column, ready to go!  And if one hour's worth of 70's oldies bliss isn't enough, there
are over two years' worth of episodes at the T.C.A. archive at  http://archive.org/bookmarks/Barry%20Mac !

Now, we are pleased to announce that listeners in the Little Rock area can hear T.C.A. on the airwaves each Saturday morning!  According to Barry,

it's currently airing Saturday mornings on KEWI, 690 AM, out of Benton, AR, 8:00-9:00am.  Hopefully, it'll be on 103.3 FM in the next few weeks, as they're supposed to be getting onto that frequency as well.  But there's been some of that talk for awhile, so we'll wait and see.

Congratulations, Barry, on your move to the airwaves! 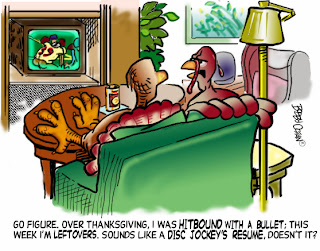 "I have been looking for this since the starting of the Thanksgiving season. This ... is what Mike McCormick a/k/a Jim Hankins called a "seasonal". It was a production element to set the stage for the season. Note this one runs 1 minute and 20 seconds. Jim wrote this and it aired as KAAY had been on the air barely 3 months. The voices are newsmen B.Bruce Jenkins and George J. Jennings."

Have a Happy and safe Thanksgiving, everyone!

Another gem here from the Wayne Moss Collection #2.  This is Wayne on a Moss Monday, July 19, 1971, a telescoped aircheck from 12:38 – 2:15pm with news/sports breaks from Mitch Michaels and Mary Donald.  There are a few missing sets and the newscasts weren’t fully recorded, but otherwise there’s a lot of show here.

This was recorded off-air and the first few minutes has a raspy sound because the station wasn’t tuned in on-center; the problem is corrected about 3:00 into the aircheck.

From the Wayne Moss Collection #2, here is a short untelescoped aircheck of O’Brian having fun in the nighttime from February 1974.  It's DX reception of KAAY but from where, there is no information.  I have filtered out much of the interference and background noise and smoothed out the levels from the signal fading so it’s more listenable.

Former KAAY deejay, and lately, 34 years with KSSN, Bob Robbins and his on-air partner Jennifer Trafford are making the move to The Wolf 105.1 KMJX on January 2, 2014:

It's refreshing to know that some of The Greats are still pumping out the hits, whatever genre.  Thanks to Doug Virden for the tip via facebook! 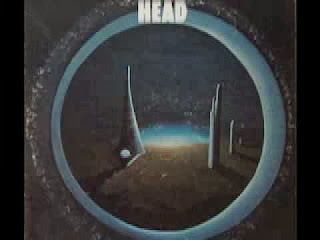 This is an update from a 2010 post about the famous trippy music bed used by Clyde Clifford (and his successors) underneath their raps on Beaker Street.  The URL links have changed, hence this update.

The music is from the 1970 album "Head" on Buddah Records, by the Los Angeles-based electronic musician known variously as Nic Raicevic, Nik Raicevic, or Nik Pascal.  Here is more information from Leonard Holyoke's excellent blogsite on 60's/70's psychedelic era music:

And, here is another writeup from Hippy.com:

Finally, a bit of info on Raicevic:


The bed is a crucial part of Beaker Street lore because the purpose was to mask the noise from the air circulation fans in the mighty 50,000 watt transmitter, located just a few feet from where Clyde was on-mic.  The bed is from the track 'Cannabis Sativa', which is 17:52 in length.  It sounds like Clyde took a segment of the track starting around 9:00 and looped a few minutes of it to create the spooky drone for Beaker Street.

The LP is long out of print and a collector's item.  This is from a reel-to-reel dub of the album I made in the 1970's.  It's in Stereo so put on your headphones and enjoy all the synth droning, channel to channel spatial effects, and just plain weirdness!

From the Wayne Moss Collection #2, this is Part 2 of Wayne’s show on the Big K on Wednesday May 19, 1971, with news from Mitch Michaels and Mary Donald.  1:55pm to 3:01pm, telescoped.  Reception was a bit staticy at some spots, I suspect from local electrical interference.  In other words, sounds just like real AM radio!

Just a note to let you know about the launch of The Spectrum Monitor, an electronic follow-on publication to Monitoring Times, which ceases publication with the December, 2013 issue. I hope you'll pass this along to all the folks at the KAAY blog. Thanks so much for your help! Best regards, Ken KS4ZR.

Folks, check out this link!!!

Thanks to Ken Reitz for this information!  Ken, we'll be looking forward to a quality publication to fill the gap Monitoring Times will leave as they cease publication in December.... 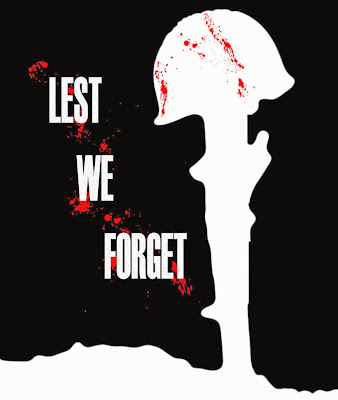 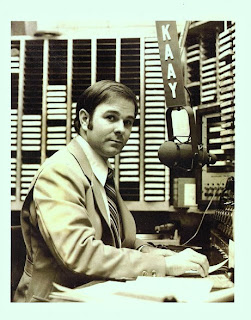 Back in 2011, former PD Wayne Moss sent us a bunch of aircheck tapes, which we posted during 2012 and earlier this year.  Now, much to our surprise, he has dug up ANOTHER set of aircheck cassettes and has graciously shared them with Bud & the rest of us here at the Blog!  After putting these tapes through some case-cracking, editing and audio cleanup – Presto!  We have another set of great shows for you from the 1971 thru 1974 period of KAAY – 3 airchecks of Wayne, 1 of O’Brien, and a special aircheck of Bob Robbins.

To start things off here is Wayne Moss on Wednesday afternoon May 19, 1971.  This is part 1, a telescoped aircheck from 12:30pm to 1:45pm, including George Jennings in the Cash Cruiser and news from Mitch Michaels.  You’ll hear some “Sock it to ‘em” liners, I figure this must have been during the time when the “Rowan & Martin’s Laugh-In” show had made the phrase so popular.

One of music's most influential artists, Lou Reed, passed on into Rock & Roll heaven on October 27:

If you remember the Velvet Underground, you go 'WAY back.