Jonnie told me many times that, with his other ventures, he was greatly blessed to rub elbows with other Greats- this one being George Barris, the "Car Guy" who made the Batmobile, the Munster cars" and others a reality.  In Jonnie's words, regarding George Barris: 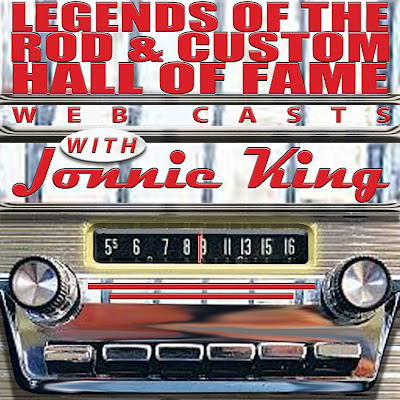 "I have finished-up a Special Tribute Page for George Barris, and it contains TWELVE of the BEST Interviews that we did between 2006 & 2014.  George's memory banks were always spot-on talking about any of the ground-breaking rides that he & Sam built.
To make it easy to access these historic builds,  I've listed ALL 12 stories on the Page with a synopsis of each.  And, they can be accessed by clicking-on the Link for each story.

Here's the direct Link...and feel free  to put it on your FaceBook page & to pass-it-onto anyone you think might enjoy it:  http://www.legends.thewwbc.net/gpage146.html

Again, sincere thanks...George Barris was truly "The King Of The Kustomizers". 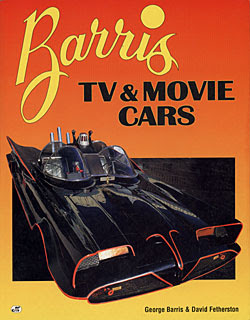 Thank you Jonnie!  I hope everyone enjoys the links, etc.  My respects to the Barris family for their loss, may his imagination and creativity live forever!

...one of the bleakest periods in our modern history.  A. J. Lindsey posted about the assassination of John F. Kennedy:

I've got to go through them, but there are some important links on his original post; the KAAY tapes involving the news broadcast were lost, as well as the two-hour documentary Jim Pitcock and staff put together....

Other stations thought that, since George J. Jennings just happened to be in Dallas for vacation, that KAAY had actually sent him to cover the news!  This made KAAY gigantic in their eyes!

I don't remember the actual news about the assassination, but I do remember the funeral procession on TV... I remember asking my mother why everyone was so sad...she shushed me and left me in front of the black & white console TV...this is what I remember, someone posted it on YouTube:

Folks, here are a couple of links; one in which A. J. Lindsey presented the Thanksgiving 19632 "seasonal", but his link is broken, so the second link provides the link:

I know it's a bit early, but we have a special, historic post for the day before Thanksgiving...Happy Thanksgiving, everyone!

Doug is a faithful contributor to the blog- and he sent along some rare treats for all to enjoy!

"Got this from Ad Craft of Arkansas.  I was contacted by them and was told about some old KAAY items.   I was told this logo started being used in 1976 when Multimedia took over and was used through the reminder of the 70's." 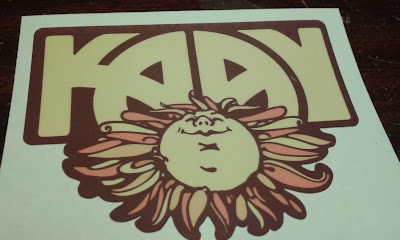 "Ordered this one several years ago off a website that had old vintage radio station logos.  I believe this one was used around the late 60's to early 70's." 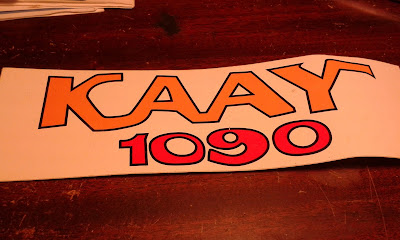 In November 1966, "Beaker Street" was born.  No one seems to remember the exact date, but many remember the great music "Clyde Clifford" brought to the airwaves.  This, from Richard Robinson's doctoral dissertation.  Richard had given us permission to post this on December 30, 2009:

"Consider this:  In November 1966, eerie music and strange sound effects filled the airwaves of KAAY, AM 1090 in Little Rock.  Over these program elements, a slow deep voice says slowly, “Music of Iron Butterfly.  It’s 12:01 and I’m Clyde Clifford, and this is KAAY, Little Rock, with Beaker Street until 2:00 a.m. this morning, Beaker Theatre at 2:00.”  This was the voice and sounds of underground radio in its infancy, from Little Rock, Arkansas and beyond."

Thank you, Richard!  Thanks also to "Clyde" and Beaker Street!

"On November 1, 1976, we moved to the new studios at
2400 Cottondale Lane. The Riverdale section of town is
now thriving and crowded, home to Alltel world
headquarters among other notable businesses. In 1976,
it was regarded as swamp land and Pat Walsh caught a
great deal of grief from his peers about his decision
to move the station there. As usual, Walsh had the
last laugh.

There was a certain "magic" about KAAY; it was a
living, breathing entity--apart and complete unto
itself *without* the human beings who made it run. For
the past thirty years, I have been convinced that the
magic did NOT make the move with us from 1425 West 7th
Street to 2400 Cottondale.

It would take the clueless Multimedia almost the next
ten years to run KAAY completely into the ground, but
the Final Approach began on November 1, 1976."

Here's the Cottondale location as it appeared in 2012, when Jerry Sims drove me around town: 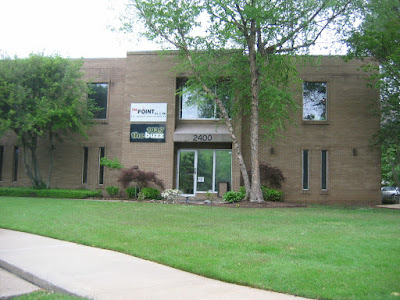 A. J. Lindsey was the second "Doc Holiday", David B. Treadway was the last.