He was the last Buddy Karr on KAAY. He had been in radio for seven years, even though he died at age 21. He was Richard Wiethan. He was my good friend.

Richard was just 14 years old when he started his first regular shift on the radio. It probably helped that his dad owned the radio station in Malden, Missouri. Even though I never got to hear an air check of the teenager, I would bet that he was pretty good, and was showing that confidence that, I assure you, he had at KAAY.

There were lots of guys around the country on the radio who wanted to work at KAAY back then. A 50.000 watt radio station with an awesome signal that reached a big chunk of the nation, and even several foreign countries. Richard got the opportunity, and worked part time for a while filling in for various D.J.'s. We became good friends and hung out after hours a lot. Since there was not a regular D.J. shift available at the time, he decided to go work at WMPS in Memphis (not too shabby....can you say Elvis?), as a newsman. We kept in touch on a regular basis, both hoping that when something became available, Richard could come running. It wasn't a D.J. shift, but a news opening that came up first. He came back to KAAY as a newsman (I can't remember his news name). Soon Bob Mullins (Buddy Karr #2) left and Richard wanted to move in. I remember, he was not anxious to tell the News Director (Bruce Jenkins), about the move. Bruce had given him the news opportunity, and Richard told me he was not too excited about losing him so soon.

An air check of mine (Sonny Martin) from August of 1966, which was posted here a while back, has a promo of Richard announcing the premier of the new Buddy Karr Program. He started his Buddy Karr fun that week. It lasted until August of 1967.

I have written many good things about working with great people at KAAY. It was an awesome experience, and I made many great friends. However I can only think of one negative thing to say about my time there. It centers around what I thought was a bad decision on their part. They allowed Richard (and Buddy Karr) to simply vanish. Richard was a part of his National Guard unit back in Missouri. He had to return each month for drill, etc. In August of 1967 he went with his unit for summer camp in Minnesota. There he was involved in an accident that took his life. Knowing we were good friends, the station called me with the news. I was then working in Little Rock television. I wondered how they would handle the news on the air. They handled it by not doing anything. Just kept on Rockin 'n Rollin'. I thought it was a big story for the stations listeners, and I called my friends there to question their handling of it. I don't know if they did not want to explain the "Buddy is really Richard" thing or if they simply were off guard and did not know what to do. Since the accident happened in Minnesota, and the employer didn't report it, it was left generally unreported. I thought my friend's memory deserved better. Ron Owens (Newsman Walt Sadler) did call me later to tell me that the station would retire the Buddy Karr name. I always felt that it was partially for my benefit.

Richard had a great voice, loved working at KAAY, and was a good friend. He was married just a few weeks before his death to his high school sweetheart. I attended his funeral in Malden, Missouri. Five months later I had a son. My wife and I decided to name him Michael Richard. 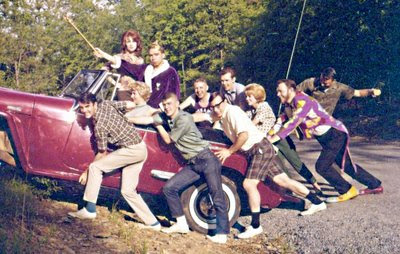