I had the honor and privilege to have a picture taken with Mr. Phillip Jonsson, owner of Signal Media radio stations. The stations consist of The Point 94.1,103.7 The Buzz, and 106.7 The Ride.  These radio stations are located at the former home of KAAY at 2400 Cottondale Lane.  He told me he wanted to buy KAAY but couldn't since he already owned AM 1010 KLRA at the time.  In those days an owner could only own one AM and FM.  And he was trying to sell KLRA before the sale officially went through.

I also remember reading on the blog that Larry Duke from Jonesboro wanted to buy KAAY when it went up for sale in the mid 80's.  Duke was under the impression he had the deal to buy KAAY from Multi Media from what I read.  If one of these guys could have bought KAAY, it more than likely would have stayed out of the hands of corporate radio.

Mr Jonsson also used to own KRLD AM 1080 in Dallas and his grandfather was the founder of Texas Instruments.  Phillip Jonsson is now in his early 90's and still comes to the stations about once or twice a week.  His son Steve is the GM of the stations and runs a lot of the day to day operations.  The Point 94.1 came in 2nd during the last ratings period.  These stations are among the last of the locally owned stations in Little Rock.

The picture of me and Phillip Jonsson was taken in the ballroom of the Arkansas Governors Mansion where 103 7 The Buzz was hosting the Pigskin Preview for the upcoming football season.

Ten years later Westinghouse which owns AM 1010 WINS in NY bought AM 1010 in Little Rock and took it off the air. If that offer were made 10 years earlier it would have left Phillip Jonsson to by KAAY. 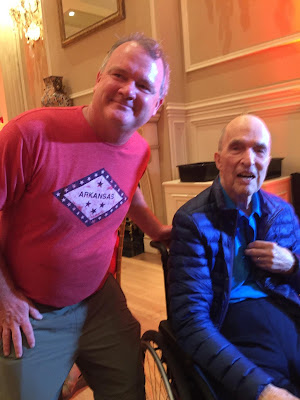 Thank you, Doug, for your picture and information!  Bud S. (staceys4@hotmail.com)
Posted by   at 3:42 AM