...to our understanding of how KAAY worked!  In his own words:

"I went through more folders and found a few things. Many of the memos and pages in these folders aren’t too interesting. Enclosed are a few attachments that kind of add some color to the everyday workload at the Mighty 1090. Feel free to use any of them. And yes, I am still looking for more, too.

First of all there is a “1981 KAAY music memo” from our PD Steve Kelly. These are the kinds of memos he sent out frequently. The man was always tinkering and making moves. I learned a lot from him. Enjoyed working under him – very much. 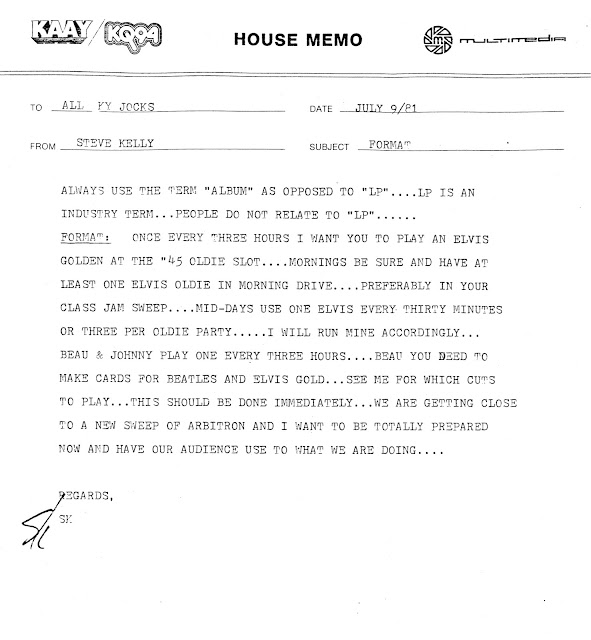 Secondly, attached is a KAAY 1978 FCC required signature list. It actually ran on thru 1979 when I signed it. These are real names and so no “on-air names” appear on it. I was told this was required by the FCC in case they wanted to match log signatures. That is, if any questions came up over who was working when any transmitting problems occurred. True? I don’t know. But it was kept at the reading site.
(Signature list removed, due to possible legal ramifications. BS)

Third, here is a copy of the station sheet listing all of The Beatles songs in order during our Beatles scramble contest. The songs were all meshed-up in very brief segments and the first caller to name them in order won some big Beatles prize during a ‘’Beatles Weekend.’’ 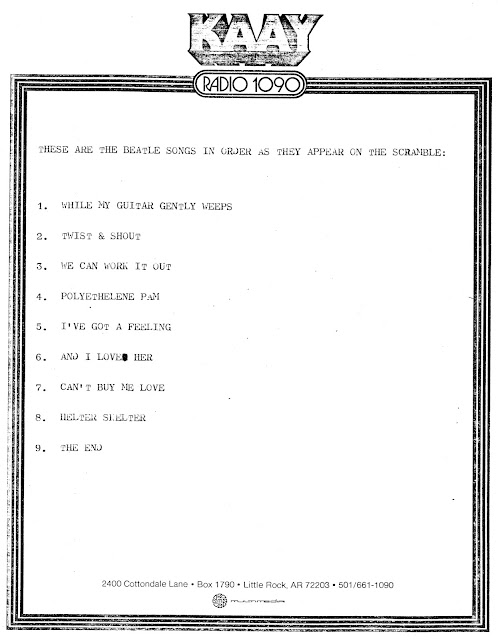 Next is my hand written list of songs played on KAAY during the “Sixties at 6” on June 28, 1981. We kept these so we wouldn’t play the same songs over and over. It was a great show – totally free form taking any requests. We used a lot of vinyl and some carts. The LP was for album, CT for cart, and 45 for – well, you know. Rather basic. I recall bringing a few albums from home since I had, and still have, a nice sized music collection. Of course, I had to clear any songs played with our PD, Steve Kelly. I very much enjoyed doing special shows like this all thru my radio years. 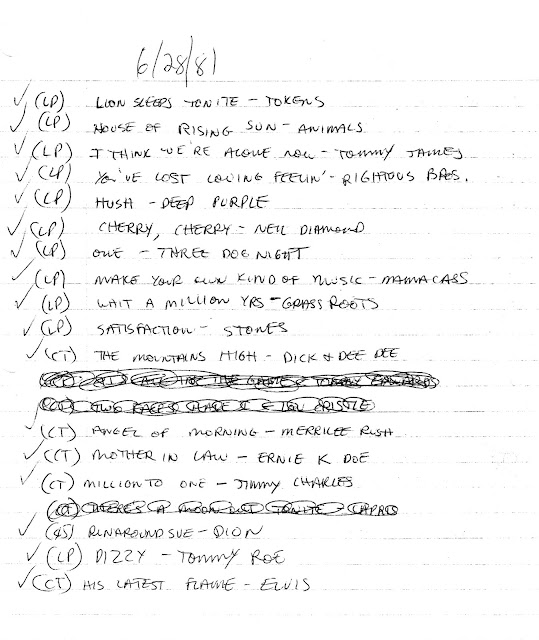 And next is a 1982 KAAY memo from our PD. All these years later after going thru a folder of similar memos I can’t help but chuckle. Man, there was no feeling like being the only one in the building late at night, guiding The Mothership, the 50,000 Watt Mono Monster of the South. What a rush! The control board at your fingertips. Broadcasting to over 23 states, Central America, Canada and out into the Caribbean. It was a dream come true. I would often just sit there, turn out all the lights in the control room with just the glow of the twinkling machinery – and CRANK IT UP! Of course! 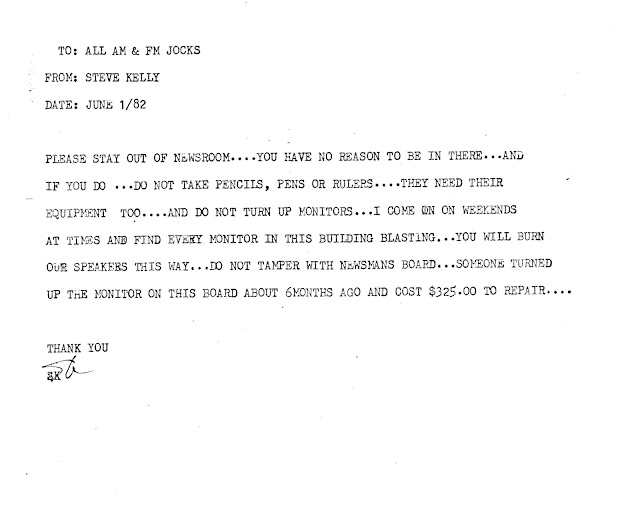 Mentioning the power of the airwaves, the next attachment is a letter I received from an inmate at The Tucker Unit (Arkansas State Prison.) There was a brief time when KAAY did some overnight weekend simulcasting with KLPQ-FM. Q94 ran a program at midnight called ‘’The Midnight Snack’’ (I think Mark Wallace came up with it) and it featured a classic rock album. Since this went out on KAAY as well, you could say this was a slight nod to the Beaker Street days. Very Slight. Anyway, the letter is self-explanatory. 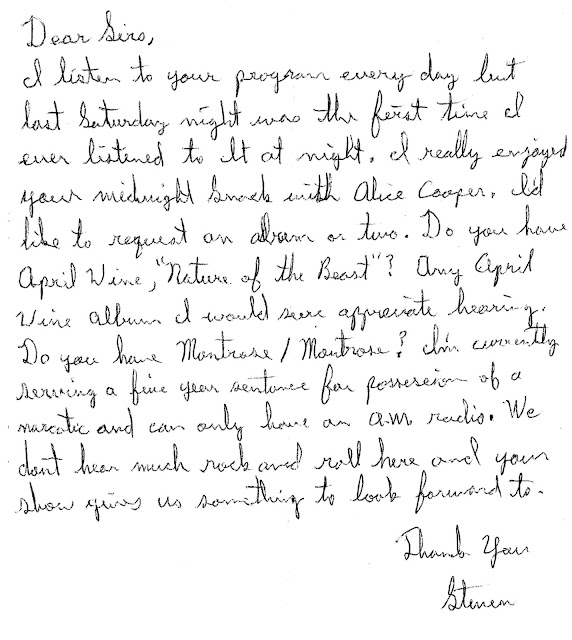 Just a note – I have always been a music freak. I love it. It remains a big part of my everyday life. That is how I became interested in radio – it was a tool to get music to the people. I relished sitting at the board and segue between two songs, or a song – jingle - and song. I always did in manually over riding any cue tones. Man, nothing better than hitting a tight, smooth segue. And that was what I was most proud of during my radio days.


If I can do anything for you, please let me know. Once again, keep up the great work and take care.

Eric, you don't know how much you have pleased us, having let us take a peek at the inside of KAAY!  There was- and always is- a lot of work behind the mic- and in production, news, sales, etc., so it's NOT just all a deejay and a stack of wax!  Thank you for being "there"- and, rest assured, I'll keep asking, so keep on digging and sending us more stuff to ogle!