Eric Thomas In The Control Room, And More

Folks, Eric has been VERY gracious to share things out of his personal file- and his personal life- for the posterity of the blog.  We, as fans of KAAY, have always wondered what it's like behind the scenes.  Quite often, the comments have been that a deejay's life is not glamorous, no matter our imaginations....

Nonetheless, I have always been a "nuts-n-bolts" guy and love digging through things, seeing how they work.  Eric has once again sent some pictures and files for us to enjoy!

The first, is of Eric in the studio during the summer of 1981: 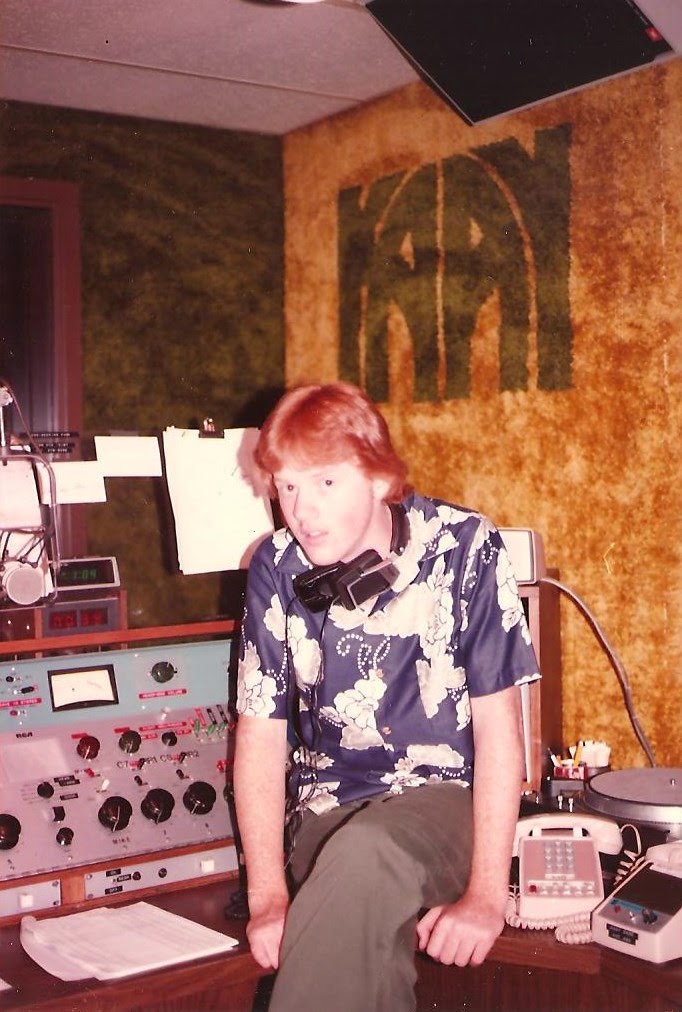 ...and Eric today with his lovely 5-year-old daughter: 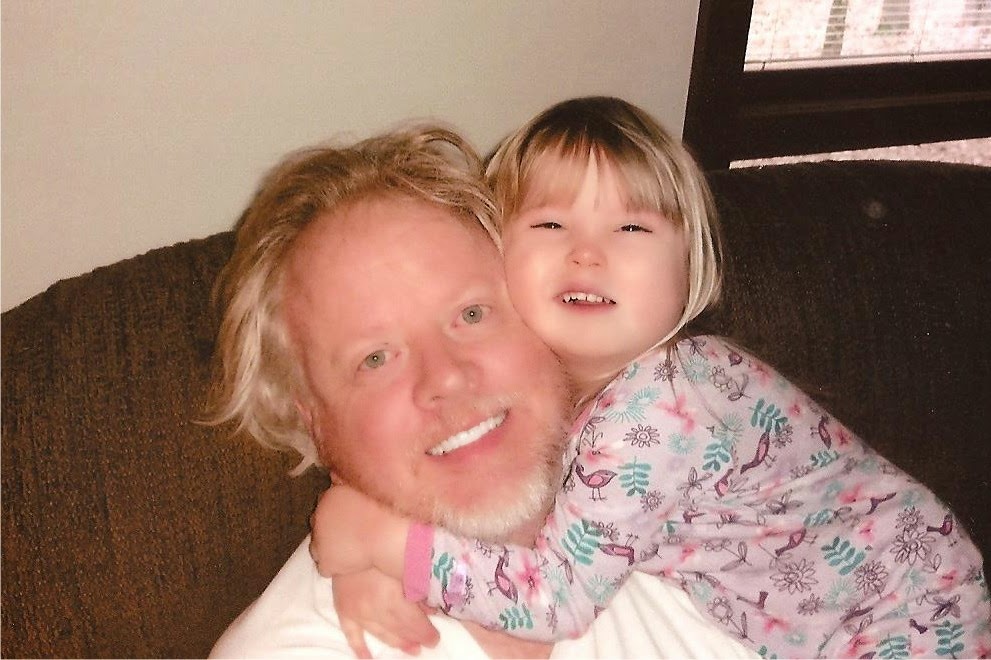 "Ah, before digital photography! Also attached is a picture of the control room circa 1981. I guess you guys have seen it with the shag carpet on the walls and the cut out shag KAAY logo? I had to bend my head down to get the logo in the picture - a true face for radio! But I do have my cans around my neck with the plug in my back pocket a la Larry LuJack, haha! This was the control room as it was from when the building opened in the ‘70’s until the early-mid 1980’s. Looking at the picture just to the right and out of the photo was the big picture window looking out from the 2nd floor toward the Arkansas River. In fact, the river was probably less than 100 yards from the building. In between was the parking lot, a levee and then the river. Several times during the late night hours a big barge would be going up or down the river and shine it’s bright search light right through the control room window. That always deserved a wave.  I wonder if those guys were listening to the station? 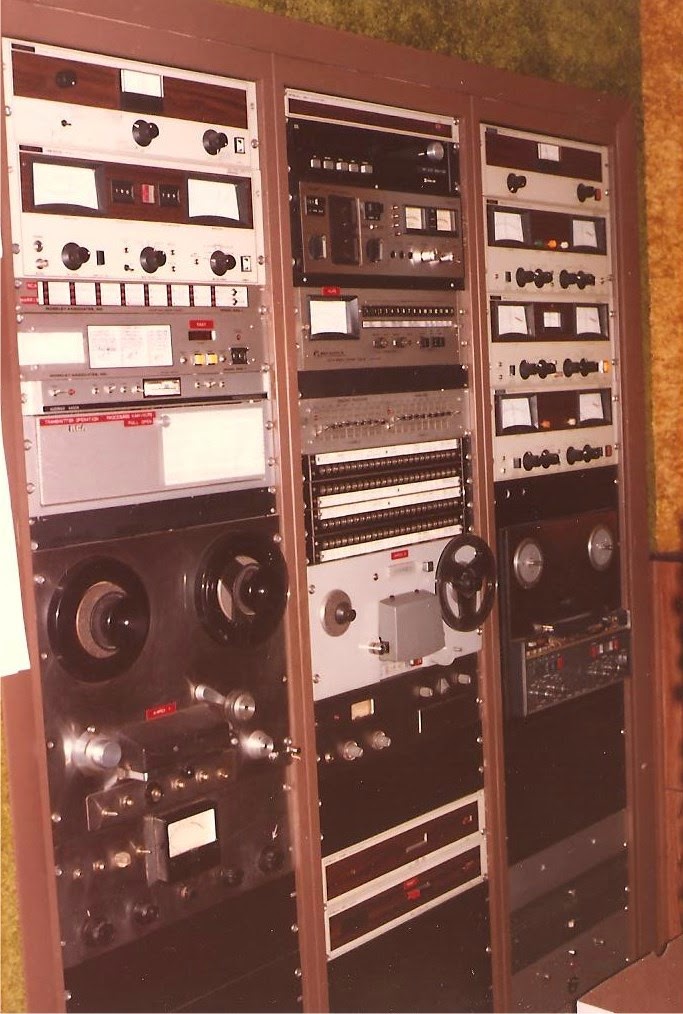 The other photo is of the control room rack that was to our backs in the studio. The nerve center!

(Speaking of the building back then, just recalling the little things, the men and women’s bathroom signs on the 2nd floor read “Elton’s” and “Olivia Newton’s.” Classic 1970’s radio humor.)

Eric also sent along a 9-page manual of the KAAY Procedures Manual; some may or may not appreciate this, but I hope you do! 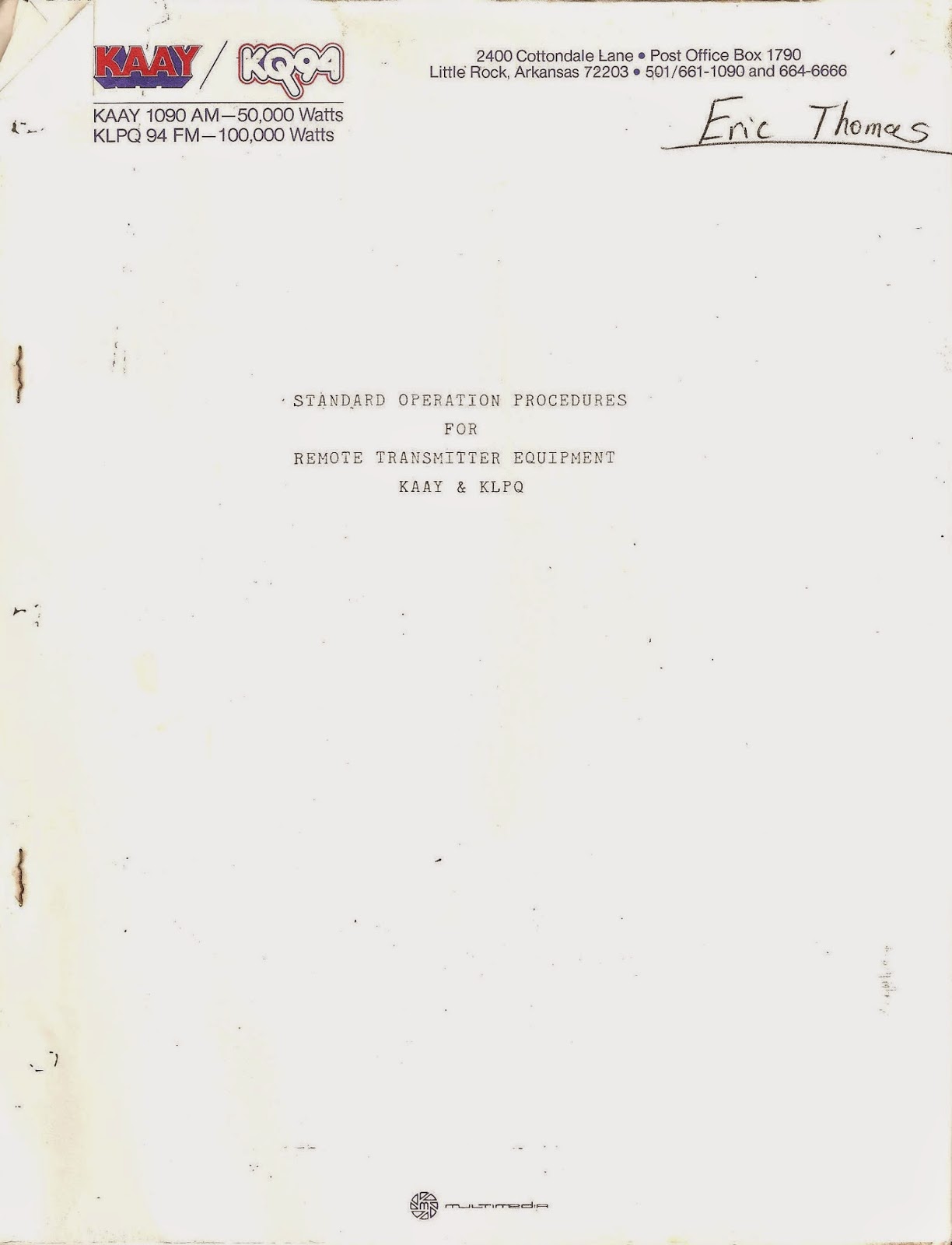 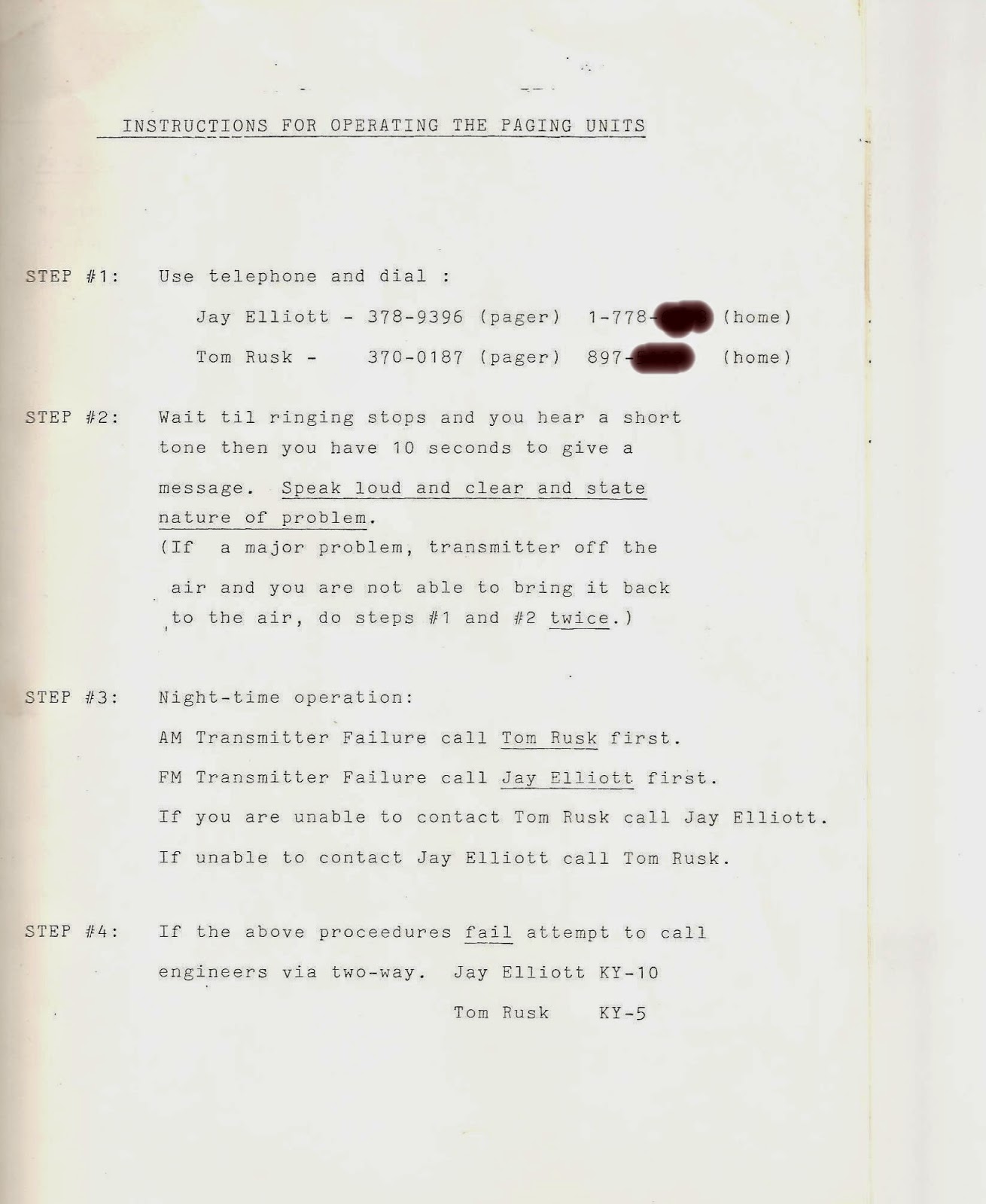 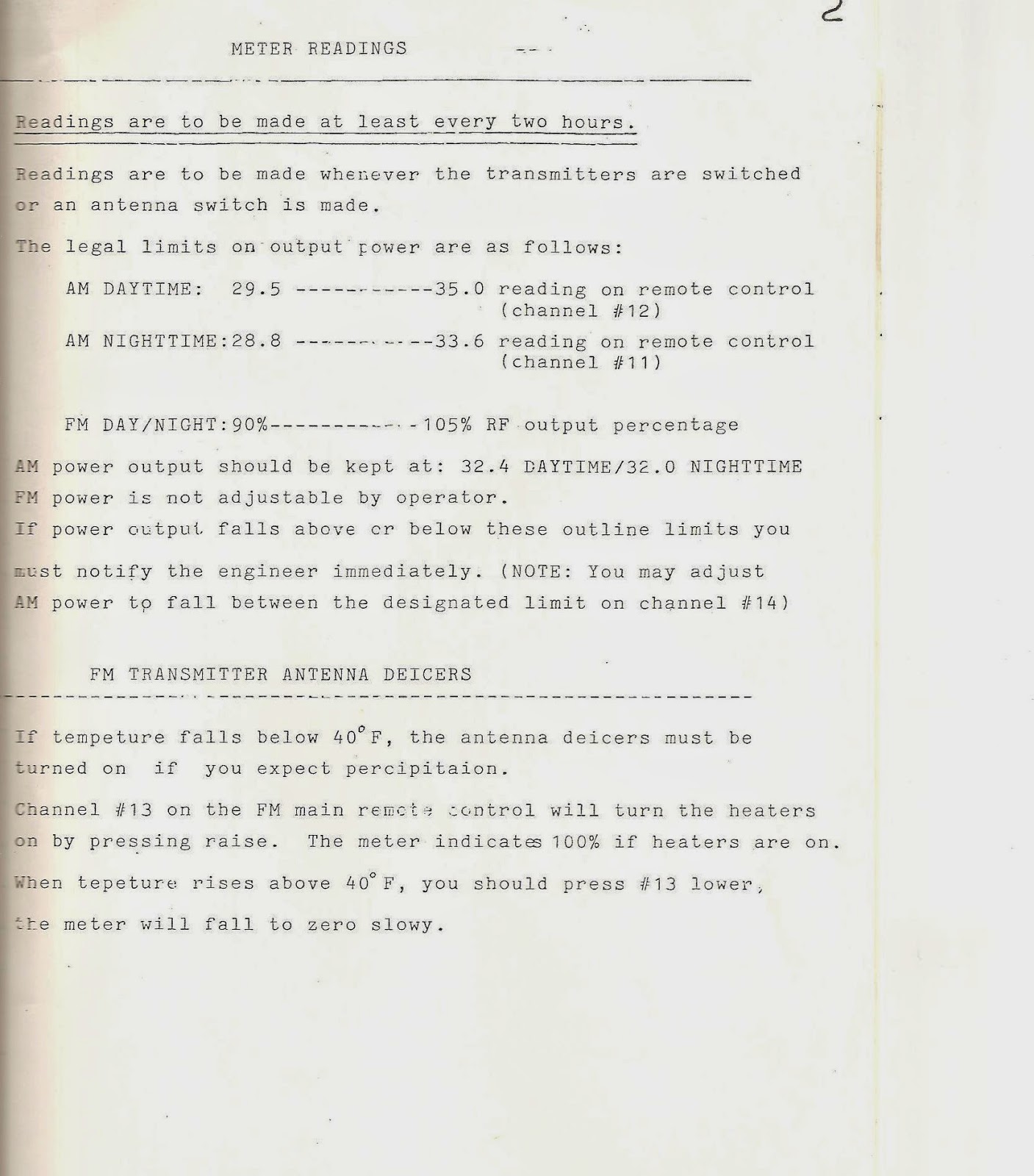 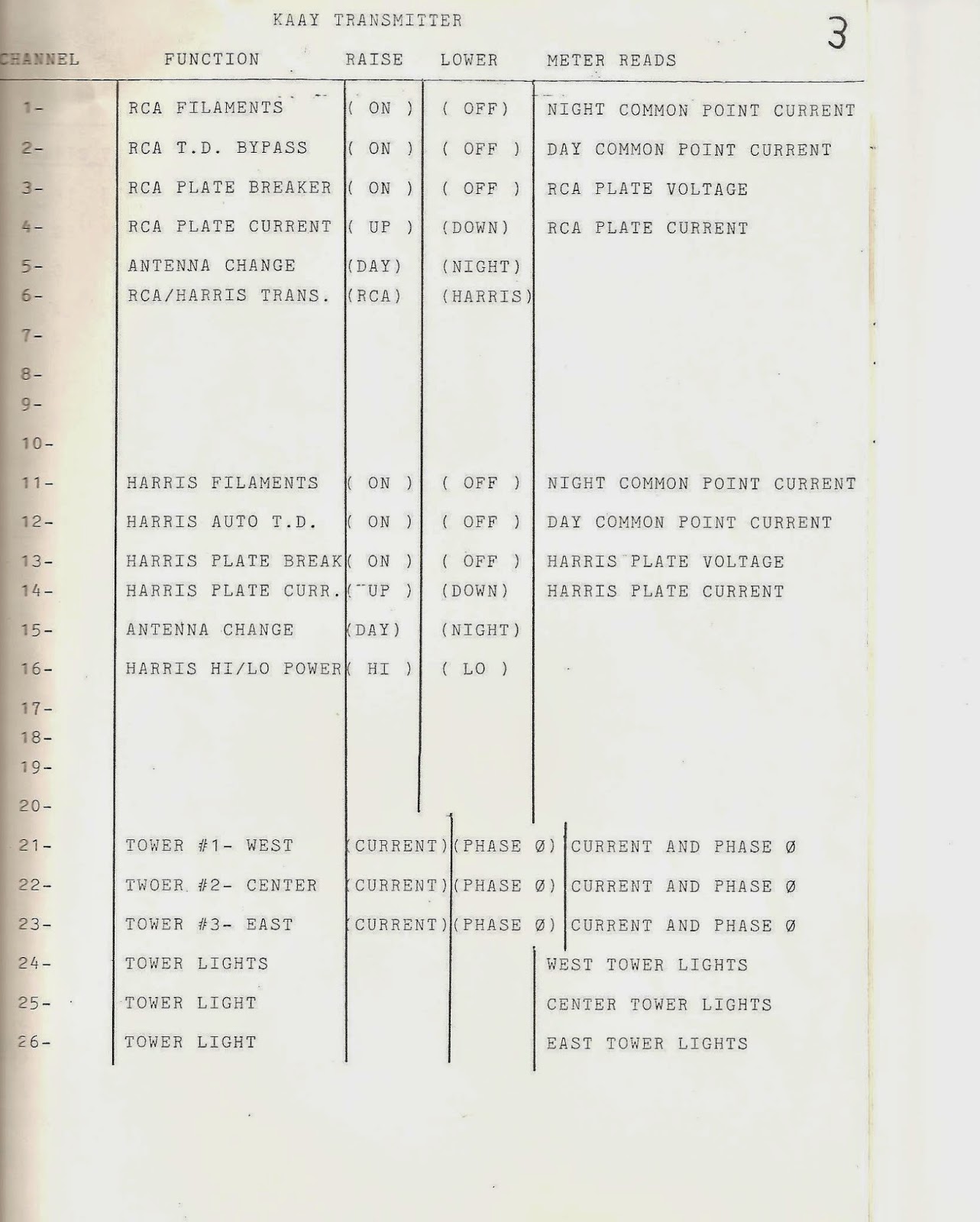 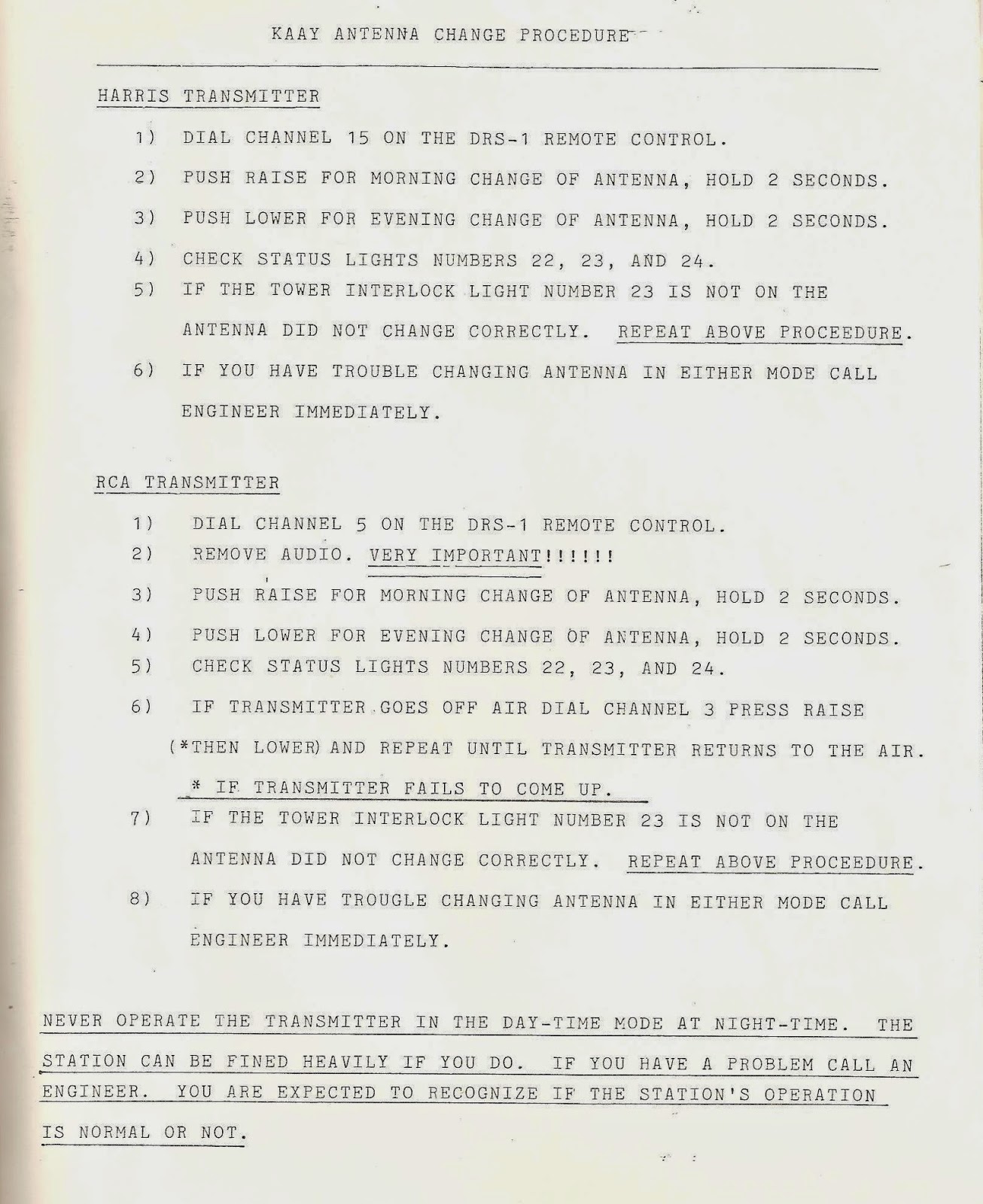 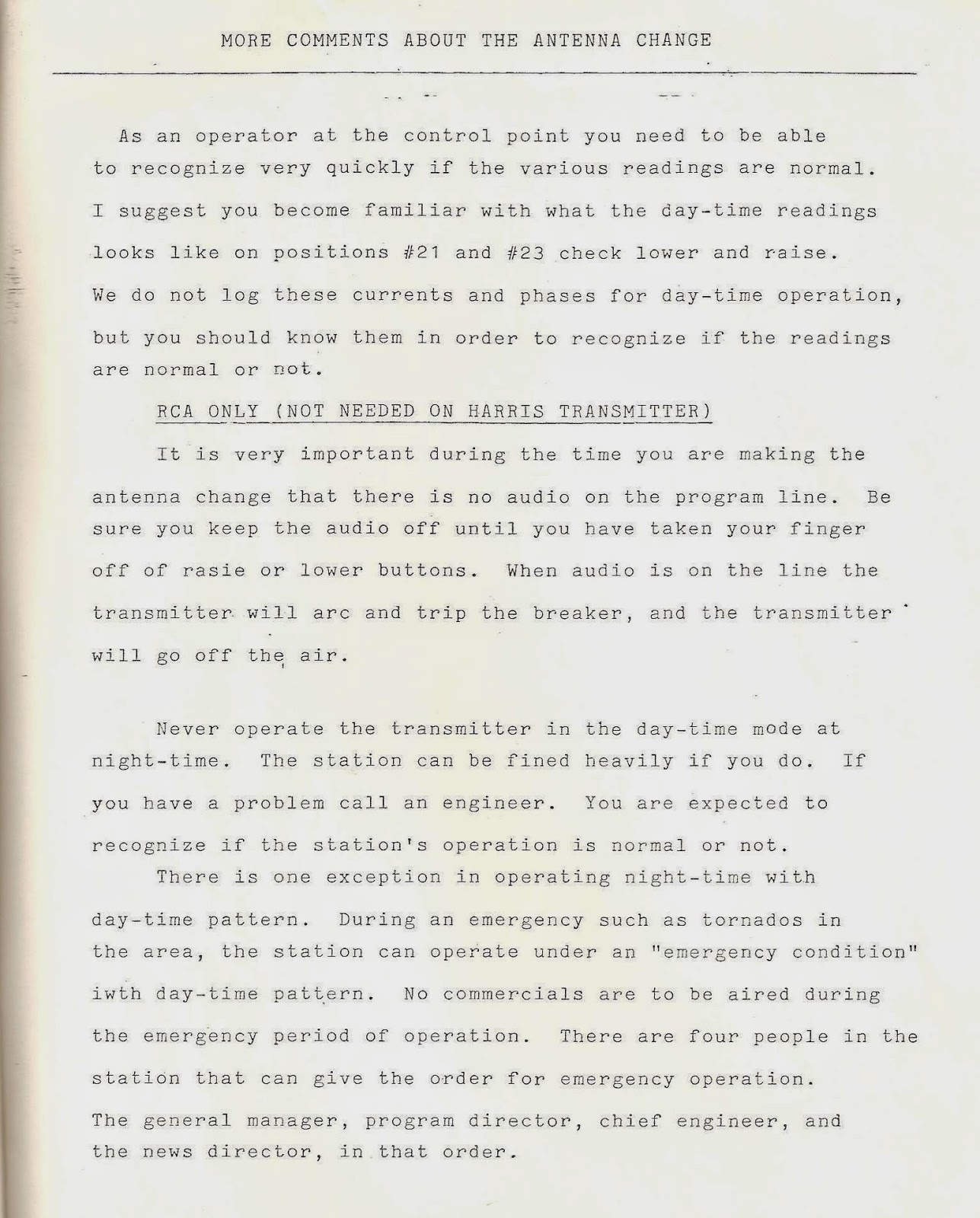 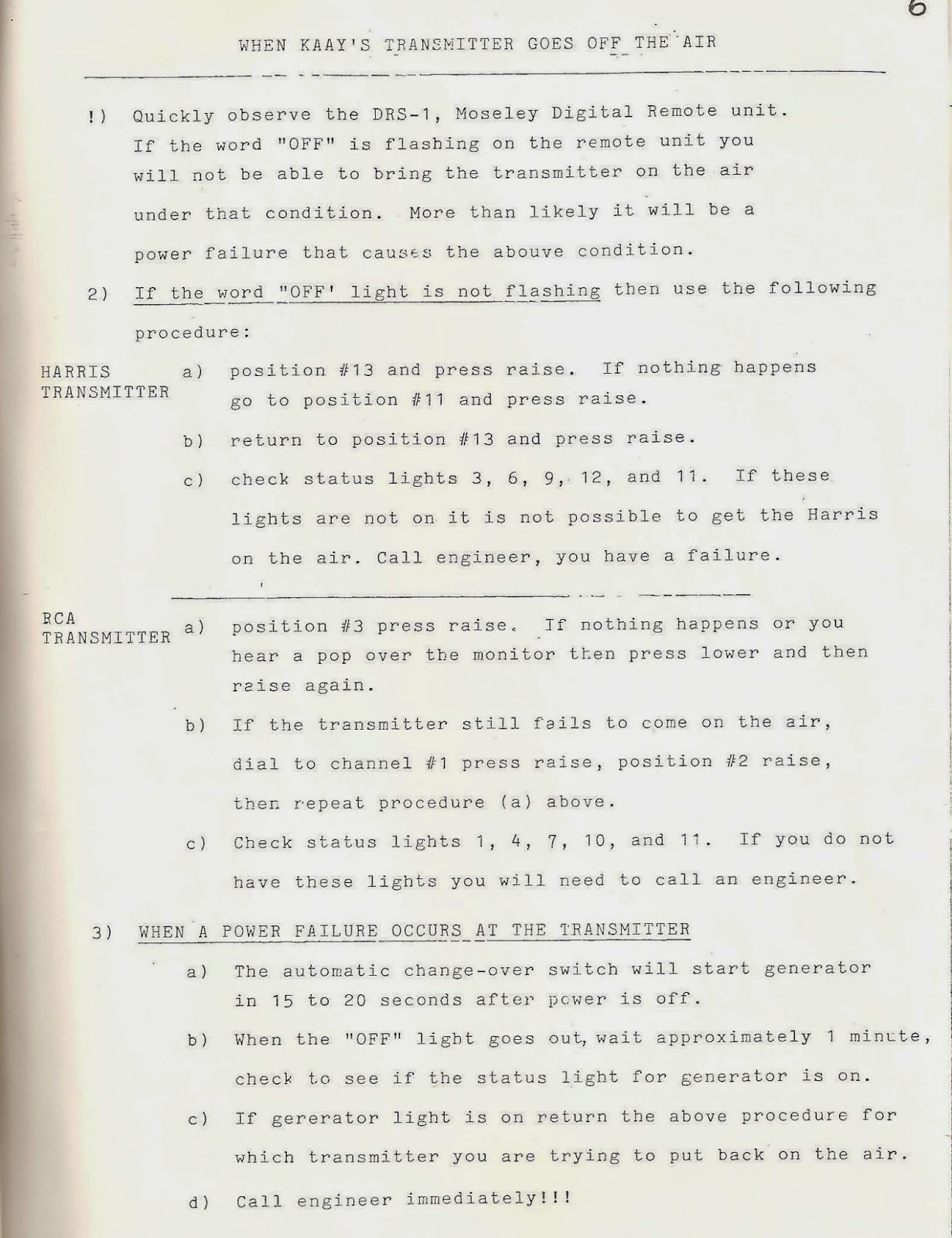 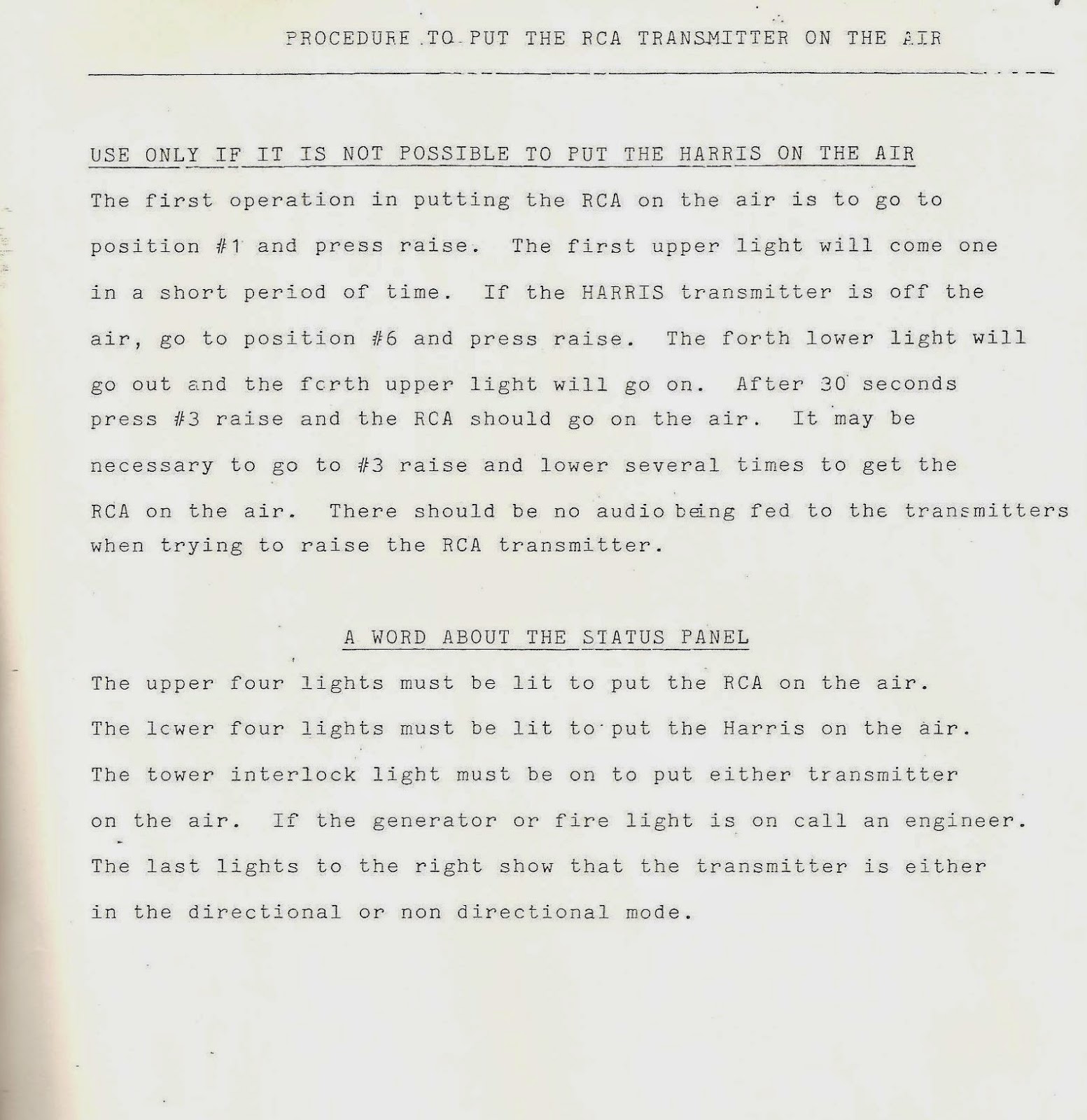 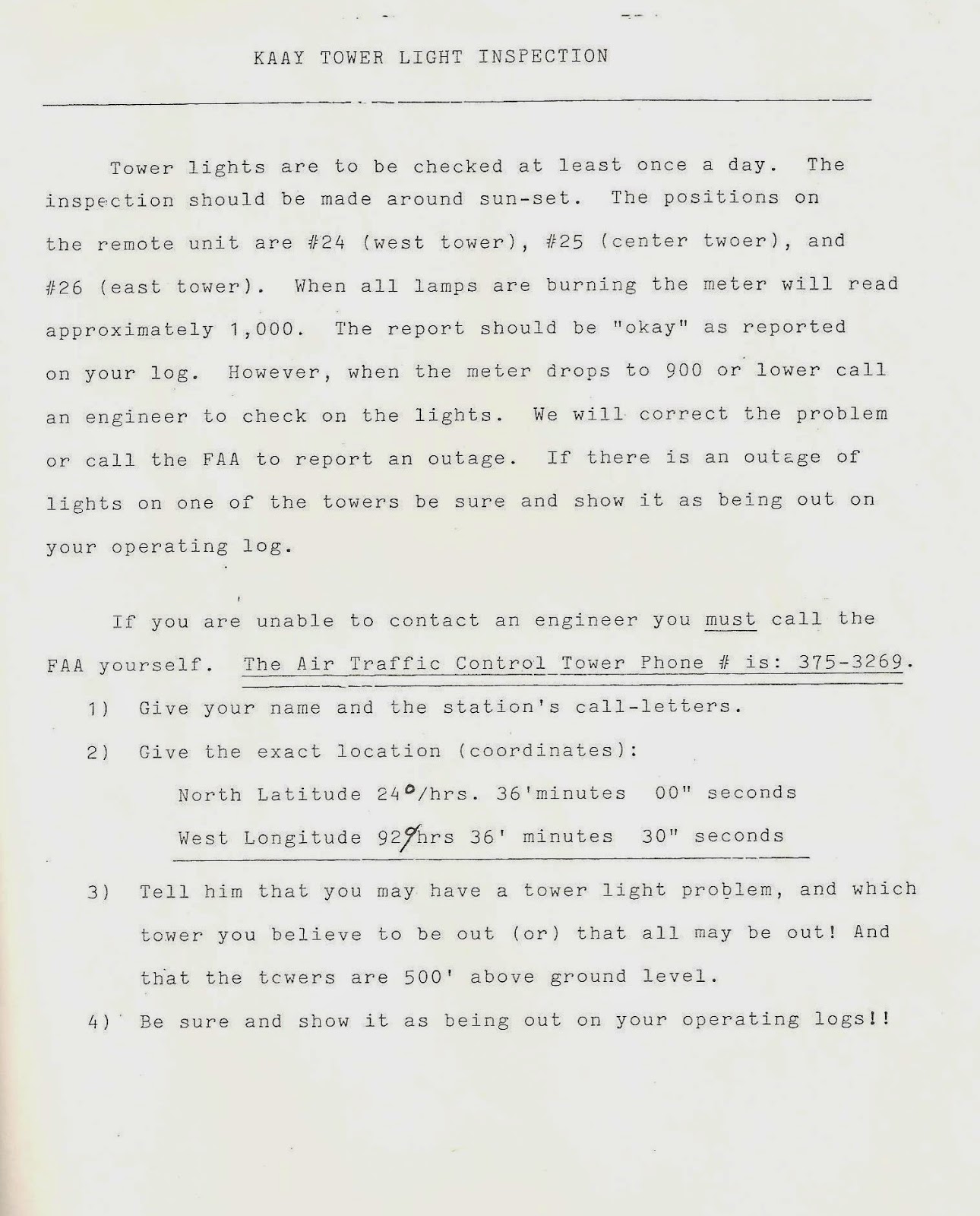 Thanks, Eric!  What great material!  Don't you folks agree?