Occasionally non-KAAY-related articles appear on this blog, and here's one of them.

The recent demise of Clyde Clifford's Beaker Street on KKPT brought to my mind my years of listening to John Peel on BBC Radio 1.  And I remembered I had some recordings....

Here's some background and some connections.

The background:  from 1979 to 1983, I lived abroad, in Denmark and Britain, doing student things.  Late in the evenings, BBC 1 came in loud and clear in Aarhus, Denmark, where I lived in my student dorm.  After 10pm on Mondays to Thursdays, I'd tune in to the BBC on "medium wave" (AM), as they called it, to hear this slightly off-kilter, witty DJ named John Peel play music one could not hear anywhere else on the airwaves, let alone anywhere else on Planet Earth.   Peel was a legend in British radio, having been born in Britain, done DJ work at KOMA in Oklahoma City (!), recruited back to the pirate radio station, Radio London, on a ship in the North Sea, and eventually hired to do the night shift at Radio 1, where he was allowed to play whatever he wanted, just so the show kept going till the next shift.

The connections: Does this sound a little bit like someone named Clyde somewhere in Arkansas?  For sure.  Having heard Clyde in 1969-72, I found Peel to be right up my alley.  John Peel would play almost anything: R&B, rockabilly, country blues, swing, reggae, punk, tuneless stuff  --- anything (but not bop or post-bop jazz, not classical, and surely not Top 40.  Oh well --- I guess no one likes everything!).  People from round the world mailed him their records, and he tried to play as many as possible, if only because of his dislike of the commercialized nature of popular music in Britain.

There's no way I can properly tell Peel's biography here, but there is an informative summary at this Wikipedia page:

In 1983, I realized that I should tape a few of Peel's shows, if only to remember his incredible monologues between the songs.  I threw the cassettes in a box, and didn't think about them for years....

Until last week Sunday.  No Clyde Clifford to listen to --- what now? I found the shoebox, and there were a pile of cassettes in there.  They played, not at all badly.  I've salvaged what I found, and I've uploaded them to a Podomatic account.   (My wife's out of town this week; I can do these things without guilt!)  These aren't meant to be a substitute for Beaker Street (it's apples versus oranges, here), but they sure are unique.

These shows were broadcast between 1983 and 1985, when Peel was playing post-punk and reggae.  This is what you'll hear.  There's also a terribly recorded segment from Peel's Festive Fifty broadcast at the very end of 1979; it's glorious "high punk", including Peel's favorite tune, "Teenage Kicks" by the Undertones.   But if you want just a sample, listen to one of the 1983 recordings.

Here's the link to the recordings:

And here's a montage of John Peel from start to finish: 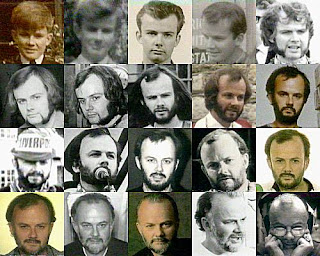 P.S.  There is an excellent clip of Peel doing a 1967 Radio London broadcast, at
http://thephoenix.com/BLOGS/onthedownload/archive/2009/11/13/john-peel-pirate-radio-broadcast-from-1967-mp3.aspx     Real flower power here....

Also, there is a good John-Peel-tribute blog at   http://fadesinslowly.blogspot.com/.    There are a number of audio clips of Peel shows at this blog to download.  The downloads are tedious (ads and malware to dodge), but I lifted a segment of a show from 29 August 1977, which reflects Peel's daring and verve to play punk rock on the hallowed BBC at a time when radio management were actively trying to kill the genre.  Whether you like the stuff or not (I do), you gotta admire Peel for risking his job to serve his audience.