My Trip To Little Rock: Monday With Charlie ("King") Scarbrough

After so many years of fantasizing as a kid, then wondering as an adult, then getting verbally kicked in the keester by Jerry Sims, I finally made it!  There were a couple of false starts, where we had "catastrophic failures" on vehicles- you know, those "little things" that eat up money- that took much of my travel stash, but we perservered and finally made the trip the week of April 18-22, 2011.  Travelling Sunday night, we arrived, as we viewed the Little Rock skyline, at our hotel at 4:30AM.  The staff immediately put us in our room (we didn't have to wait until 3:30 PM as originally quoted!), took a nap, then woke up to meet Charlie Scarbrough ("Charlie King", 1967-1969) for lunch and a bit of a tour.

Charlie came to our motel and picked us up.  What a thrill to meet another one of The Greats!  My wife and daughter and I enjoyed meeting Charlie so much, we wasted some time in the foyer just talking.  Being sleep-deprived and hungry didn't matter to us at the moment....

Upon getting into Charlie's vehicle, he presented us with a bowling shirt!  Seems as if Pat Walsh had sponsored a bowling team, something that I never knew or that no one had ever mentioned.  It's in wonderful shape and appears to have been hand-embroidered, with "Charlie" over the left breast and "Scarbrough" on the left shoulder, with "KAAY 1090" stitched in the middle of the back.  Here's my wife and daughter showing off the back (actually when we were at the Butler Center for Arkansas Studies, later): 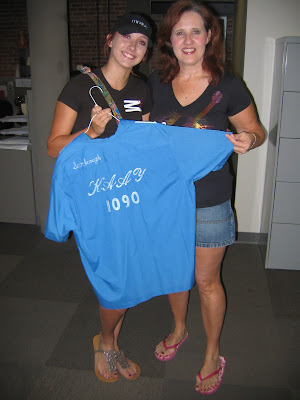 And a picture of the front: 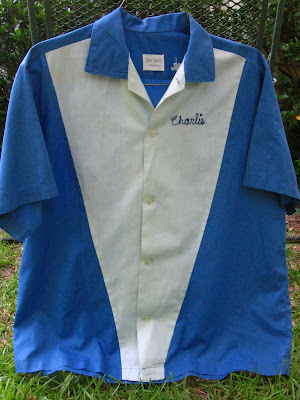 Charlie took us all over Little Rock, showing us the capital, where tax protesters were picketing, as well as where the old W. 7 Street studio used to be (more later).  There was lots to see, as well.

At lunch, Charlie was visited by a fan who recognized his voice; seems as if the fellow's brother worked with Charlie at another radio station years ago...small world!  After lunch, we were headed off to do something for the ladies, when we were coming up where Dale Seidenschwarz ("Clyde Clifford", 1966-1972) worked at U. of Akansas for Medical Studies.  I asked if I could do a "cold call" and we whipped right in.  After being led to the Media area of the hospital, the receptionist for the area called down to Dale and announced my arrival, after which she showed me to Dale's office.  I was about to hit the ceiling, I was so excited...and I'd realized I'd left the camera in the car!  Dale said to go get it, he'd take pictures with me and, after getting a little disoriented with my surroundings, I got back to his office.  The same lady who showed me in took the pictures...in the first one, we were just talking away as she snapped the picture: 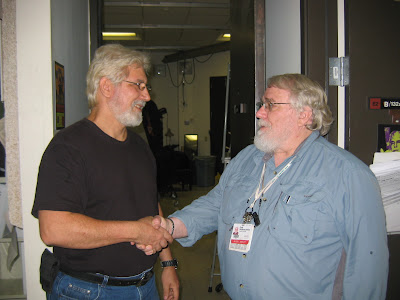 ...and we finally posed for another photo: 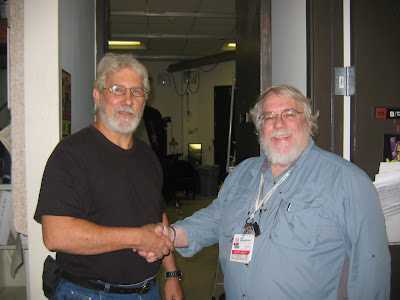 Another Great, a legend all over the world, Dale took a few more moments with me, offering information about Beaker Street and KAAY.  One other thing I didn't know was that he told me the feedline to the towers at the transmitter site had been vandalized recently for copper...the station was off the air for a few days while they got it replaced.  What a shock, but it seems some people have no respect for others' property...and possibly had no idea what they were doing to our beloved station!  I thanked him very much for his time, realizing he was very busy and he gave me his contact information.  (By the way, we were told later that the vandal was locked up safe and sound in jail....bs)

Well, I got my breath, hiked back up to the car and we went on our merry way, over toward Scott and Keo, AR, because Charlie wanted to show the girls a great antique mall over that way.  Unfortunately, it was closed on Mondays, so we just toured around looking at the storm damage (tornados and straight-line winds had done some extensive damage in the area).  We stopped by another little store and eatery called Cotham's Merchantile, but they were also closed.  Heck, since the scenery was so pretty, we thought we'd shoot some more photos, so here's Charlie and I on the porch of Cotham's and near the lake: 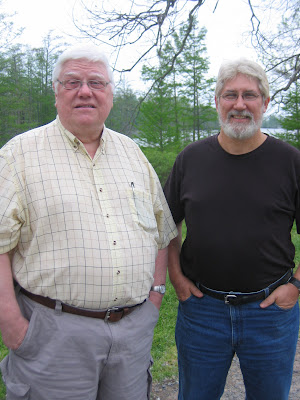 After stopping elsewhere for a soda pop and other refreshments, we decided we needed some real sleep.  It had been a busy afternoon, so Charlie dropped us off at the motel once again and we sat around in the reception area, just jawing for at least another hour.  Since I was on my own "with the guys" the next day, Charlie told the ladies what to look for downtown and more local attractions.  They also went digging for diamonds later Tuesday afternoon, but only found some jasper and quartz.