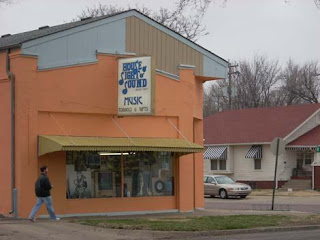 Record stores are a dying breed, and we can blame the record companies for this as much as anyone.   Every time a record store goes down, we lose a bit of our heritage, our culture.

It happened again, yesterday: after 40 years, the House of Sight and Sound in Salina, Kansas, closed its doors.  (Salina --- pronounced, "sa-line-uh" --- is a smallish town located halfway between St. Louis and Denver, on U.S. Interstate Highway 70.  It's a surprisingly interesting place: Jonnie King visits there each July for the KKOA Custom Car Show, and there's a lively arts and music scene:  Check out  www.stiefeltheatre.org  and  www.salinaartcenter.org ).

Now, I don't live in Salina, but I've been shopping at the House of Sight and Sound on-and-off since 1974 --- almost all of its 40 years of existence.  The store was primarily a music store (LPs, cassettes, 8-tracks, CDs --- heck, the last time I was in there, they still had a rack for 8-tracks!) but they also did car-stereo installation; sold head-shop and smoke supplies; and for a short time even marketed some of the Priscilla-style stuff.  It was a kind of One-Stop Shop for All Your Home Entertainment Needs.   Up to the very end, the House had a massive collection of popular music from the 50s up till almost-today.  It was the kind of place that mom, pop, the kids, even grandpa, might find something they'd like to listen to.  Lots of families shopped there.  I found a lot of stuff there.

The store's closing just yesterday really pains me, and this little posting is my obit for a unique institution that will never reappear.

The House of Sight and Sound existed due to the management genius of Tom Headlee.  The first time I visited the store, back in the fall of 1974, I expected to find the usual "head-shop-style" staff, stoned and disinterested.  Instead, there was this quiet, soft-spoken fellow with short hair and a big smile who genuinely appreciated my business.   (I remember what I bought that day: a German LP import: "UFO - Flying: One Hour Space Rock"!  This was pre-Michael Schenker by the way....)

After shopping at the House multiple times, I got to know the soft-spoken fellow, who was the manager and whose name was Tom.   I asked him, "Tom, are you from around here?"  Tom said, "Nope --- I'm from Tennessee."   So I asked, "Tom, how did you ever find your way to Salina, Kansas?"  "Well," Tom explained, "I always wanted to live in the mountains, and a friend of mine wrote me and told me that he opened a new record shop near the Rockies and he asked me to come out and take it over.  So I came here, to Salina, where the shop was".   Unfortunately,  Tom's friend failed to explain to him that Salina is a 6-hour car drive "near" the Rockies, but the deed was done, and Tom stayed in Salina and managed his friend's store.  He met his wife, married, raised some kids, and became a grandfather.   All the while, he built the coolest record store, packed from floor to ceiling with the most eclectic inventory one could imagine.  (Tom once told me, "I like the strange stuff."  To Tom, Captain Beefheart was mainstream.)

Tom certainly had an ear for 60's and 70's psychedelia, metal, and all their offspring.  This was the store's strength --- it was The Library of Congress of Acid/Hard Rock.   When the decades rolled into the 2000s, Tom struggled a bit at ordering inventory and admitted to me that he sometimes asked his grandkids for advice.  Still, there was never a problem dropping into the House and getting a replacement copy of anything by Iron Butterfly or Motorhead --- LP, cassette, CD, 8-track --- take your pick!

As the years moved on, and I found myself in Salina less and less frequently, I lost track of how the House was doing.  But the last few years, I made it a point of stopping in every few months and chatting with Tom.  He always recognized me (although not always remembering my name), dropped what he was doing, and came out from behind the counter into the aisles to chat for 5-10-15-whatever minutes.  The last year or so, the news wasn't so good: business was slow and people weren't spending their tax refunds on new car stereos like they used to do.  Tom's bad back was starting to be a problem.   Last autumn, he told me that Christmas 2010 might be the signal whether he should keep the store going or think about doing something else.

Today, I was on the road, heading home after attending a funeral, my uncle's. (There are too many funerals to attend these days, alas....)  I had just enough spare time to take the Interstate Exit at Salina and stop at the House, to say hello to Tom.   I turned into Salina, rolled down South Santa Fe Avenue, saw the House's signature pink building, but its sign was gone.   I slowed down, stared into the front window --- where were all the shelves, the stock?!   I saw someone inside.  I parked the car and hustled to the front door --- locked!

Then I saw the sign: "Our last day is May 29.  Thanks for your patronage."  Rats!  Double Rats!  I looked inside and saw Tom.  I pounded on the window.  As usual, Tom dropped what he was doing --- in this case, he was disassembling the counter that he stood behind faithfully for 40 years --- and came to the door and let me in.   I couldn't believe what I was seeing: The last of the House of Sight and Sound being disassembled and loaded out the back door into a truck.   One long-term employee was standing there, staring as if in shock.  Tom explained to me that it was time to quit --- not enough business to make ends meet.   I realized that I had just attended one funeral and had found my way to another.

I asked him, "Tom, what happens next?"  Tom replied, "I've always wanted to live in the mountains and run a record store.  I think I'm going to give it a try...."

Thanks, Tom, for the music and the memories.  I hope it all works out for you --- you deserve it!

Here's a photo of Tom and one of the last staff line-up at the House of Sight and Sound.  In the staff photo, Tom's wife, Sherry, stands to Tom's left: 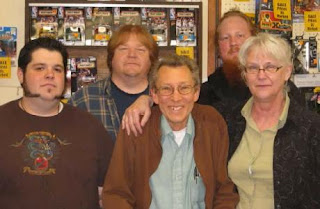 P.S.  The above is how I remember it.  After I came home from saying my good-byes to Tom, I checked the web and learned that the House announced its upcoming demise to the world last March.  Here are a couple of articles that were posted:

There is even a tribute Youtube video out there:

Tom maintains a web site for the store:  houseofsightandsound.com
Posted by   at 8:54 PM