Eric Lensing, a.k.a. "Eric Thomas" and I have been corresponding.  He sends more goodies for us to share here, along with his story.  Eric mentioned, "My first true love was radio and I kept quite a bit of stuff when I was in the position to acquire it."  I, for one, am certainly glad he saved stuff from the round file!

Eric also mentioned to me that he took his dad's name, Thomas, as his air name, hence, Eric Thomas; what a way to honor your dad with a successful career!

Enough said, I want to share Eric's story with you, dear visitor, with some memorabilia sprinkled about:


"Everybody has interesting stories - as far as my story – I contacted Dick Downes, who was PD at KAAY, during early 1977 and offered to do anything pro-bono at the station. He was very kind and hired me to do some local callout research on weekends. Yep, I went to the station, got out a phone book, hooked up a cart deck, and commenced to call people at random playing 10 second snippets of songs and asked the caller to rate them from 1 to 10. Amazingly enough, I was rarely hung up on back then, haha! Dick also allowed me to sit in during DJ Joe James weekend shift and just observe. Wow, what a pro! He had come to KAAY from a powerhouse station in Cleveland, OH. I can’t recall which one. But Joe James was such a great jock.

Soon afterward, in the same building, easy listening KEZQ changed formats to KQ94 and Stuart McRae became its program director. He was very kind to me and kind of took me under his wing. He allowed me to be on the first “KQ94 Rock Advisory Board” and later go on-the-air for the first time in LR between 1am-4am every now and then to get the feel for it. I laugh at it now. Man, I was so shell shocked and tentative. But it was SO MUCH FUN. A great big thanks to Stuart, Bob Majers (KQ music director) and Dave Freeman (KQ 7-12 jock) for their patience and help and patience. Great times. Yea, I was still in high school and my parents let me pull the all-nighters as long as I went to school the next day. I was never asked to don the KQ94 Kangaroo costume for local remotes and outings, but I knew someone who did. Let me just say it was a hot job.
And that is how I got my start at KAAY and KQ94. So, I was actually on FM before AM. A few months before my high school graduation I got my first “real job” doing all-nights at local competitor KKYK (working for a wonderful PD, Jim Cassidy, whom I really loved for having faith in me). Over a year later I came back to KAAY and then bounced from KAAY to KQ94 – from control room to control room. Steve Kelly was PD of both stations at that time and was one heck of a go-getter. He was a hands-on boss who came to Multimedia after being a record rep in the Texas area. He knew the biz and treated me well! And I loved every single minute on KAAY. It was my dream station as a kid and I had so much respect for the station and all who were once on it.

In fact, I it was during a Memorial Day holiday weekend when I was doing a 7-12 shift on KAAY when I got a buzz from the front door of the station. A guy came on the intercom saying he once worked on KAAY and was driving through and wanted to show his wife or girlfriend the station.  I let him upstairs and we talked a bit and he was so happy to see it all again. I asked him what his on-air name was and he said  Steve Scott! The guy I admired and listened to all of those evenings when I was growing up – was right there. That was a magical moment! Dreams do come true." 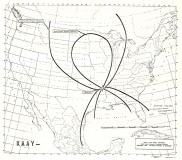 I mentioned to Eric about being one of "The Greats"- and he humbly said that he was in the presence of the greats, such as "Clyde Clifford, Joe James, Steve Scott, Stuart McRae, Wayne Moss, Marvelous Mark and all the others."  I am still of the opinion that if one had the opportunity to work, er, PLAY at the 50,000-watt blowtorch KAAY, they were indeed in great company....

Thank you, Eric, for sharing your story!  We hope to hear of many other dreams that came true in your career at KAAY!