Felix McDonald And The RCA Transmitter

I was reminded of a story by an anonymous commenter, one that has been recanted over and over.  It is the awesome, fantastic, wonderful story of when Felix McDonald had repaired the RCA transmitter when NO ONE else could.  Here it is as it was related to me....

Seems as if he was on vacation in Texas and the transmitter had gone down.  Technicians had been called in, even those from Channel 11.  No one could seem to get "Big Mama" (as David B. Treadway lovingly calls her) back on the air.  Pat Walsh was so desperate to get KAAY back on the air, he chartered a private jet to go and get Felix and bring him back.  When the plane landed, Pat picked Felix up and screamed though the traffic, getting him to the transmitter site.

Upon arriving, some wise guy said, "Let's see YOU get this thing going, boy!"  Felix methodically put parts back where they should have gone, then asked someone to hand him a broom.  He reached over and shoved a contactor back into place that had been opened (for what reason? No one knew) and the RCA roared back to life!

When I was in Little Rock on vacation back in 2011, Jerry Sims, David B. Treadway and I visited Felix; David B. had to take his son back to town, so Felix and his wife invited Jerry and I to come in and visit a while.  Here's a picture of these three Greats before out visit: 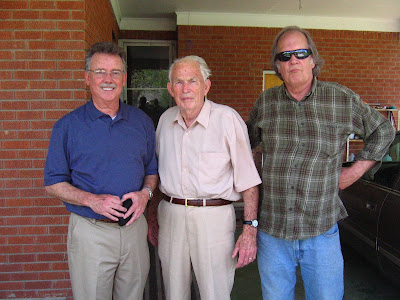 As to the aforementioned legendary story above, Felix went and got a commendation written by then Operations Manager Wayne Moss: 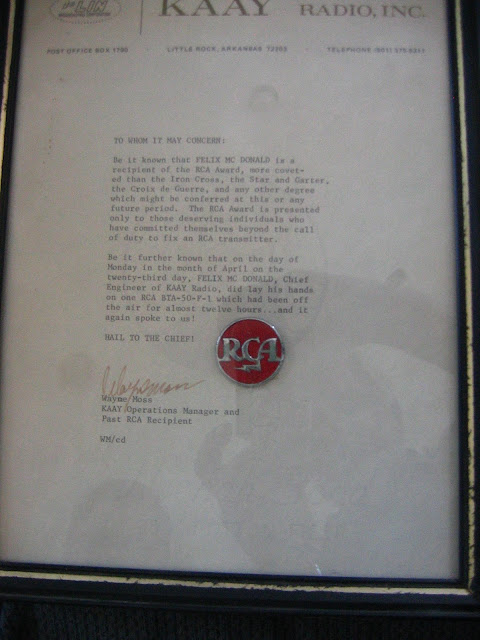 What a story- what a man- what a legend!

When we left to leave, Jerry was almost out the door when Felix pushed past me, grabbed Jerry by the shoulder and turned him around.  It had been SO long since he'd seen Jerry that he didn't relate the Jerry Sims/"Sonny Martin" of yesteryear with the Jerry Sims of that day...but he said that he FINALLY put together who he was.  Then the tears almost began to flow for all of us.  I was so moved and stunned, I forgot to "roll tape" or take pictures of this now great reunion of these two Greats.

Now, I'll bet that Felix and Jerry are in "radio heaven", if there is such a place, having some good laughs and great memories.  I was SO blessed to become friends with these men- and hope to see them once again, myself.