Beaker Street is perhaps the last existing artifact of the "classic KAAY", and last night, another milestone was reached.

Clyde Clifford's final Beaker Street on KKPT was yesterday evening, February 6. Despite the conflict with Super Bowl Sunday, the show's audience were out in force, and a good evening was had by all, certainly more of a party than a wake.

One high point was the 9pm segment, when all three hosts of Clyde's FM era, Mark Arouh, Wil Warren, and Scott Reed, gathered in the studio and related how they became involved with the show.

A true professional, Clyde presented an evening of Beaker-Street classics and cuts that should have been classics "back then," if only they had been recorded "back then". You can read his playlist at the show web site:

Here's a photo, courtesy of Matthew Travis from his Facebook posting, of Clyde in the studio on his last KKPT night. 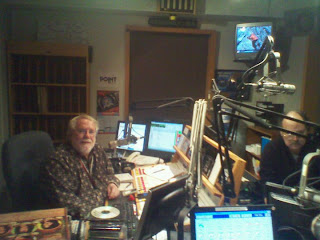 What happens next ? It seems that Clyde has next Sunday off --- when I spoke with him on the phone last week, he said he's had only 3 Sunday evenings away from the radio studio in the last ten years, and he thought it might be nice to spend a Sunday evening with his wife !  Clyde is venturing carefully into the "third age" of Beaker Street, deciding upon the format, venue, and location.

The Blog has recordings of Clyde's last KKPT show, and these will appear in the not-too-distant future, for those folks who weren't able to listen last night....