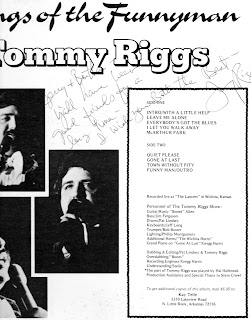 Thanks to Jerry Sims for this touching, important and warm piece of history.  To even call such a gift "history" doesn't give it justice, but I'm glad he shared it with us!

Tommy was a consumate performer, loving to sing, even to the point of putting a keyboard in the studio, playing and singing live on the air, according to a conversation I had with Charlie Scarbrough awhile back.  Needless to say, Jerry's gift to us and the blog is SO important!  It is a portion of the album, "Songs of the Funnyman".  The note reads, "Jerry & Bertha- Y'all have been good friends for a long time.  I wish you both the best. Tommy Riggs"

Here are some of Jerry's comments: "Tommy was a great entertainer. We were big fans of his. He was particularly good with blues stuff. I remember I used to get irritated when I would get him to do a particularly sad song, like "St. James Infirmary", when there he was, literally on his knees crying, and the audience would be laughing, drinking and carrying on, as if nothing was going on. My favorite song on the album is "Leave Me Alone". But again there's "Mc Arthur Park"....another favorite. Possibly I can send it to you sometime for the blog.  Oh yeah, the Tommy album was recorded live at a club in Wichita, Kansas."
Jerry told me that late one night, someone called in while he was on the air and asked for a job...that someone was Tommy.  "Tommy was on tour, somewhere in the mid-west, when he called me, on the all night radio...."Tell me you are Jerry, and get me a job" I did, too."  He came back as a "Robbins", but whether he was a "Rob", a "Rock" or a "Bob Robbins", I can't recall...Jerry will have to remind us...but Tommy, well-loved in many respects, worked at KAAY several times when he was not on the road.