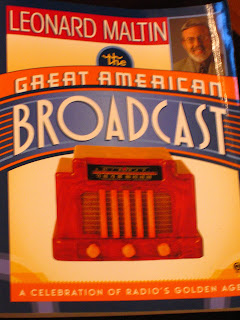 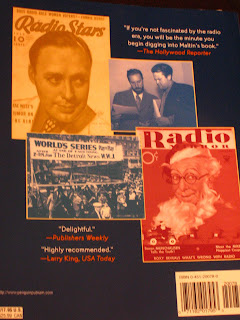 Ah, the Golden Age of Radio!  This is a nice book, written by movie critic Leonard Maltin, about those years from the 1920s to the 1950s.  Neatly written over a period of eleven years, Mr. Maltin covers the radio actors, the audience, humor, etc. with neat precision.  Arkansas' "Lum and Abner" are covered in this book, as well....here are a couple of pictures- I apologize for the graininess, my fault in reproduction: 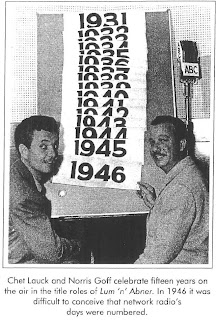 The caption reads, "Chet Lauck and Norris Goff celebrate fifteen years on the air in the title roles of 'Lum 'n' Abner'.  In 1946 it was difficult to conceive that network radio's days were numbered." 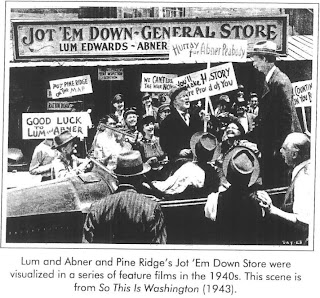 The caption reads, "Lum and Abner and Pine Ridge's Jot 'Em Down Store were visualized in a series of feature films in the 1940s.  This scene is from 'So This Is Washington' (1943)."


Many radio actors became movie actors, like H. G. Wells, Jimmy Stewart, George Burns, and others, sometimes successfully, others not so, like Clark Gable and Gary Cooper.  Many times, movie and theater actors found steady, monetarily rewarding work behind the mike when otherwise unemployed.  Maltin explains many behind-the-scenes facts, backed up with quotes and pictures.  A fine read!

Nowadays, there's very little live radio, except for some programs on National Public Radio (on which David B. Treadway has participated in, a few times there in Little Rock), and the Grand Ole Opry, broadcast on WSM out of Nashville, TN, 650 on your AM dial....there may be a few others....

Thanks to my lovely wife for buying me this book; it has provided many an entertaining hour and proven to be a valuable resource.