A couple of weeks back, DAVID NELSON passed away. David was the last link to one of Radio/TV's longest running dynasties the "Ozzie & Harriet" Show. With that in mind, I again went to my Audio Archives to pull out one of my favorite Interviews: The
Legendary Rick Nelson in October, 1981 to share with my friends here at our KAAY Blog: 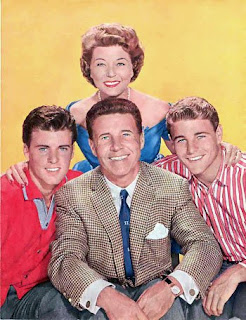 RICK NELSON was one of the earliest Superstars Of Rock & Roll, and Elvis' closest rival during the mid-fifties. He was in all regards one of the '50's first "Teen Idols".

That Time Period of the 50's was the birth of the "Music Revolution" that REALLY lead to "CRUSIN", AND the lifestyle that a lot of us enjoy to this very day !


It was an era of blending rock/country/rhythm & blues/pop music to listeners across-the-board. Elvis, Johnny Cash, Carl Perkins, Eddie Cochran, Gene Vincent, Jerry Lee Lewis, and lots of others were cranking out hit-after-hit.

BUT, RICK NELSON had a Secret Weapon that had never been tried to the fullest extent yet: A weekly TV Show ! And that's one of the cool things we talk about in the Interview.


With hit records like "Be Bop Baby", "Waitin' In School", "Poor Little Fool", "There'll Never Be Anyone Else But You", "Travelin' Man", "Hello Mary Lou"...and many, many others his place in R&R History was set into place.  Rick Nelson was the 5th biggest-selling male artist of the 50's.

In this Exclusive October, 1981, Interview, Rick talks with me about his early years, how his girlfriend gave him the idea to record to begin with, and his first Million Seller: "I'M WALKIN' ". (NOTE: Legendary Guitarist, JAMES BURTON, plays lead with Rick's group. He's a Hall Of Fame Member himself.)

Please enjoy this story on a Special Tribute Page that I've set-up for Rick which is one of my All-Time Favorite Interviews, with a man who was truly a Hall Of Fame Legend. Just click-on here to listen...and make sure your speakers are turned up. http://d10514412.u46.c5.ixwebhosting.com/gpage100.html

SPECIAL NOTE: Rick Nelson was Inducted to the Rock & Roll Hall Of Fame on January 21, 1987.  John Fogerty of Creedence Clearwater Revival was his presenter.