(This is a great account by David B. Treadway about when we were looking for Glaspie...bs) 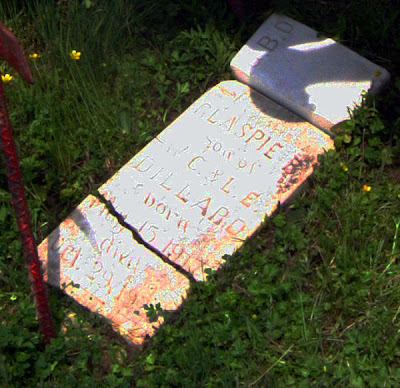 During our pilgrimage to the KAAY transmitter site on April 19, 2011, Jerry Sims, Bud Stacey and I walked among the three towers in a field of tall grass and crawdad holes. Though not as pronounced as inside the building, there were signs of the sad neglect that has befallen The Mighty 1090. Counterpoise wires drooped when they should have been tight. The conduit that contained the feed lines to the west tower lay broken on the ground, thanks to the recent work of copper thieves. And the grass was high and ragged, years since Felix McDonald grazed cattle there.

I was hunting the tombstone of little Glaspie Dillard under that west tower. You've seen a couple of references to his name here on the Blog--and there's been a bit of controversy about him. Well, on this fine afternoon, I had witnesses with me. We were going to look at that tombstone and read the name of the child who had been buried in that field ninety years ago. There would, at last, be pictures of his marker and what little we know of his story would be told.

We fanned out and searched a good while to the north of the west tower, which is where I remember seeing the stone in 1971. It had stood almost upright, leaning maybe fifteen degrees back toward the building, with Glaspie's name and span facing roughly south. But we couldn't find a trace of it, sitting up or lying down. And here came the questions: had it fallen at last and been overgrown by the grass? Had Dillard descendants finally come to claim it? Had it been removed in an effort to damp down questions? Did I simply not remember its location--or had it never been there at all?

We looked for a bit longer. Then, deciding that it was just another lost trace, ambled back to the transmitter building. That was when Frank, the Citadel engineer, asked us if we had seen the tombstone! I told him we'd been unable to locate it, and he said, "Come on, I'll show you." So we piled into his four-wheel-drive pickup, Bud and I riding on the tailgate as country boys will do.

Back to the west tower we went--and Frank led us to its south side. The others saw the stone before I did: flat on the ground, lower third broken across and marked by a piece of rebar that had a cultivator foot welded to it, a Radio Cross to designate a grave. Except that the grave wasn't where it was supposed to be. I remember it being on the north side of the tower. But who's to say what happened to the headstone and its companion footstone (which I had never noticed) in the stretch of forty years? Vandals could have smashed it at the same time they decided to move it.

And what happened to little Glaspie B. Dillard in 1920? There was an especially nasty strain of influenza in Arkansas at the time. Was that what took him out? Was it some dreadful farm accident? Was he trampled by a horse or bitten by a cottonmouth? Did he live long enough to have any fun at all? What became of his parents? Did he have brothers and sisters to miss and to mourn him? Where did his family go? Did his death just suck all of the life out of them, forcing them to move away and try to forget the heartbreak?

The story goes that the proposed site for the KTHS transmitter relocation from Hot Springs was a cemetery, but the location was so prime for an AM facility--so perfectly matched to the specs--that family members were contacted and the graves were relocated. Except for Glaspie's. And there he remained while towers were erected and copper ground straps were laid above his little face. Sometime in 1952, some engineer threw a great big switch and fifty thousand watts of energy hit the earth that held a child's coffin. I'll bet he ain't slept a good night since.

I asked Frank if he had any Native American blood and he said "No." So he might not understand that that transmitter site was put in on a burial ground. There are prayers and rituals that need to be undertaken before you disturb such a sacred place--if you do it at all. I'm not sure that these were done, despite what I take to be the Cherokee ancestry of one of the engineers of the time.

Just before we left the west tower, Frank said, "Sometimes when the Moon is right, I can hear a three-year-old child crying out here."

David B. Treadway
Holiday VII
The Last PD
Posted by   at 3:39 AM