With most of the bad weather gone, it was a wet, slightly sprinkling morning when Jerry Sims picked me up.  The agenda was to head over to the Butler Center For Arkansas Studies, where the Encyclopedia of Arkansas "resides", among other things.  I wanted to meet the folks who helped me get my entries published on KAAY and KTHS....

Upon arrival, we were directed upstairs and met with Ali Welky.  At the time Jerry and I arrived, several key people hadn't arrived; Guy Lancaster was home, cleaning up storm debris from the night before, Nathania Sawyer was on vacation and Jasmine Jobe hadn't arrived, as they thought she wasn't coming in due to weather, as well.

As we spoke, Jasmine arrived!  She perservered and came in.  We spoke a few minutes, then asked if Jerry and I could get a picture with them: 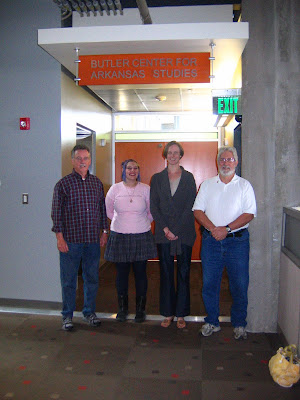 That's Jasmine next to Jerry and Ali is next to me.

As we spoke, Ali went and got Michael Keckhaver, the man responsible for media in their department.  Jerry had gone back to the car and gotten some of his materials to show Ali and she immediately got Michael.  He pored over the materials and Jerry gave him permission to scan and catalog whatever he wanted.  The awe that these folks displayed was immediate, as they are "all about" preserving Arkansas history.

As Michael was scanning, I realized who he was; he was the gentleman who handled my media for my entries into the Encyclopedia of Arkansas!

After Michael got through with Jerry's materials, Jerry took a picture of us: 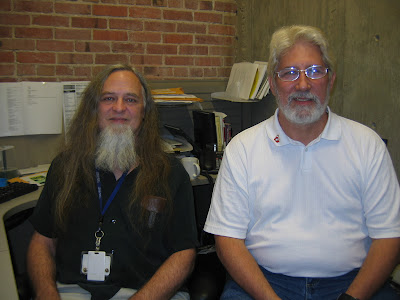 Please note that I am proudly wearing my Encyclopedia of Arkansas lapel pin!

Michael is an accomplished musician and also broadcasts a show on a local college station on weekends.  Michael said in an e-mail to me:

"The show is Sunday night, 9:00 p.m. to whenever. KABF 88.3 FM community radio. It’s called the Music Is The Best Show. Thanks! We play primarily unreleased bootleg live recordings."

Check into the website and listen to the stream:

We had even more to do, so we said our "see ya laters" and headed out into the rainy day for lunch...and other Little Rock sites of interest!