My Trip To Little Rock: Tuesday, Searchin' For Glaspie

David B. Treadway, Jerry and I all went out in search for the legendary grave of Glaspie Dillard.  Seems as if folks intimated that it was only a legend.  I guess that's the drama and romance of keeping a legend alive.  Nonetheless, we set out to find his grave.

David B. was saying that he thought it was somwhere, but time dims memories.  We all set out looking: 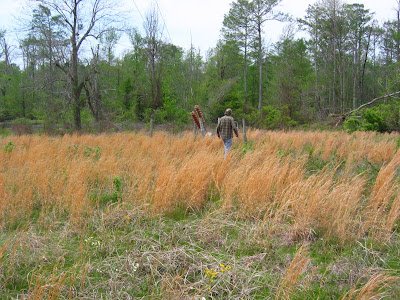 My, but that grass was tall.  As I walked, I noticed crawfish holes all over the place!  Wet enough for good ground conductivity.  I'm glad I wore my U.S. Coast Guard "boondocker" boots this day, as it was rough going for anyone in street or tennis shoes.  I was also concerned about snakes, but David B. said over and over, "Snakes don't like RF!"  ("radio frequency" energy).  Can you imagine how your hair would stand up in that energy field? 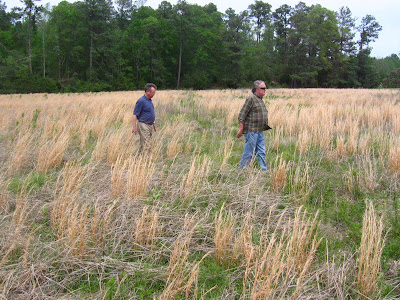 ...but Glaspie is eluding us.

We'd walked back to the transmitter building (a LONG way away, as you'll soon see!) and mentioned to one who will be known as "Frank" that we never saw the grave.  "Frank" immediately proceded to take us back out to the west tower and walked us right up to Glaspie's grave- we were on the wrong side all along!  It is at the base of the west tower, on the north side of the tower just ouside the cage...here's the legendary grave: 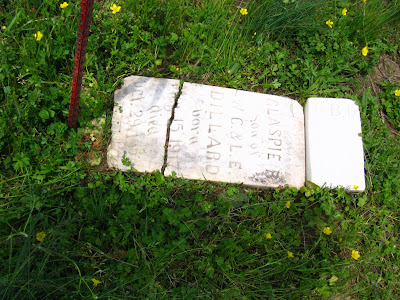 When David B. saw the marker, he shouted that he "KNEW it was Dillard!".  Seems as if there was some confusion about his last name as the legend got passed around.

It took me a couple of tries, due to the light, to get a decent photo (I'm thankful for instant digital photography, you can instantly review and delete any bad material), and, in case it's not very legible to some, her is how the marker reads:

Here's David B. and Jerry posing with Glaspie: 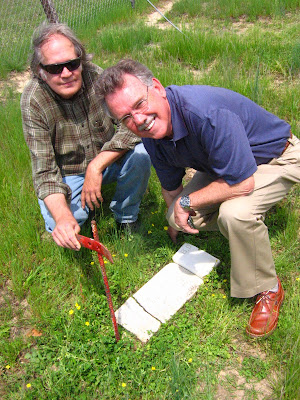 Obviously, the red-painted cross isn't original, probably put there to keep anyone mowing the site wouldn't run over and further damage the marker.

Legend has it that when the graves in this original area were moved, no one could find any remaining family of Glaspie's to get permission to move him.  "Frank" told us that, instead, not enough of Glaspie himself could be found to be moved, so he was left in peace....

This reminds me of more "spook" stories; "Frank" told us one of  his own.  He said that, it could be gospel, it could be legend, but on a windy, stormy night, if one listened, he could hear the sound of a small child crying in this area....

The other "spook story" is one Clyde Clifford related in an interview, where Tommy Riggs ("Rock Robbins") had arrived late one night at the transmitter site, a bit inebriated.  Tommy said he wanted to spend some time with Glaspie and headed out into the field.  Here's the interview Richard Robinson had with Clyde Clifford:

Now, there's a little bit more to the story.  David B. corroborated something in the story about static ball gaps at the base of the towers: 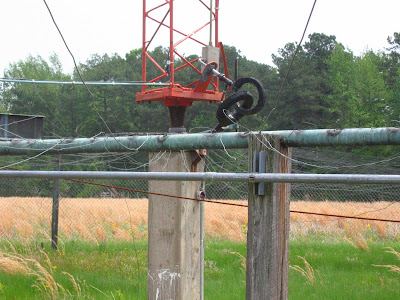 Those intertwined rings you see in the picture helped dispel static charges on the tower.  David B. said that gnats used to like to hang around them; it irritated Felix so much, he sent engineers out with cans of bug spray to get rid of them!

Now, according to both Clyde and David B., those gnats would gum up the works and during a thunderstorm, the rings (or balls, as Clyde called them) would arc over and one could hear audio from the broadcast!

Now, here's the interesting part:  Tommy is sitting, facing Glaspie's marker, when a great flash of lightening occurs, lighting up the marker and arcing over the static rings/balls.  Yes, the audio came over the arc and Tommy, who was about 350 pounds that that time, ran all the way back to the transmitter to tell Clyde "He (Glaspie), talked to me, he talked to me!" 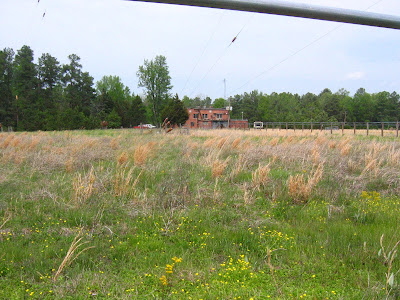 It looked to be about two football field lengths across there from where I stood taking this picture, and Clyde said Tommy made it in about ten seconds flat!  Yow!

Next, we visit the best engineer in the country, as far as we're concerned: Chief Engineer Felix McDonald!