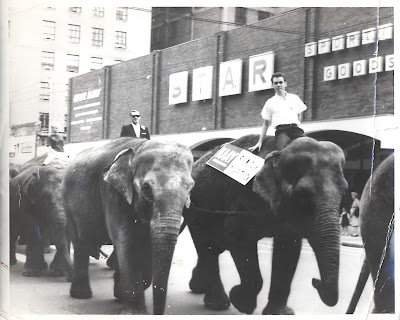 KAAY management always saw to it that we were included in every kind of promotional opportunity available. It seemed too, that the public expected us to be involved.

I always enjoyed public appearances and here is another of those I was involved in:

The Ringling Brothers Circus Train arrived in North Little Rock and paraded all its animals across the river and through town to the Arkansas State Fair grounds. Many of their animals rode in their cages, but many got to walk. We had a contest at the station to award listeners an opportunity to ride an elephant with us. Here I am in the picture riding "India", my elephant. Just behind me is George Moore from KTHV television, who I would later work with there. He did the news, "By George", and I did the weather.

It was a rather hot day for the parade and the elephants, who cool themselves by using their trunks as a big straw to spray water on themselves, did not have water on the parade. So India and her group took the opportunity to blow whatever was in their noses (trunks) on us along the way. I will never know how A.J. talked him into it, but another disc jockey riding was Tommy Riggs (Rock Robbins). Tommy was heavy and not very quick. When we arrived at the fair grounds, the handlers told us to get off quickly, before the elephants spotted the huge drums full of water. Tommy was late and got soaked. He also remarked after getting off, "Now I know what it feels like to have a baby!"