In a previous post, we did a quick tour of the Border Blaster stations and XELO in particular.

You might wonder what kind of equipment was needed to generate 150,000 KW of broadcast power. There is a great picture and story of the power tubes used, at http://hawkins.pair.com/mexblast.shtml (Take a quick look at this before reading here any further!)

Gary Wegner and Ron Henselman in Melrose Park, IL, were avid DXers and followed the exploits of the Border Blasters. Ron contributed these comments:

It is strange how stations on 800 KHz were said to be clear channel, yet I could hear as many as three of them during hours of darkness: CKLW in Windsor, Ontario (50 KW), XELO in Mexico (150 KW), and PJB in Netherlands Antilles, West Indies (500 KW). PJB was known as Transworld Radio, and they were one of the few super power stations which could change their antenna pattern to coincide with the audience who they wish to target. Since many of their early evening broadcasts were in English, I often thought they were a US station, so I tuned right past them. One night I heard them state they were transmitting from the "island of the flamingoes"; that finally got my attention. I was never excited about getting QSL cards, but I thought receiving one from PJB might be a prize. I listened for twenty minutes and wrote to them with a description of the religious programming I heard. They sent me an information packet, but they refused to send a QSL because they required at least 30 minutes of programming description.

I remained on their mailing list for the next five years. The station was run by Dr. Paul Freed and his brother. The final mailing and insult was when they notified me they were having a religious convention and dinner in Chicago, and they wanted me to volunteer to be a waiter at the dinner!

Ron and Gary had better luck with XEG, a border blaster on the Texas-Mexico border: 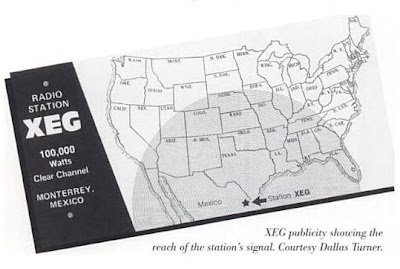 XEG-AM broadcasts at 1050 kHz in the state of Nuevo León, Mexico. Known for its border blaster status in the 1950s, XEG now uses the name "La Ranchera de Monterrey" and broadcasts ranchera music. In 1950, the advertising time on XEG came under the control of Harold Schwartz of Chicago who represented XERB, the station made famous in the movie, "American Graffiti." 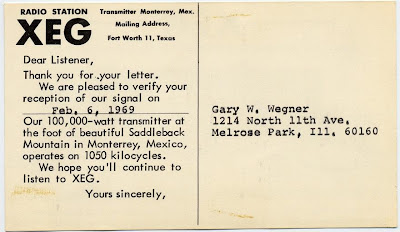 Here's the flip side: 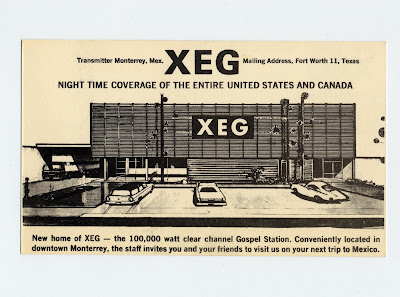 And here is a short audio clip of XEG from Gary and Ron:

Finally, here is a short clip of CKLW, Windsor, Ontario, from Ron:

There is good technical explation of clear-channel radio at Wikipedia:
http://en.wikipedia.org/wiki/Clear-channel_station

Thanks to Gary and Ron for supplying the materials for this post and the previous post on the Border Blasters!