Just got back from the yearly MAJOR Car Event that I go to every year in Salina to Interviews the Pioneers/Legends/Hall Of Famers for my WebSite. About 2,000 cars there this year...biggest year ever !

Sat. Nite at the Awards Ceremonies/KKOA Bash I was shocked speechless. Since Rods & Customs and Rock & Roll always go hand-in-hand they created the "American Disc Jockey Award" and I was presented with the "America's Top DJ" Award. Talk about speechless ! Adding to the dynamics of the moment, it was presented to me by the Legendary Builder/Designer, Darryl Starbird, who is also the owner/creator of the National Rod & Custom Hall Of Fame Museum.

George Barris "The King Of The Kustomizers" said: "Congratulations on your fantastic Award Jonnie ! Now you're Officially one of us and in our Winner's Circle !"

(BTW: A number of guys at the show told me that they used to listen to me on the Mighty 1090...nice thoughts after all these years !)
Asked the guy who owns this car to take a pic with me in it...then I took off ! Heh, Heh !!

Dat waskawy Jonnie!  He almost made off with this coooool rod! 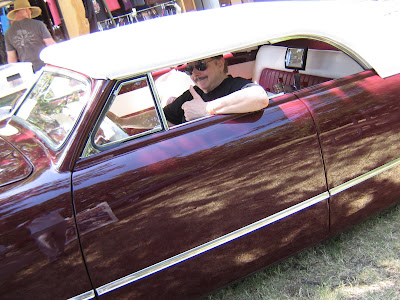 Jonnie mentioned that it was 113 degrees there at the car bash...glad you got home before you melted, Jonnie!  Hey, what radio station were YOU tuned to while cruisin' in that rod?

(And happy belated birthday!  Couldn't you talk that guy out of the rod as a present?)