The Trip: A Few More Reflections

Sometimes, when someone else is manning a camera, you can get different perspectives and other things one misses...and Jerry Sims had a few pictures of things I may have missed.  Remember back in one of the Tuesday posts where the badge on the front of the RCA transmitter was missing?  He found this one and I missed it...it must have been in the back of the transmitter somewhere, because they were using my Fenix PD30 flashlight to illuminate it: 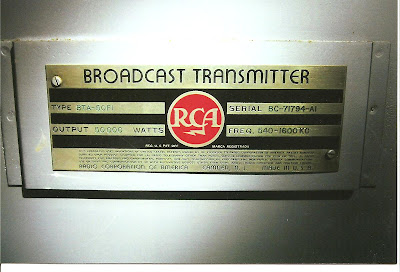 Glad I brought that light along- we sure used it, didn't we, guys?

Next, back upstairs, Jerry got a better close-up of the control in the middle of the room in front of the transmitter: 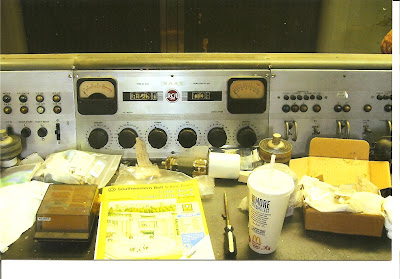 I wish we'd have pulled the junk off and made it more presentable...

And Jerry got a cleaner picture of the inside of the transmitter: 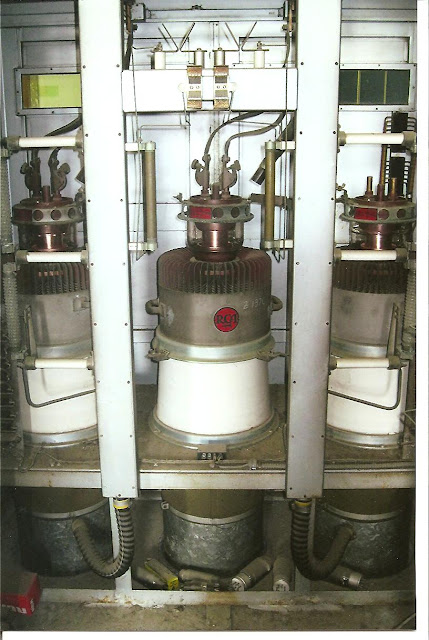 Looks like some cast-off tubes at the base of the fan ducts...?

Later, at an undetermined date after my trip, Jerry was able to go back and find something we all overlooked: the fallout shelter studio!  First, the pictures, then David B. Treadway's analysis: 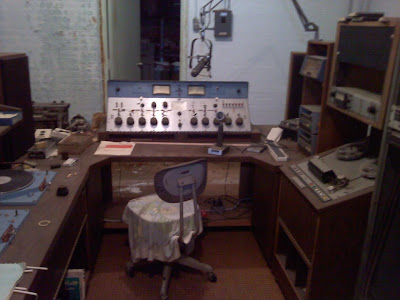 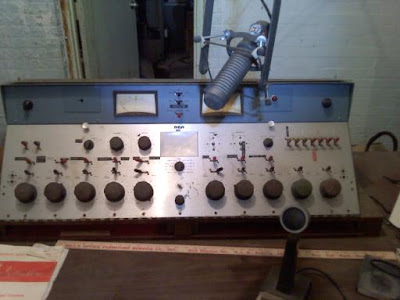 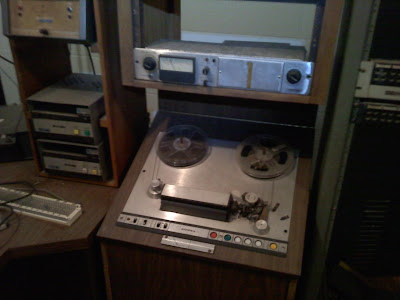 Jerry mentioned that he'd seen a door that no one went into...when he went back, he opened the door, found a light switch and turned it on...WOW!  He said it looked like someone just got up from the chair and left...there were still LPs on the two turntables!  There was also tape still on the reels of the tape machine.  Fortunately, he was able to take these pictures with his cell phone (I guess there ARE some good uses for those darned things, aren't there?) and get them transferred over to me.

When I sent these pictures to David B., he said:

"If you'll remember, I was trying to FIND the "bomb shelter" when we were there on 4/19. Maybe I should have used a different term, but I was looking for a control room that could have been used to stay on the air in time of "disaster." This is it.

In my time, it contained a Collins tube console from the production room at 1425 W 7th. Now it looks like it has the RCA board from one of the production rooms at 2400 Cottondale Lane. I'd have to see the board up-close to know which one it was, but my hands have been ON this board--and the Ampex and the turntables and cart machines."

And some comments from Dale Seidenschwarz/"Clyde Clifford":

"Back in the good old days we would occasionally have a power failure to occur at the transmitter, but not of course, downtown. Major drag! So, Pat Walsh got some sort of grant from the Fed (Civil Defense, I believe) that resulted in that big generator behind the building. I used to know all about it but I've slept since then. I think it is 250 KVA but it might be bigger. It would carry the entire load of the fully modulated BTA-50, tower lights and the entire building. The requirement was that we were to have a fully functional "fall-out shelter" studio at the transmitter site. There were to be supplies and fuel sufficient for two weeks operation. That is the studio Jerry found.

The console is unfamiliar. all the consoles (mine included) while I was at KAAY were the older beige color scheme, similar to that of the BTA-50. That one looks to be contemporary with the Ampliphase or later.

The Mic looks like an EV RE-20. The Ampex looks to be one of the newer ones from downtown."


Thank you, David!  There's no telling what we missed while we rushed through on that day, when we had so little time.

Thank you, Dale, for more insight...your thoughts and comments are greatly valued here...

And thank you, Jerry, for a little more investigative work...we'd heard about this studio, but hadn't really SEEN it before....