Again, thanks to Russell Wells and Dave S., here is an early morning program by Charlie King (Charlie Scarbrough) on January 3, 1969.  It opens with COMEX News by Mike McCormick (Barry Wood) at about 6:30 AM.  It is also a studio copy, partially 'scoped and it has many of the same ads and commercials as the previously entered Ken Knight post.

The woman's Army Corps ad was well done, as were all the other commercials.  I believe Mike McCormick did some of the ads, but I cannot capture the other voice to memory right now...maybe someone else can remind us?


(or stream/download here from the archive page)

Here's a picture of Charlie King; this particular one is from 1966: 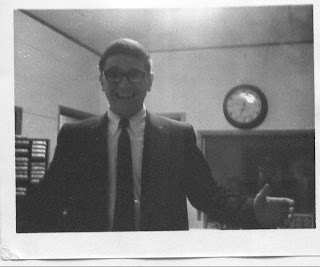