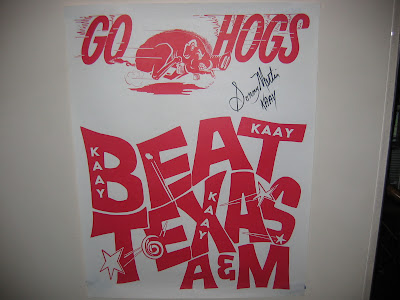 Yes, you may think you've seen this poster before...and you have, one of them...but this is one that Jerry Sims, "Sonny Martin II" sent me with a roll of them awhile back.  He'd snuck a signed one in there for me and, it being football season again, I just had to share it with you!

The note he included didn't have a date, but Jerry mentioned that he was consulting with his builder about a new house.  He remembered Jerry from his "weather boy" days on TV (Jerry's description), but when he found out about Jerry's days at KAAY, he was 'way more impressed!  Jerry had a stack left over and gave him one of these posters, which Jerry autographed as "Sonny Martin", (as he did on mine) at the builder's insistance.  He framed it and put it above his jukebox in his game room...and Jerry sent me an autographed one as well, seen above.

Jerry went on in his letter to tell me that, "Pat Walsh, KAAY Manager, would have these printed each week during the season and you would see them in windows of homes and businesses all over Central Arkansas.  We would usually hand them out (and stack up traffic) in front of the station in drive times all week."

He sent them to me the year the Razorbacks again played the Aggies and I made sure that I posted one.

This one is special to me, because he thought enough to autograph it for me.  It is much larger than the other posters I rescued during my trip to Little Rock...which, incidentally, will be posted at later dates during the football season, so tune in and enjoy!