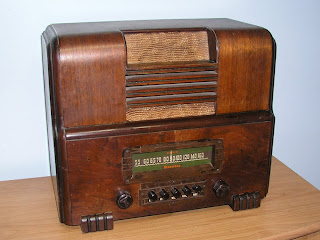 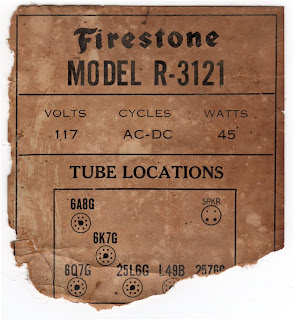 I have noted that you have a keen interest in old radios, so I thought I would pass this one along.

An elderly lady, who had lived and worked in San Antonio, had retired and was living in Arkansas. She happened to have been acquainted with my mother. When she passed away in 1976, at the age of ninety three, she left me this old Firestone push-button radio. I have no idea how old it is. The electric cord had deteriorated, so I replaced it. I plugged it in, turned it on, and to my surprise the tubes were still good, and to this day, it still works! I have included a close up photo showing the push buttons and call letters of the radio stations that they were programmed to— KTSA, KPRC, WOAI, KONO and KABC. The lettering on the back read R-312. Hopefully, you or someone can determine the age of this radio.

Thank you and best regards!

Thank you, Jim! Jim later found the radio on radiomuseum.org and it is listed as "1938?"