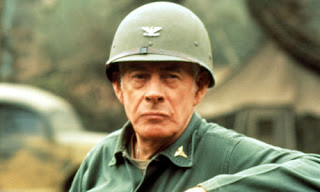 Right next to my favorite show WKRP is that of M*A*S*H; I let one of the most beloved of the show's death pass right by me in my busy workaday world...Harry Morgan, "Colonel Sherman T. Potter" passed away on Dec. 7, 2011.

M*A*S*H was a hit all over the country, but expecially to me, since having been a local civilian Paramedic so many years ago. Like the show, but in civilian life, we experienced wild, unbelievable work conditions and have blown off steam at times, much like those characters. Yes, some of us were even shot at, attacked, beat up and the like in our duties to help preserve life; other times, shattering emotions gripped us after a particularly bad scene.

Harry Morgan's character Colonel Potter was an anchor in such times; we all needed an anchor in the real world, as well. Even so, us in the civilian sector could find humor in most things, in a warped sort of way. Colonel Potter was one of those "regular Army-types" who could bend enough with his troops and still keep control and morale within guidelines.

So, with M*A*S*H ending, but living on in syndication, so will Harry Morgan.