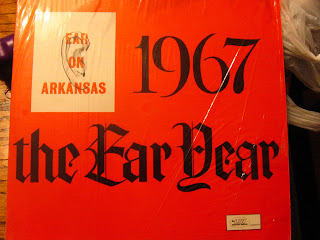 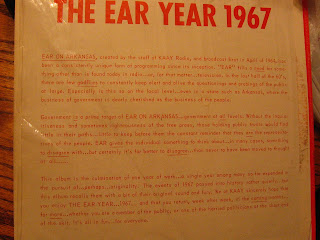 Wow, an original, from 1967!  Still in the original sleeve, with the plastic on it, opened only to get the LP out, very little wear, from Charlie Scarbrough!  The small logo at the lower right-hand corner is the LIN broadcasting logo.

"Ear on Arkansas" was a parody of the CBS television feature, "Eye on Arkansas".  The "players" of "Ear on Arkansas" were many, most all from KAAY and, from what I understand, a couple from Channel 7 and other parts unknown...I'll have to double-check that.  Needless to say, they took a comedic poke at nearly anyone and everyone involved in Arkansas politics, no holds barred!

We'll have to reach back to A.J.'s blog and pull that audio forward for a future post.  In the meantime, if you can't pull the back cover up large enough to read, here is the text:

"EAR ON ARKANSAS, created by the staff of KAAY Radio, and broadcast first in April 1964, has been a consistantly unique form of programming since its inception.  "EAR" fills a need for something other than is found today in radio...or, for that matter...television.  In the last half of the 60's, there are a few gadflies to constantly keep alert and alive the questionings and probings of the public at large.  Especially is this so on the local level...even in a state such as Arkansas, where the business of governement is dearly cherished as the business of the people.

Government is a prime target of EAR ON ARKANSAS...government at all levels.  Without the inquisitiveness and sometimes rightousness of the free press, those holding public trusts would find little in their paths...little to keep before them the constant reminder that they are the representatives of the people.  EAR gives the individual something to think about...in many cases, something to disagree with...but certainly it's far better to disagree...than never to have been moved to thought at all....

This album is the culmination of one year of work...a single year among many so far expended in the pursuit of...perhaps...originality.  The events of 1967 passed into history rather quietly...but this album recalls them with a bit of their original sound and fury.  We at KAAY sincerely hope that you enjoy THE EAR YEAR...1967...and that you return, week after week, in the coming months...for more...whether you are a member of the public, or one of the harried politicians at the short end of the skit.  It's all for fun...for everyone."