My First Radio, by Dave S.

The recent posts about radios set me to thinking about the radios I used as a kid.  (We are going back to the late 1950s here.)   My folks owned a monstrous, massive, walnut "entertainment center" in which was embedded a poor-quality record changer (built for 78s but would also turn at 33) and a surprisingly sensitive AM receiver whose signal was amplified by a tube amp.  The amp's output was sent to a 12" combined tweeter-woofer (which I fried one day some years later by routing a Gibson Les Paul Jr. into the amp's imputs and overdriving the tubes --- but that's another story).

I really liked that console radio --- when powered up, the radio static would fade in, like the tides, and the dial would glow all golden-like, just like the tubes, which I could see through the ventilation holes in the back of the unit.  Also, the radio warmed up the room (good ole tubes!), so listening to it was the perfect winter pastime.

I was too young to be allowed to use the radio on my own, and I guess I was too young to listen to rock-and-roll anyway, so when my parents bought their first television and a mounted an antenna on the roof, I got distracted by the Lone Ranger and Davy Crocket.   I liked Diz and Pee Wee on the weekends, too.

One day, when I was 7, my father brought home something in his pocket.  "Listen to this!" he exclaimed as he pulled out what looked like a fat notepad --- he turned a switch and this hissy fizzy squawky sound came out of the world's tiniest speaker.  But there was no denying that the hissy voice was the DJ at the local AM station, KXXX.    "It's a transistor radio --- it doesn't need to warm up!" he exclaimed.    I couldn't get over how small it was.

The radio my father brought home was a "six transistor" Zephyr model.   Somehow, transistors were like tubes and the more you had, the better it was.   That's all I knew, then. 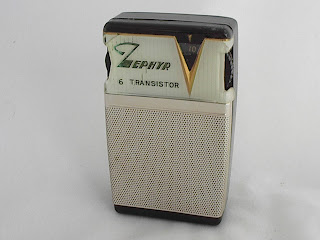 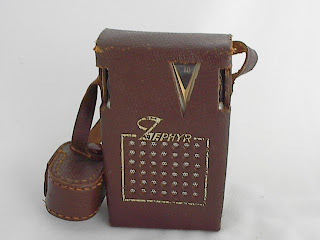 This was a cool deal to a seven-year-old: The radio had a case, so that I could practice taking the radio in and out of the case and A-B-ing the sound quality with-and-without case.  Also, I could see and use the tiny tuning dial better outside the case.  So, I developed this ritual when using the radio: I would take the radio out of its case, tune it to where I wanted to go, and careeeefullly slide the radio back in the case without messing up the tuning.  Lots of fun!

But the best part was popping the radio's back lid and looking at the parts: 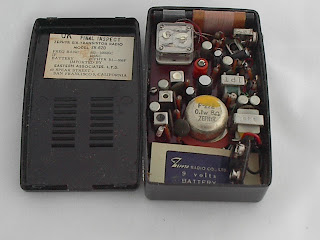 That's where I learned about capacitors, resistors, and the secret code (the color bands) on them.  I can't recall how many times I counted the six transistors --- I guess I always wanted to make certain that one didn't fall out, I guess!

I didn't like the earphone that came with the radio, even though the earphone had its own cool little case --- the radio's sound was small enough as it was without pushing it through an earpiece.

My little Zephyr ZR-620 was used a lot.  I listened to everything I could with it.  (I kind of remember listening to WLS at night.  But there was no KAAY in 1960-61.)  But transistor radios got smaller and smaller and cheaper and cheaper, and transistor-inflation meant that six transistors just weren't good enough any more.  Somewhere along the way, my little Zephyr radio was abandoned (or it died), and I bought another radio with my pop-bottle money.  (Did you ever collect pop bottles for spare cash?  That was my "summer job".)


Zephyr ZR-620
Several radios appeared under the "Zephyr" name that were quite stylish.
This is perhaps the most famous. A stylish logo and rounded corners make this one special.

P.S.  I never listened to KAAY on the Zephyr ZR-620.   But believe it or not, my parents retained the massive, monstrous 1950's console tube radio and moved it several times until it found its final home in the basement of our house in Kansas in the mid 1960s.  I used that console radio with its tube amp and that 12" speaker to listen to KAAY,  The World Tomorrow, The Soul Record Club (it used to come on at midnight in 1968), and Clyde.  Believe me, as spooky as Beaker Street used to get at 1 or 2am, it was even spookier when Clyde and Cannibas Sativa faded in and out in rhythm with those pulsating valves.  When I heard that etherial whoosh-whoosh, I thought I was pulling in a signal from outer space, because no earthly station could ever sound like that....

These days, the console radio is gone (my cousins talked my mom out of it --- they wanted that walnut cabinet), but my friend down the street built me a KT-88-tube-fired, 50-watt power amp that I use to listen to LPs and heat my house in the winter.  Tubes are great...watching those electrons splatter on the plates and generate that glow makes me realize that music occupies both time and space....
Posted by   at 5:00 AM