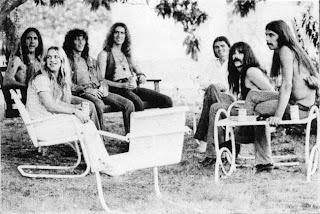 The first time I heard Black Oak Arkansas was on KAAY.  I loved their music!  I still have the album, "If An Angel Came To See You, Would You Make Her Feel At Home?" and had a bunch of 8-tracks, until they were stolen....

I didn't know until recently that they'd formed back in 1965 as The Nobody Else.  I sure know they were popular on the 1970's.  Beaker Street gave the band exposure, "which introduced the band to a national audience by making such songs as “Lord Have Mercy on My Soul,” “When Electricity Came to Arkansas,” “Hot and Nasty,” and “Uncle Lijah” staples of its program.", re: encyclopediaofarkansas' link below.

All I know is, Jim Dandy Mangrum's gravelly voice, like Wolfman Jack's, was appealing to lots of us listeners, but it sure was hard to emulate either....