There have been several blog entries about the KAAY signal being received in other countries, including South Vietnam.  Dale Seidenschwarz ("Clyde Clifford") said that he used to get letters from soldiers there, indicating that they had heard "Beaker Street."  He did not keep the letters, unfortunately.  I have one letter, which I received from Pat Walsh, which reports the reception of KAAY at a Royal Air Force Base in England.  I do have copies of letters from Cuba, as well as numerous states throughout the Midwest.  Pat Walsh told me that they received letters and post cards from persons who picked up the signal of the station while going through the Panama Canal on a cruise ship.

As a historian, when something is claimed, you do your very best to "prove" that something actually happened.  The stock question is, "Is there evidence?"  While there have been claims that KAAY's signal made it to South Vietnam, I have no documentation or proof that this occurred.  Some engineers say that it is not possible for the signal to reach that far, and others say that if conditions were right, that it could happen.  Other than the letter about the reception in England, letters from Cuba, and documentation that the signal of KAAY reached 15 foreign countries (none of which included South Vietnam), I cannot say with any certainty that the signal reached Southeast Asia.  If someone out there does have such documentation, I would certainly like to speak with them about it.

One thing is certain - KAAY put out (and I suppose still puts out) one heck of a signal.  It has been referred to as a "blowtorch" station, due to the powerful reach of the station.

According to KAAY documentation (a brochure), the following pieces of mail were received during a six-week period, January 27 through March 7, 1964: 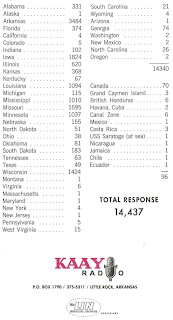 Here is the letter stating reception of KAAY at a Royal Air Force Base in England: 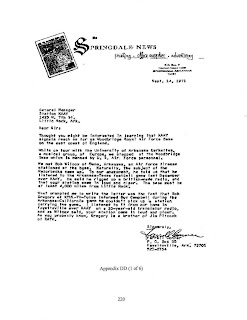